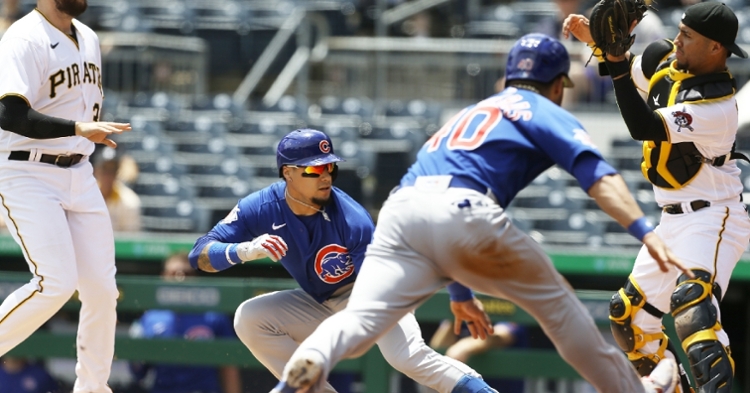 El Mago's magical play against the Bucs was No. 7 on the list (Charles LeClaire - USA Today Sports)

It was a season that featured many ups and downs for the Chicago Cubs. For part of the year, the Cubs spent the season in first place. Then an 11-game losing streak sped up the process of a long-dreaded rebuild — and the Cubs said goodbye to over ten key players at the trade deadline, including World Series Champions Anthony Rizzo, Kris Bryant, and Javier Baez. The Cubs ultimately lost over 90 games, finishing fourth in the NL Central and missing the playoffs for just the second time since 2015.

However, there was plenty of good moments for the Cubs.

They sent Kris Bryant and Craig Kimbrel to the All-Star Game, the Cubs pitched a combined no-hitter and had their fair share of walk-offs to ignite a Wrigley Crowd back in the seats for the first time since 2019.

So, we at CubsHQ thought we would count down the ten best moments of the Cubs season. Here is part 1, 10-6 in our top rankings:

In April, a struggling Joc Pederson sent his first Cubs home run into the right-field seats to give the Cubs the lead over the Brewers. These two homers were insanely entertaining, and so far apart, it feels like it happened in a different season. In the dugout, the Cubs bench gave Pederson a waffle maker, and he went on a bit of a hot streak before getting traded to the future World Series Champion Braves before the deadline.

Then, Cubs first basemen Frank Schwindel — yes, that still sounds weird to say — was on a hot streak in September after the Cubs had traded away most of their team. Schwindel hit six home runs in seven days, topping it off with a go-ahead grand slam against the Pittsburgh Pirates. Schwindel, a rookie, closed the season with the best batting average from August on and took home Rookie of the Month honors.

Speaking of rookies, Patrick Wisdom put together a season to remember for the Chicago Cubs. Playing all over the diamond and eventually taking over third base for the traded Kris Bryant, Wisdom set the Cubs single-season rookie record for home runs in a season with 28 — a record previously held by the aforementioned Bryant with 26 in 2015.

It wasn’t sexy as the Cubs lost this game by plenty, but Anthony Rizzo striking out the NL reigning MVP and fellow star first basemen Freddie Freeman back in April was must-see TV. Rizzo has a career 0.00 ERA as a pitcher and notched his first career strikeout against Freeman in late April, a game the Cubs allowed over ten runs.

As a Chicago Cub, Javier Baez rightfully earned the nickname “El Mago” for doing magic-like things on the base paths, in the field, and at the plate. But in a late May game against the Pirates, Baez may have outdone himself.

Baez hit a grounder, and the throw pulled the Pirate first basemen off the bag, and all of a sudden, Baez was running back toward home plate and getting chased. He eventually evaded a tag, a run scored, and Baez ended up on second base after a pair of throwing errors by the Pirates — all with two outs in the inning. The only way to explain that play is magic.

No. 6: Cubs comeback vs Cardinals

In July, the Cubs put together their biggest 9th inning comeback in over 40 years against the rival Cardinals in St. Louis. The Cubs were down 6-1 and won the game 7-6, thanks to errors, wild pitches, walks, and an Ian Happ go-ahead two-run double to give the Cubs the lead and the comeback victory.