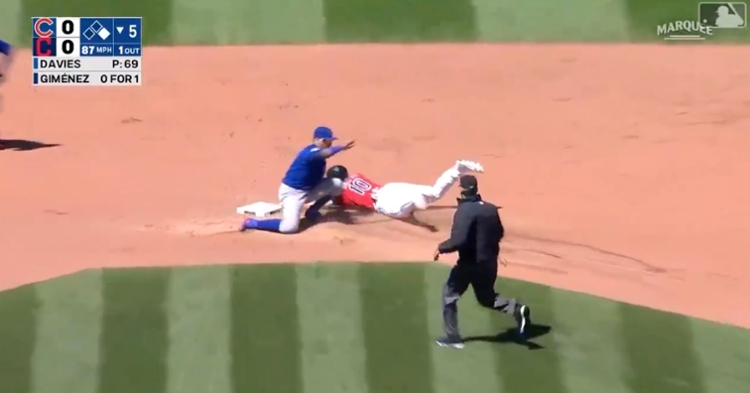 Javier Baez applied a no-look tag as part of a "strike 'em out, throw 'em out" double play.

CLEVELAND — The fifth inning of Wednesday's contest between the Chicago Cubs and Cleveland Indians ended in "strike 'em out, throw 'em out" fashion. Starter Zach Davies struck out shortstop Andres Gimenez for the second out of the bottom half of the fifth, and catcher Willson Contreras immediately fired to shortstop Javier Baez, who applied the tag on first baseman Jake Bauers for the third out of the half-inning.

Resulting in Contreras' third caught stealing of the season from behind the plate, the rocketed heave to Javy allowed "El Mago" to apply a smooth tag on Bauers as he slid headfirst into second base. Baez's no-look tag was made just in the nick of time, thwarting Bauers' steal attempt and giving the Cubs an inning-ending double play in the midst of a scoreless tie at Progressive Field.