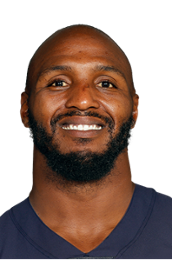 Outside Linebacker
B I O
PRO CAREER:

Played in all 16 games with 13 starts; inactive for Week 1; received his first start of the season in Week 4 vs. the Colts
Saw his first action in Week 2 vs. the NYG, recording a strip-sack on Daniel Jones on his first play; also added three total tackles and an additional forced fumble
Recorded a strip-sack on Kirk Cousins in the Week 15 win at Minnesota
Recovered a fumble in the Week 5 win vs. Tampa Bay
Season-high four tackles in Week 12 at Green Bay; had two tackles and two QBH in the re-match with the Packers in Week 17
Forced a fumble that led to an Eddie Jackson scoop-and-score touchdown in Week 7 at the Rams

Started 14 games for the Cowboys and wrapped up 11.5 sacks (for minus-86 yards) while adding a team-high 22 QBH and 13 TFL
Recorded his fourth season with double-digit sacks and his highest sack total since the 2013 campaign when he tallied a career-high 19.0
Recorded a team-high 22 QBH and 13 TFL
Recorded 2.0 sacks at New Orleans and again at the Jets
Generated pressure on 14.0 percent of pass rushes last season, second highest in the NFL behind Green Bay's Za'Darius Smith (14.6 percent), according to Next Gen Stats

In his lone season with the Dolphins, started all 16 games for the third time in his career and the first since 2014; tallied 38 tackles, 6.5 sacks, 15 pressures, four tackles-for-loss and two forced fumbles
Made his Dolphins debut against Tennessee with four tackles
Logged his first sack of the season at the N.Y. Jets
Had a season-high 1.5 sacks at Green Bay before posting four straight games with a sack Weeks 13-16

In his final season with the Rams, notched 34 tackles, 8.5 sacks, four tackles for loss, 12 hurries, one breakup and two forced fumbles, starting 14 of the 15 games he played
Had a sack in the opener against Indianapolis
Notched a season-high five tackles along with a sack against New Orleans to start a streak of four games with at least one sack
Notched 2.0 sacks in games at Arizona and at Seattle
Made his post season debut in the Rams Wild Card game against Atlanta and logged three tackles, a sack, one tackle for loss and a pressure

Was limited to starts in eight-of-nine games played after suffering a shoulder injury mid-season and a concussion near the end of the season
Tallied 10 tackles, 4.0 sacks, six hurries, two breakups and two forced fumbles
Had sacks in back-to-back games twice - Weeks 2-3 and 11-12
Missed the final five games with a concussion

Had 5.0 sacks, 21 tackles, seven hurries, three breakups, two tackles for loss and three forced fumbles in eight games (seven starts) before landing on Reserve/Injured (back) for the final three games of the season
Missed the final eight games with a combination of hip and back injuries
Opened the season with a pair of sacks against Seattle and logged sacks in games against Pittsburgh, at Green Bay and against San Francisco

Started all 16 games for the second consecutive season and notched 46 tackles, 10.5 sacks, 20 pressures, seven tackles for losses, six breakups and five forced fumbles
Opened the season with a tackle behind the line of scrimmage in five straight games
Had three straight weeks with six tackles (Weeks 6-8) and four straight games with at least one sack (Weeks 7-10), including a two-sack game at Kansas City
Had a season-high 3.0 sacks against Oakland, followed by 1.5 at Washington

Started all 16 games for the first time in his career and tallied 57 tackles, career-bests with 19.0 sacks - second in the league and a franchise record - 11 tackles for loss and 34 pressures
Tied his single-game high with 3.0 sacks in the opener against Arizona
Added another sack against San Francisco before notching 5.0 sacks in three games, including a three-sack day against Seattle; also had a career-best five pressures against the Seahawks
Had back-to-back games with sacks with 2.0 at Indianapolis and one against Chicago before closing the season out with sacks in the final three games - 2.0 against New Orleans, 3.0 against Tampa Bay and one at Seattle

In his second NFL season, played in all 16 games with 14 starts and notched 10.5 sacks and was second on the defense with 25 pressures along with 40 tackles
Teamed with Chris Long to become the first Rams defenders to record double-digit sack numbers since 2000
Had a single-game best with 3.0 sacks against Arizona
Notched his second career multi-sack game, finishing with 1.5 at San Francisco

Drafted in the first round (14th overall) by St. Louis and finished with 20 tackles and 5.0 sacks
Made his NFL debut at the N.Y. Giants and had his first career sack
Had sacks in consecutive games two times
Made his first NFL start - against Cincinnati and logged his third blocked punt of the season