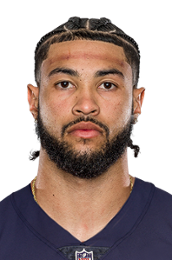 Saw action in three games; spent a majority of the season on the practice squad

Saw action in five games but did not record any stats