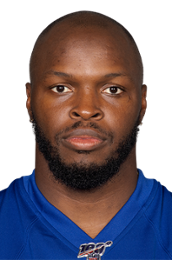 Played in two games with one start of the Jets, recording three TFL

Started in all 13 games he played in
Tied for second on the team with 80 total tackles (48 solo) and added 1.0 sack, one interception and six passes defensed

Started all 13 games in which he played at inside linebacker
Inactive with a hamstring injury vs. Washington (10/28) and with a concussion at Indianapolis (12/23) and vs. Dallas (12/30)
Finished second on the Giants with 93 tackles (58 solo), including 1.0 sack ... Led the Giants and all NFL linebackers with five interceptions. He tied the single-season record for interceptions by a Giants linebacker, set by Jerry Hillebrand in 1963
Returned two of the interceptions for touchdowns on a 15-yard return vs. Tampa Bay (11/18) and an 8-yard return vs. Bears (12/2). He was the only NFL player with two interception return touchdowns in 2018, and the first linebacker in Giants history to score twice on interception returns in a season
Collected seven tackles (3 solo) in his Giants debut vs. Jacksonville (9/9)
Intercepted his first pass of the season when he picked off Deshaun Watson at Houston (9/23)
Recorded a season-high 12 tackles (5 solo) vs. New Orleans (9/30)… Had nine (7 solo) and one interception vs. Tampa Bay
Tallied four tackles (2 solo), including an 8-yard sack of Carson Wentz, at Philadelphia (11/25)
Registered 10 tackles (5 solo) and two interceptions vs. Chicago. Ogletree was the two Giants linebacker with two picks in a game in 2018; B.J. Goodson did it at San Francisco (11/12)
Posted eight tackles (3 solo) and intercepted his fifth pass at Washington (12/9)

Appeared in 15 regular-season games and the Rams' postseason game at middle linebacker
He was one of several starters who did not play in the regular-season finale after the Rams had clinched the NFC West title
Finished the season with 95 tackles (63 solo), 2.0 sacks, one interception (that he returned 41 yards for a touchdown at Arizona on Dec. 3), 10 passes defensed, one forced fumble, and one fumble recovery
Tallied a season-high 12 tackles (11 solo) at Minnesota (11/19), and 11 stops (7 solo) vs. Washington (9/17)
Recorded sacks vs. Washington and vs. Seattle (10/8)
Had five solo tackles in Los Angeles' loss to Atlanta in an NFC Wild Card Game

Started all 16 games at middle linebacker after playing outside linebacker for his first three seasons
Voted a team captain by his peers
Led the team in tackles for third time in his career
Finished with the fifth highest single-season tackle output in Rams history with a career-high 171
Also led the team in passes defensed (16) and tied for the team lead in interceptions (2)
Notched a team-leading 16 tackles at San Francisco (9/12)
Totaled 11 total tackles (10 solo) and added a game-clinching forced fumble and fumble recovery in the final minute vs. Seattle (9/18)
Recorded 13 tackles (11 solo) and two passes defensed at New Orleans (11/27)
Tallied seven tackles (6 solo) and intercepted a Russell Wilson pass at the Rams' 1-yard line at Seattle (12/15)

Ogletree was limited to four games because of a broken fibula
Finished the season with 55 tackles and 2.0 sacks before being placed on injured reserve/designated to return on Oct. 26
Started at strongside linebacker and led the team with career-high totals of 18 tackles (15 solo) at Washington (9/20). It was the highest total by a Rams defender since London Fletcher had 21 tackles vs. San Francisco in 2001
Contributed 15 tackles (12 solo), including a career-high 2.0 sacks vs. Pittsburgh (9/27)
Led the team with 11 tackles at Arizona (10/4), despite leaving the game in the third quarter with a fibula injury

Started all 16 games and led the Rams in tackles for the second consecutive season with 169 (110 solo)
Finished second on the team in passes defensed (11) and forced fumbles (5)
Nabbed his first interception of the season and second of his career off Carson Palmer, returning it 44 yards at Arizona (11/9)
Followed that the following week with an interception of a Peyton Manning pass vs. Denver (11/16)
Registered 14 tackles (8 solo) at San Diego (11/23)
Made 13 tackles (11 solo) vs. the Giants (12/21)

Started all 16 games as a rookie and led the team in tackles with 155 (124 solo), and had 1.5 sacks, one interception returned 98 yards for a touchdown, seven passes defensed and six forced fumbles
Made his NFL debut with a start at strongside linebacker and registered a team-high 11 tackles (9 solo) and forced a fumble vs. Arizona (9/8)
Recorded a team-high 11 tackles, forced his third fumble of the season, and picked up his first career interception and touchdown when he grabbed a T.J. Yates pass and returned it 98 yards at Houston (10/13)
Ogletree tied the NFL record for longest interception return by a linebacker, and the longest return by a rookie linebacker in league history
Tallied a team-high 12 tackles (10 solo), including his first career sack by dropping Palmer for a 7-yard loss at Arizona (12/8)