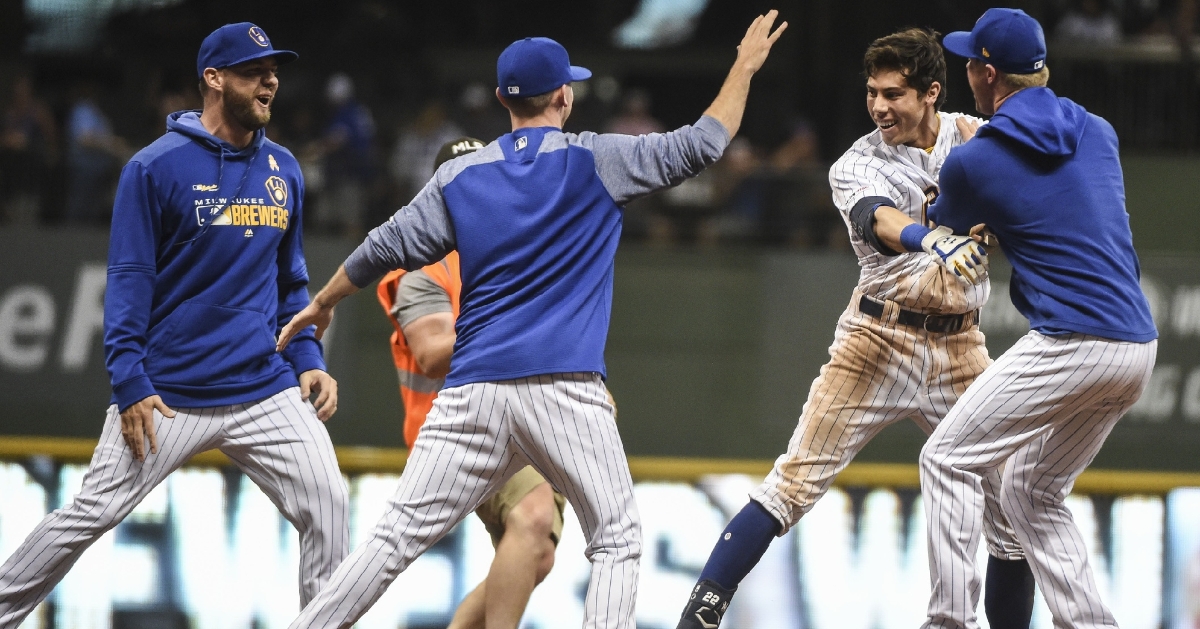 Christian Yelich plated the winning run via a walkoff double in the bottom of the ninth on Saturday. (Credit: Benny Sieu-USA TODAY Sports)

MILWAUKEE — Kyle Schwarber gave it his all when lunging toward a line drive hit into the left-field corner by Christian Yelich, but the lined shot was just out of his reach. Ricocheting off the wall and into left-center field, the RBI double plated the winning run and provided the Milwaukee Brewers (73-68) with a walkoff victory over the Chicago Cubs (76-65) on Saturday. Falling 3-2 at Miller Park, the Cubs never trailed until Yelich hit his game-winning double in the bottom of the ninth.

The Cubs were likely not playing with too much joy on the evening after finding out about Javier Baez's hairline fracture in his left thumb earlier in the day. Addison Russell started in place of Baez at shortstop, and he suffered an error in the final frame that essentially cost the Cubs a shot at extra innings. In the early innings, offense was hard to come by for both clubs, with double plays outnumbering critical hits. Chicago finally broke the scoreless tie when Russell went yard on a 404-foot solo home run hit out to center field in the top of the fifth.

On the mound, Yu Darvish fared well in his scoreless 5-inning start, giving up just three hits and one walk while striking out seven. Gio Gonzalez started on the bump for the Brewers, and he got taken for only two hits in his five innings of work, but one of them was the aforementioned Russell homer. Darvish pitched after being scratched from his previous start due to forearm tightness. Therefore, it was understandable that he threw only 72 pitches before being pulled.

Kyle Ryan replaced Darvish on the hill, and he issued back-to-back 2-out walks in the bottom of the sixth and then gave up an RBI single to Ben Gamel. The top of the eighth saw the Cubs load the bases with no outs, which led to known Cub killer Josh Hader coming out of the Brewers' bullpen. Hader was able to keep the Cubs relatively in check, but he did walk in a run to when Anthony Rizzo drew a base on balls with one out.

The Brewers wasted no time in tying the game at 2-2, as Yasmani Grandal took David Phelps deep on the first pitch of the bottom of the eighth. Three different relievers toed the rubber for the Cubs in the eighth, and the inning ended with Rowan Wick forcing Orlando Arcia into flying out with the bases juiced. After Hader sat the Cubs down in order in the top of the ninth, Russell kicked off the bottom of the ninth by making an errant throw to first base that took away from the excellent diving stop that he made to set up the throw. With two outs and Tyler Austin on first, Yelich sent a sinker thrown by Brandon Kintzler to deep left field for a walkoff 2-bagger that ushered Austin home and resulted in a 3-2 Brewers victory.