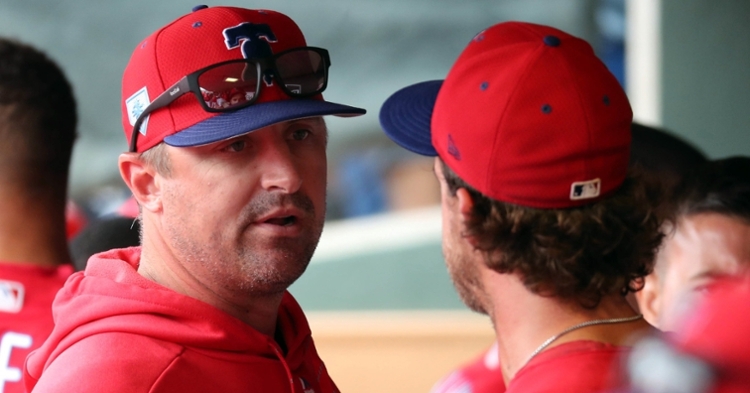 Young it is: Just a day after announcing that Lester Strode would no longer serve as the Cubs’ bullpen coach, multiple reports are out there that the Cubs have hired of former Phillies’ pitching coach, Chris Young as Strode’s replacement. Young is the first of what will be many hires for David Ross’ staff.

Denorfia to be replaced: The changing of the guard is underway at 1060 W. Addison. Yesterday it was Lester Strode, and today quality assurance coach Chris Denorfia got the boot. No word yet on his replacement, but it sure didn’t take long to get a new bullpen coach in place.

Borzello stays: one coach that isn’t going anywhere is assistant pitching/catching coach, Mike Borzello. Mike’s been with Chicago since 2011.

The Darvish roast continues Yu Darvish ran out of people to roast … so now he’s roasting himself. This gets better by the day!

Only 5 hits??
Do your job @faridyu

Hamels back to the Phils? There have been some rumors flying that Cole Hamels could wind up with the Phillies again. In a season-and-a-half, Hames did a great job for the Cubs, but because of his eligibility for a qualifying offer this year, Theo and the boys had to say goodbye to Hollywood.

“The Phillies need starting pitchers. Cole Hamels needs a job. A Phillies-Hamels reunion makes sense, especially because he is willing to take a one-year deal to play for a contender.” -Todd Zolecki, Phillies MLB beat writer

I think a Hamels/Phillies reunion could be just what it takes to fire Hamels up again, and I hope it happens. Hamels spent all but a couple of years with that team, and nothing could ever replace those memories. Best of luck, Cole; it was fun watching all you did for the Cubs.

What about that oblique injury that Hamels never seemed to recover from?

“I rushed back. When you have an oblique injury, you can’t do anything for 14-20 days. I didn’t throw. I just wasn’t able to build up the arm strength. I thought I’d be able to generate my pitches just by being out there. "I thought I could just make it work. Unfortunately, my arm got tired. I basically ran before I could walk. I was never able to catch up.” -Cole Hamels

Willson Contreras: Will was a finalist for this year’s Silver-Slugger, but Miami’s JT Realmuto ended up taking home the honors. Congrats to JT; best of luck next year, Willy.

Two years ago today, the baseball world lost Doc. Here's a photo of Halladay during spring with Toronto 10+ years ago.

Braves: The rumors have officially begun, and the Atlanta Braves are said to be prioritizing Madison Bumgarner. I can’t help but wonder if this news was intended as a distraction in order to draw interest away from Alex Anthropoulos’ statements from yesterday regarding what amounts to collusion among at least 28 MLB teams. For what it’s worth, Anthopoulos issued the following statement:

Yankees: The Yanks and OF Brett Gardner have already started discussing Gardner’s new contract, as the team tries to keep their longest-tenured player. The Yankees have also announced that they’ve hired Matt Blake to serve as their next pitching coach.

Ryan says goodbye: Presumably having to do with the fallout from the incident surrounding an Astros’ exec and a few female reporters a couple of weeks ago, Nolan Ryan is saying goodbye to the Astros – and it sounds like it’s for good.

Hall of Famer Nolan Ryan says in a text message he will not continue in his role as an executive advisor to the owner of the #Astros: “I will not be back with the club and will leave it at that.”

Tigers: “Demotion” is apparently the word of the day in Detroit. The Tigers announced yesterday that left-hander Nick Ramirez, right-handers Tim Adleman and Anthony Castro, outfielder Jose Azocar, and first baseman Frank Schwindel have all been re-signed to minor league contracts.