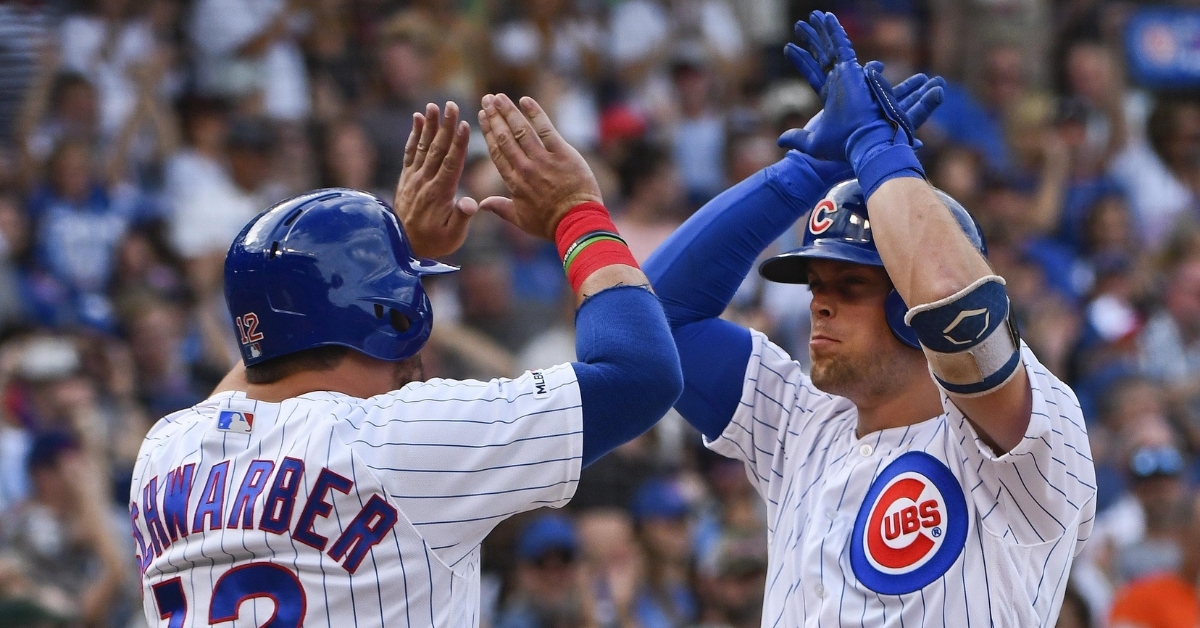 Even for those of us who expected it, it came as a shock when MLB canceled spring training. Those games were important for training and practice purposes but meant nothing otherwise. Now, however, we're cutting into the regular season.

The Cubs should be completing the first week of the season today, but instead, the only time anyone gets to see them is on social media or during the occasional interview. If you believe in PECOTA's prediction, Chicago would have won just 85 games this season, meaning that they should be somewhere around 3-2 as they entered play today for the last game of their home opener series against Pittsburgh.

Today would have marked six straight divisional games, as the Cubs opened the 2020 season. Before month's end, Chicago should have faced the Pirates another seven times and the defending NL Central champion Cardinals three times. With as bad as the Pirates have been for the last several years, it's not inconceivable that the Cubs could have had a healthy lead in the division as we headed into May, but now it's all for naught.

Instead of being able to look forward to a delayed starting date, every passing day seems to bring us closer to the possibility and reality that baseball may not be played at all this season. This isn't what the fans want, nor is it what players, teams, TV affiliates, or sponsors want. Baseball analyst Jim Bowden says that teams and owners want to play as many games as possible – however many that may mean.

How many games is realistic for the 2020 season? pic.twitter.com/1Ydluup3MG

Player pay: A player's salary is based upon the assumption that the season will consist of 162 games. Players are paid biweekly over the course of the six-month season, but when a season is shortened, that salary is prorated. Jon Lester should have made $25M this year, or $961,538.00 every two weeks from April through September. Lester's salary would equate to $154,320.00 for every game that the Cubs play, so you can figure that as of today, he'll have already lost about $926k of his salary in the first week of the season.

MLB is now paying Major League players a $1100/wk. salary, but that's pennies on the dollar for these guys.

Will COVID-19 affect trades? It's hard to believe that MLB would still have the trade deadline scheduled for July 31st, but they'll have to extend it until no later than the last day of the regular season, which could now be sometime in late October or early November.

Back in January, Theo Epstein said that if the Cubs had a "legitimate World Series contender," he wouldn't consider trades, but how will he know if the season is shortened by 80-100 games?

Epstein was loosely referring to trading from the Cubs' core when he made that statement, but it is evident that Kris Bryant the intended target. Bryant's loss in his service time grievance meant that he had this season and next before free agency, but a good majority bet that he'd be traded at the deadline or next winter at the latest.

It's clear that Bryant wants to remain in Chicago – if not, then he certainly puts on a good show – but starting in late June would mean that he only has a season-and-a-half left before free agency. The decision as to whether or not to trade Bryant won't be an easy one to make but rest assured, it'll have everything to do with Scott Boras' demands and Tom Ricketts' willingness to write what's going to be a very, very large check.

More importantly is the battle we're all facing with the coronavirus, which is sadly going to get worse before it gets better. The longer people resist isolating themselves from the public, the longer this thing is going to continue. Do us all a favor: Do your part to help flatten the curve.

Thank you to all the Dr’s, Nurses and Hospital workers! #cubs #StayAtHome pic.twitter.com/cxeI327PGv

Jason Kipnis: Via an Instagram post, Jason Kipnis aired his concerns about challenges that players will face when they return to action.

"Baseball post: First, quarantining in a cold-weather city like Chicago right now ain't exactly ideal. Every time I see anyone outside, I automatically think I'm falling behind (even tho no one is doing much baseball activity right now).

I'm fortunate to have my own batting cages if, for no other reason {than], it gets me out of the house and keeps my body from becoming stiff as aboard. My worries are that players who don't have warm weather or access to a place to [work out], are stuck without any way to 'keep up'.

Let's say things go well, and we can restart spring training. These players are expected to go from the couch to a 3-week spring and strap it on? That just screams injuries and sh**** baseball to me, to be honest. Not to mention if we start back up, and someone (asymptomatic or not) tests positive. Shut it down again?

I don't know how we're [supposed] to have that many tests provided! I really do hope things get better for everyone, and there's baseball this year, but these are just some of the worries creeping into my head that make me think otherwise."

Baseball post: First, quarantining in a cold weather city like Chicago right now ain’t exactly ideal. Every time I see anyone outside I automatically think I’m falling behind (even tho no one is doing much baseball activity right now). I’m fortunate to have my own batting cages, if for no other reason then it gets me out of the house and keeps my body from becoming stiff as a board. My worries are that players who don’t have warm weather or access to a place to workout, are stuck without any way to “keep up”. Let’s say things go well and we can restart spring training. These players are expected to go from the couch to a 3 week spring and strap it on? That just screams injuries and shitty baseball to me to be honest. Not to mention if we start back up, and someone (asymptomatic or not) tests positive. Shut it down again? I don’t know how we’re suppose to have that many tests provided! I really do hope things get better for everyone and there’s baseball this year but these are just some of the worries creeping into my head that make me think otherwise. Wouldn’t mind a little Q & A in the comment section or other good points if you got them! - keep in mind, this is a baseball post! I’m completely aware there are more important things going on and health of other humans takes priority over the season! Hopefully we can still talk about other things! Just wanted to create some dialogue to kill time!

The best rain delay ever! pic.twitter.com/7jGAVLocAG

Billy Williams, Anthony Rizzo and Kris Bryant give their perspective on the Cubs winning the World Series. pic.twitter.com/150wypPCOv

Andrew Miller was dominant in the 2016 postseason.

David Ross talks about homering off him and going on to win Game 7! pic.twitter.com/kuuggIShPB

#OTD in 2008, the #Cubs honored Ernie Banks with his own statue at Wrigley Field. pic.twitter.com/1eoEYl2yfy

Baseball Quotes: "Baseball was, is, and always will be the best game in the world to me." - Babe Ruth

I swing as hard as I can. I swing big, with everything I've got. I hit big or I miss big. I like to live as big as I can. -Babe Ruth