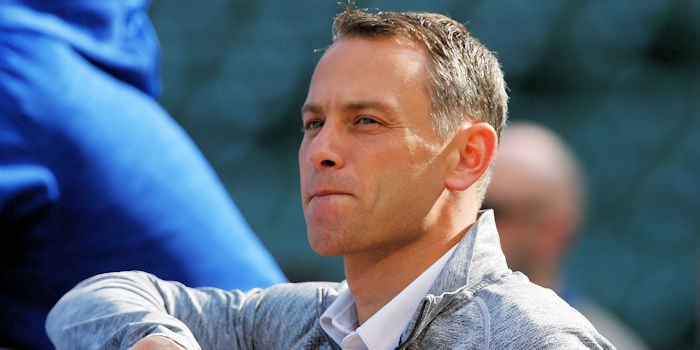 Before the signing players through free agency can start, the Cubs have one order of business they need to first take care of. That would be finding a new GM to replace Jed Hoyer, who has taken over for Theo Epstein as team President.

With a fresh new five-year contract in hand, Hoyer is now the man in charge as he opens this chapter of his life to leave a lasting imprint on this franchise. Sure, things will not be easy as he has tons of tough decisions that need to be made, but one thing is for sure. The Cubs are in great hands moving forward.

Immediately upon the news that Epstein was stepping down, it was a forgone conclusion that Hoyer would be taking over. That meant that the GM spot in the front office was going to be open. Although the Cubs have excellent options, such as Jason McCleod in hand, Hoyer does suggest that filling the general manager role could take longer than some would think if internal promotions were coming. That rings as he will be doing an outside the organization search to find his man.

No disrespect to anyone in the Cubs organization, but hiring someone outside the organization may be a great move. After all, this group has been together for nine years now. Many of them were with Epstein before coming to Chicago. They followed each other in terms of building an organization, so to have a different mind come in and do things his way would be a nice change of pace.

Hoyer has excellent options within this organization and hasn't officially ruled out the possibility of someone taking that spot. He did, however, speak positively about bringing in some outside perspectives during his press conference, so it will be curious to see what directions he has in mind.

“I think that that’s part of the beauty of going outside the organization,” Hoyer said Monday. “I kind of encourage that and I think, for me, the most important thing I’m going to be trying to find is a sense of trust. That’s probably part of the relationship with Theo that I value on top of everything else, is that these are high-pressure jobs and you make a lot of tough decisions, and things are going to go wrong. And I think you have to know that that person is with you 100 percent and that there’s no dividing the two of you.

“You guys have no idea which decisions I was in favor of or Theo was in favor of. And I think we made that a really concerted effort over the last nine years – that we were in this together and we would go forward together. And we wouldn’t talk about who was in favor of what or whose idea a trade was. To me, that’s critically important in these roles. I want all of the input I can possibly get, and I want differing opinions, but ultimately, when we go forward, we have to go forward as one.”

Jed Hoyer discusses what he’s looking for in the next @Cubs GM. pic.twitter.com/cg8xDJsiYs

With the Epstein departure timing coupled with the ongoing COVID pandemic, it only seems fitting that finding his right-hand man or woman will take time. Hoyer needs to evaluate everyone's qualifications within this organization and look at the rest of the MLB landscape and see who is willing to take on this Cubs job.

Much like the relationship Hoyer and Epstein built after working so many years together, it wouldn't come as a surprise to see someone come in that has a connection to him. If you at his Red Sox days, Amiel Sawdaye is a name that comes to mind, Josh Byrnes from when Hoyer was in the Padres organization. You also have Jared Porter, who was in the Cubs organization when Hoyer first came here before leaving to pursue other opportunities.

There is also a lot of talks about Hoyer looking hard at the Diamondbacks organization with hopes of getting one of their two assistant general managers to come to Chicago. Regardless of who he thinks may be a good fit, Hoyer will have plenty of options as the Cubs are a challenging job, but one anyone would love to take on.

Not only is Chicago a big market team, but they have an owner who is willing to spend money to make this team better. That may not have been the case the past few seasons, but historically the Ricketts family does what they need to do to put a winner on the field. You also have the historical side of things and what it means to build a winner in Chicago.

The world witnessed firsthand what a World Series championship means for the city of Chicago and this team's fans. Regardless of what happens to that group in the future, they will never be forgotten and will forever be a part of history. Coming to Chicago will allow an up and coming GM, successful GM, or any front office personnel member to join a historical organization and become a part of history.

The Cubs' general manager role might be the most critical role in professional sports given the offseason fans expect. There are tons of players hitting free agency next season and many under-performing stars who could be on the way out. Like it or not, this team needs a shakeup, and the decisions made now will impact their future.

Chicago has a lot of successful front office members who are ready for the task. Keeping things house is sometimes a bad idea as it allows the same viewpoints and voice to be locked in. Having someone outside the organization come in provides for a fresh face and a different voice to lead the way. Ideally, you want someone in place sooner rather than later when you look at the offseason upon us, but fans should be ok with Hoyer taking his time.

After all, he wants to make sure this is the right decision as it will be the first of the many choices he will be making this year. Don't expect a new GM to be hired in the next few weeks, as I expect the current front office to run the show for the rest of this year. Look for a new voice to be in charge sometime in January or early February, so things are ready to go for Spring Training.

Jed Hoyer: "Whoever my GM is, I'm going to make them sit at that podium and not get any questions asked of them. That's an important part of their humility. I can't tell you how many times Theo made fun of me after those press conferences for my potted plant impression."