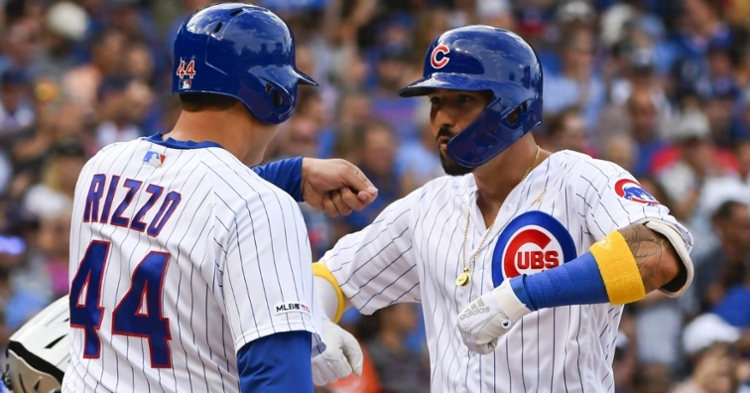 Nicholas Castellanos and Anthony Rizzo combined for seven RBI in helping lead the Cubs to an impressive win over the Pirates. (Credit: Matt Marton-USA TODAY Sports)

CHICAGO — To say that the Chicago Cubs (79-68) started off their last homestand of the season with a bang would be an understatement. Scoring a season-high 17 runs and becoming the first team in the majors to manufacture five or more runs in three separate innings this year, the Cubs homered five times in a shellacking of the Pittsburgh Pirates (65-83) on Friday. The Pirates actually went up 4-0 in the top of the first but were outscored 17-4 the rest of the way, with the Cubs opening the 3-game series at Wrigley Field, as well as their 10-game homestand, with a 17-8 victory.

If not for a pair of throwing errors committed by Cubs catcher Willson Contreras, the Pirates might not have experienced very much success at all on offense. A comedy of errors incited by a boneheaded Contreras throw allowed the Pirates to score the first run of the game in the opening frame. With a runner on first, Contreras unnecessarily threw to second in order to prevent a steal attempt after catching what proved to be ball four. The unnecessary throw sailed into center field, and Cubs center fielder Albert Almora Jr. made an even worse throw back into the infield, with the two errors enabling a run to come across.

What on earth #Cubs pic.twitter.com/B3Xq0p9Biv

Jon Lester started on the mound for the Cubs and was not exactly at his best, as he gave up seven runs on 11 hits and two walks in five innings pitched. With two outs in the first, Lester got taken for a 2-run triple by Pablo Reyes and an RBI double by Adam Frazier. Fortunately for Lester, Pirates starter Steven Brault was utterly woeful in his short-lived 10-run outing, which lasted 2 2/3 innings. Brault was taken for eight hits and three walks, and he wasted no time in allowing his club's lead to dissipate by giving up a trio of dingers in the bottom of the first.

Anthony Rizzo led off the bottom half of the first with a single, and Nicholas Castellanos then matched his career high for homers in a season by smacking a 2-run jack out to left field for his 26th long ball of the year. A few at-bats later, Contreras made up for his erroneous throw by hammering a 460-foot solo shot, which served as his career-best 22nd tater of the season. Kyle Schwarber doubled after that, and recent call-up Nico Hoerner followed that up by drilling his first career home run on the first pitch that he ever faced at the Friendly Confines. Hoerner's go-ahead 2-run dinger carried 411 feet out to center field and provided the Cubs with a 1-run lead.

Two more round-trippers were hit off Brault in the bottom of the third, including Contreras' second of the day. Sailing 455 feet out to the batter's eye, the towering leadoff shot from Contreras resulted in Contreras recording his third multi-homer game of the season. The Cubs went on to garner a walk, a single and another walk with two outs to load the bases, and Rizzo next lined a grand slam over the right-field wall, thus establishing a new franchise record. Including Rizzo's aforementioned grand slam, the Cubs have slugged 10 grand slams this season, which is the most in franchise history.

Brault exited once Rizzo went yard, but Lester remained in the game for a little while longer. The Buccos pushed two runs across when Contreras suffered another throwing error in the fifth, and an ensuing RBI single by Elias Diaz made the score 10-7 in favor of the North Siders. At that point, the contest seemed destined to continue as a back-and-forth slugfest, but the Cubs swung all of the momentum in their favor and gained total control by way of a 7-run fifth inning.

With the most impressive 2-out rally that they have put together all season, the Cubs scored all seven of their fifth-inning runs after the first two batters of the half-inning struck out. Back-to-back singles and a hit by pitch led to Hoerner becoming the first Cub since 1943 to amass eight RBI in his first five big-league contests by slapping a 2-run single up the middle. Soon afterward, when the bases were loaded, Jason Heyward entered as a pinch hitter and cranked a bases-clearing double that caromed off the wall in right-center.

Heyward's 3-run double put the Cubs ahead by eight runs, and an RBI base knock from Tony Kemp that scored Heyward and an RBI double from Castellanos that scored Kemp capped off the 2-out barrage. Castellanos collected his 50th double of 2019 by way of the RBI 2-bagger in the bottom of the fifth, thereby becoming the first outfielder since 2007 to hit at least 25 home runs and 50 doubles in a season. The fifth inning ended approximately three hours after the game began, but the final 3 1/2 frames progressed much quicker.

Flipping the script on the pitching theme, Cubs relievers Brad Wieck and Alec Mills both struck out the side in the sixth and seventh innings, respectively. Mills gave up the last run of the high-scoring affair when Kevin Newman scored Cole Tucker via an RBI single in the top of the eighth after Tucker tripled in the previous at-bat. In the top of the ninth, Mills sat the Pirates down in order for his first career save and wrapped up the Cubs' 17-8 triumph in the process. With 16 hits and 10 walks to show for it, the Cubs' offense fired on all cylinders on Friday, resulting in a much-needed awakening at the plate for the North Siders. Rizzo led the charge out of the leadoff spot by going 3-for-5 with two runs scored and four RBI.