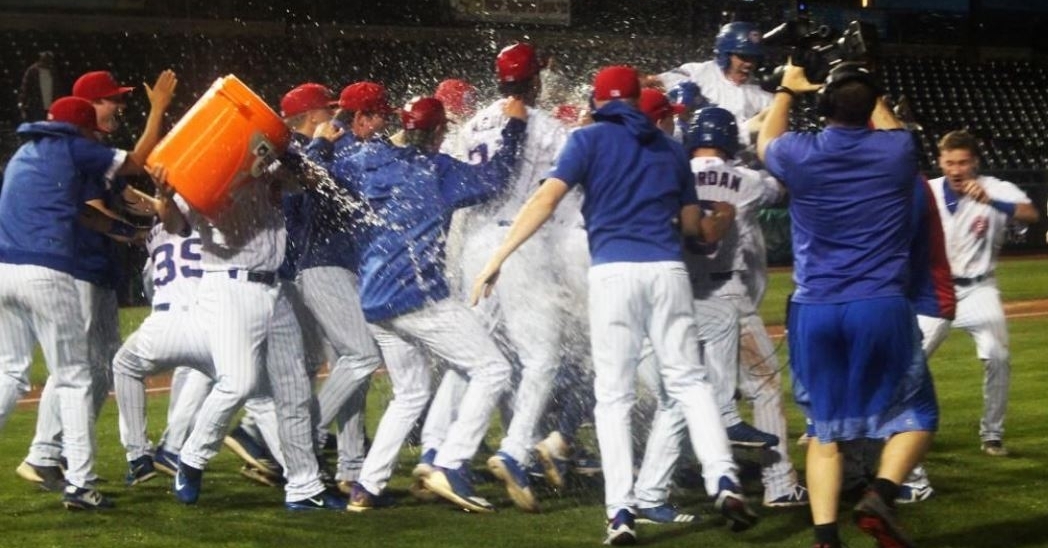 The beat goes on for South Bend as they seem to do no wrong so far, this post-season. Last night was another example of that as the Cubs played their final home game of the 2019 season. After opening an early 2-0 advantage and holding on until the ninth inning, Clinton was able to force extras before Mother Nature delayed things a bit more with a hefty downpour. That only delayed the result as the Cubs moved to 6-0 in postseason play with a 3-2 walk-off win to take a 2-0 lead in the series. One more win will give South Bend the title.

SOUTH BEND CUBS 3 – Clinton LumberKings 2 (10 innings): Looking to not only impress the home crowd one more time but to remain perfect in the postseason, the Cubs turned to Faustino Carrera on the hill looking to build off his Bowling Green outing. Carrera more than met the challenge of facing the LumberKings lineup as he held them to just one run in five innings of work to earn a no-decision before the offense had to rally late for the walk-off win.

Starting fast certainly has not been an issue for the Cubs this postseason, and that wasn’t going to change on Thursday night. With a fielding error followed by an Andy Weber double getting the bottom of the first started, the Cubs already had two runners in scoring position with nobody out. Looking to stay hot was Nelson Maldonado as he continued to carry his team offensively with an RBI single to put the Cubs up 2-0. Maldonado continues to have a fantastic postseason as he leads all players with 10 RBI’s.

After failing to bring home more runs in the first, South Bend was at it again in the second when another error followed by a Levi Jordan single had the first two runners on base with no outs. This time, however, Clinton was able to strand both of those runners preventing any further damage in the early going.

Bubba Hollins was able to put the LumberKings on the board in the top of the third as his RBI double cut the deficit in half at 2-1. That was the last of the offense for quite a while as once again pitching was solid on both sides. With both starting pitchers out of the game by the seventh inning, it was now a battle of the bullpens which is something the Cubs have excelled at throughout the postseason.

With Ivan Medina, Eugenio Palma, Fauris Guerrero getting the game to the seventh with the score still 2-1, it was up to Brendan King to secure the games final seven outs for South Bend. After getting the first four of those outs with relative ease, we shifted to the ninth inning when King had more than just the LumberKings to worry about.

Looking to lock down the final three outs for South Bend, Mother Nature had other plans as she opened the clouds to let out a furious rainstorm. With a pair of runners on base and down to their last out, Clinton knew it was now or never if they wanted to even the series up. Peyton Burdick managed to pick up what may be the biggest Clinton hit of the postseason so far as his single was able to tie things up 2-2 while moving into scoring position himself. King was able to keep things right there, but a wasted opportunity for South Bend in the bottom of the ninth not only sent the game to extras but forced teams to wait out a rain delay also.

The Cubs called on Blake Whitney to pitch the 10th, and he made short work of Clinton retiring them in order with a pair punchouts to bring South Bend back to the plate. The man of the series started the bottom half of the 10th off right as led things off with a single. With a sacrifice bunt moving him to second, Clinton elected to intentionally walk Cole Roederer to keep the double play ball intact.

Then, a momentum-changing play nearly altered the outcome of this game as Marcus Mastrobuoni singled up the middle only to see Maldonado gunned down at the dish keeping things tied 2-2 now with two outs. With runners on second and third, the Cubs benefitted from yet another lucky break as Peyton Culbertson bounced a breaking ball in the dirt that scooted past the catcher allowing Roederer to hustle home with the winning run lifting South Bend to the 3-2 Walk-off win.

Despite just three runs, the Cubs managed to tally nine hits but were out-hit again 11-9. Maldonado, Nelson Velazquez, and Jordan paced the Cubs offense in this one as they collected two hits each in the win. Roederer, Mastrobuoni, and Weber collected the teams other three hits as South Bend remains clutch in key situations. South Bend also dominated on the mound as their staff combined to walk just two hitters to go with 13 strikeouts.