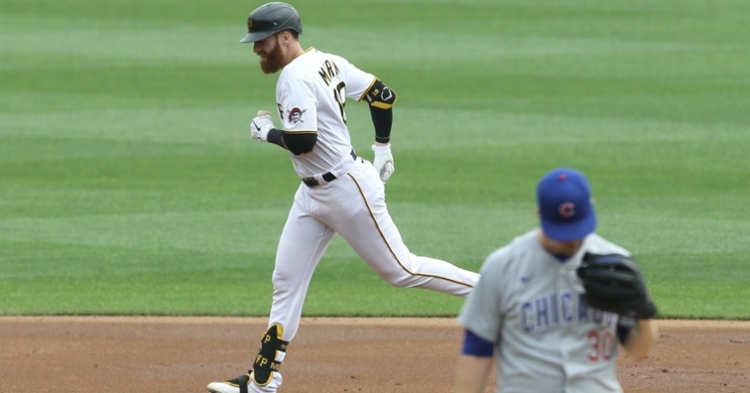 PITTSBURGH — Dropping their third straight to the Pittsburgh Pirates (18-39) on Thursday, the Chicago Cubs (32-25) were shut out in the finale of their four-game series at PNC Park. The Buccos won their final meeting of the year versus the Cubs by a final tally of 7-0 and took 3-of-4 in the series. The North Siders won the 10-game season series 6-4, though.

Chicago failed to accrue a hit until the sixth inning, with Pirates starter Chad Kukl outdoing Cubs starter Alec Mills on the mound. Pittsburgh took a 3-0 lead via three solo home runs and tacked on four more runs the rest of the way, finishing with four homers in all. The Cubs were outhit 14-2 by the Pirates on the afternoon and have now scored only 10 total runs in their last seven contests.

T1: Anthony Rizzo smacked a hard-hit liner directly to right fielder Gregory Polanco in the game's first at-bat. The line drive clocked in at a little under 115 mph and marked Rizzo's hardest hit ball of the season. Kuhl worked a 1-2-3 opening frame.

B1: With two outs, Mills gave up a solo jack to Colin Moran that carried 413 feet out to center and landed in the Pirates' bullpen.

T2: Two grounders and one popup made for an uneventful top of the second.

B2: Polanco led off with a single but was gunned down by catcher Victor Caratini on a steal attempt, with shortstop Javier Baez applying the tag at second base. Bryan Reynolds followed that with a 404-foot solo shot that carried over the center field wall. Rookie Jared Oliva reached on an infield single for his first major league hit and was able to take second on the play because of a throwing error committed by second baseman Jason Kipnis. Oliva was left stranded, however.

T3: The Cubs went down in order their third time up.

B3: Adam Frazier led off the bottom of the third and, not long after crushing a foul ball out of the stadium, skied a 397-foot round-tripper into the right field bleachers.

T4: Chicago drew a pair of walks and later sported runners on second and third when Cameron Maybin hit an inning-ending lineout.

B4: Reynolds led off with a base knock, and Oliva then collected an infield single. Oliva suffered a bad break on the next play, when a rocket off the bat of J.T. Riddle grazed Oliva's pant leg on its way to right field. Oliva was called out after initially reaching third, and Reynolds, who initially scored, was placed back at second. Riddle was credited with a single and granted first base. A groundout advanced both runners, and, following a pitching change, Kyle Ryan gave up a single to Frazier that scored Reynolds. Riddle attempted to score, too, but Kyle Schwarber threw him out from left, thereby ending the fourth frame.

T5: Kuhl struck the side out swinging in a 12-pitch half-inning.

B5: Moran's base hit off Ryan was followed by a two-run blast, which traveled 384 feet to left, from Josh Bell.

T6: Rizzo hit a one-out double off the top of the wall in right for the Cubs' first hit of the game. Willson Contreras walked after that, but the Cubs failed to score.

B6: Duane Underwood Jr. pitched a three up, three down sixth that included two strikeouts.

T7: Like Rizzo, Kipnis swatted a one-out double off the wall in right. Baez was subsequently hit by a pitch that got away from Kuhl and was not pleased. Baez expressed his frustration with the beaning, and both benches were warned once "Javy" headed to first base. Caratini then lined into a double play, with Kipnis getting doubled off at second.

B7: A single by Ke'Bryan Hayes, a double by Moran and an intentional walk of Bell loaded the bases with one out. Polanco hit a sacrifice fly that plated Hayes, and Reynolds reached on an infield single that saw Underwood make an awkward jump throw to first that did not pay off. Underwood fanned Oliva to escape the inning.

Cubs out here shooting fadeaway jumpers in the infield. pic.twitter.com/xTmOmUWCZ4

T8: Geoff Hartlieb pitched the top of the eighth and tallied three straight outs, one of which was another liner to right off the bat of Rizzo.

B8: Jason Adam kept the Bucs off the bases in the bottom of the eighth.

T9: The Cubs were sat down in order to end the game. Blake Cederlind toed the rubber in the ninth and, after throwing some chin music that was likely unintentional, forced Maybin to hit a popup that resulted in the final out. Maybin slammed his bat down in frustration after popping up, thus epitomizing the Cubs' vexations regarding their recent offensive woes.

The shutout progressed rather quickly, with the game ending approximately two hours and 40 minutes after it began. Mills drew the loss, making him 5-5 on the season, and Kuhl moved to 2-3 overall by way of the win. In the wake of their losing performance, the Cubs saw their lead in the National League Central drop to three games.

Up Next: The Cubs' final series of the regular season will constitute the second half of the 2020 Crosstown Classic, as the North Siders will head to the South Side of Chicago for three games against the rival Chicago White Sox (34-23). The White Sox took 2-of-3 from the Cubs at Wrigley Field earlier in the season. Friday, Sept. 25, will feature a right-handed pitching matchup, with Yu Darvish (7-3, 2.22) of the Cubs and Dylan Cease (5-3, 3.52) of the White Sox slated to start on the mound at Guaranteed Rate Field. The opening pitch is scheduled for 7:10 p.m. CDT, and the forecast calls for an overcast night with mild temperatures and a light breeze at the ballpark.