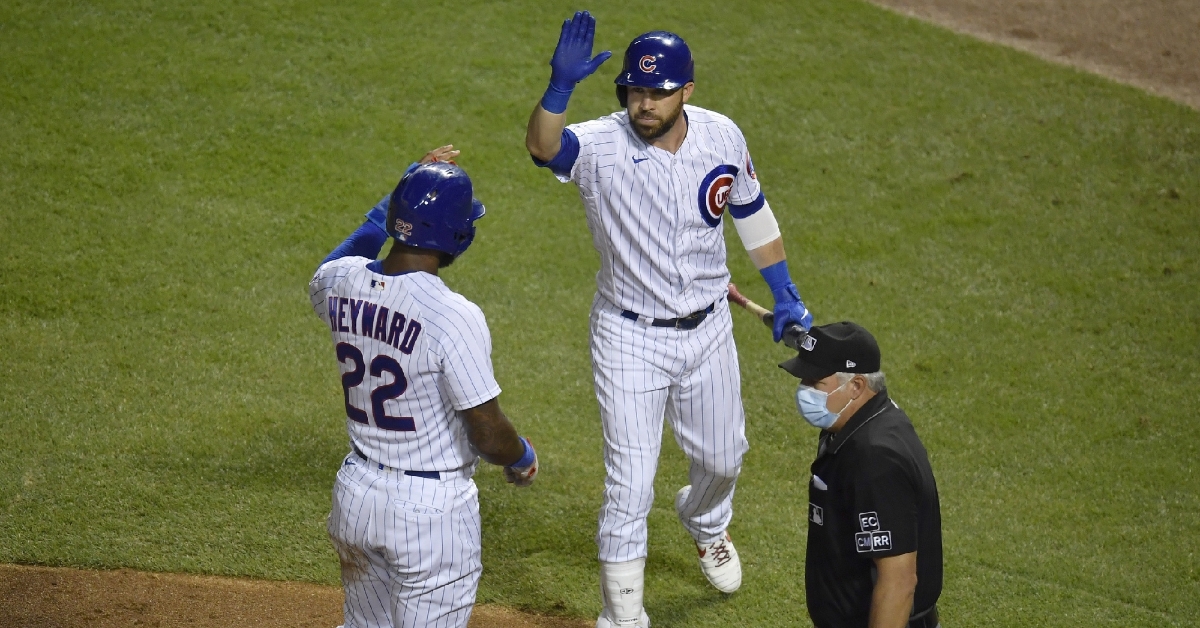 The Cubs must win on Sunday if they are to avoid suffering their first sweep of the season. (Credit: Quinn Harris-USA TODAY Sports)

CHICAGO — After going yard six times in the series opener, the Chicago White Sox (17-11) continued to dominate Chicago Cubs (16-10) pitching in game two. The South Siders hammered five home runs, including three off the bat of Jose Abreu, and won 7-4 at Wrigley Field.

Cubs starter Kyle Hendricks gave up two of the five dingers during the course of his 5 1/3 innings pitched. The North Siders were unable to replicate the power of their crosstown rivals on Saturday, with the Cubbies recording two extra-base hits as opposed to the eight registered by the White Sox.

T1: Despite David Bote displaying great effort in preventing a worm burner hit by Tim Anderson from leaving the infield, the lightning-quick Anderson reached base for an infield single in the first plate appearance of the game. Hendricks struck out the next two batters before Abreu smacked a single that put runners on the corners. Former Cubs propsect Eloy Jimenez fouled out to end the half-inning.

B1: Reynaldo Lopez started on the bump for the White Sox, and he worked a scoreless first after walking the leadoff man, Ian Happ.

T2: Edwin Encarnacion led off with a double, and Luis Robert then went yard with a 422-footer hit out to center. Anderson tallied another infield single later in the frame but was left stranded.

B2: Lopez was shaky at the start of the bottom half of the second, hitting Willson Contreras with a pitch and walking Jason Heyward. Victor Caratini plowed a two-run double off Lopez, sending a changeup into the well in left field. The two-bagger caromed off the wall, and Contreras and Heyward scored with ease to even the score.

T3: Abreu drew a walk with one out, which was followed by a fielder's choice that outed Abreu at second. Encarnacion grounded out in the ensuing at-bat, but an off-mark throw from Javier Baez at shortstop nearly resulted in Encarnacion reaching base. Anthony Rizzo was able to swipe Encarnacion with his mitt after being pulled off the bag in order to catch Baez's throw. Encarnacion then narrowly avoided colliding with the first base umpire, who fell down while attempting to dodge the designated hitter.

B3: Cubs batters were sat down in order in the third.

T4: A one-out single by Nomar Mazara was followed by a 5-4-3 double play made possible by a ground ball hit by Danny Mendick.

B4: Following a pitching change, Jason Heyward drew a base on balls but was left on base.

B5: Ian Happ singled, and Rizzo grounded into a 4-6-3 double play to end the inning.

T6: With his first homer of the evening and third homer of the series, Abreu smoked a leadoff blast to right in the top of the sixth. Hendricks departed soon afterward.

B6: Baez's leadoff walk was spoiled by the 5-6-3 double play that Kyle Schwarber hit into.

T7: The Cubs turned a double play of their own in the top of the seventh. After Ryan Tepera walked two batters to start the inning, Anderson hit a ground ball that resulted in a 6-4-3 double play.

B7: Jason Kipnis drew a two-out walk. Other than that, it was nothing doing for the Cubs in the bottom of the seventh.

T8: Abreu powered out his second home run of the contest after Yasmani Grandal was walked to begin the eighth. Rowan Wick gave up the two-run jack and then issued a double to Jimenez. Casey Sadler relieved Wick with one out and prevented the South Siders from tacking on any more runs.

B8: The North Siders were able to tab a run off reliever Evan Marshall. Baez and Schwarber hit back-to-back two-out singles, and Contreras scored "Javy" with a base knock to center. Heyward flied to usher in the ninth.

T9: Duane Underwood Jr. toed the rubber and did not fare well after striking out the first two batters he faced. Grandal went deep off Underwood, and Abreu secured the first three-homer performance of his career with an ensuing solo shot that capped off his perfect 4-for-4 plate performance. Jimenez doubled thereafter, but Encarnacion struck out four pitches later.

Wanna see us crush a baseball into the bleachers?

Wanna see us do it again? pic.twitter.com/TueEdEQcuI

B9: Closer Alex Colome finished the Cubs off. Colome struggled at first, walking Nico Hoerner and giving up a double to Kipnis. However, he fanned Bote and drew a groundout and a lineout in the next three at-bats. Happ's groundout scored Hoerner from third, but Rizzo hit a line drive right to Robert in center field to end the game.

Veteran hurler Gio Gonzalez, who pitched out the bullpen for the White Sox, earned the win to move to 1-1. Hendricks dropped to 3-3 with the loss, and Marshall garnered his sixth hold.

Up Next: In order to avoid suffering their first sweep the season, the Cubs need win the series finale against the White Sox on Sunday, Aug. 23. There is a chance of thunderstorms on the afternoon, but, as for now, the start time at the Friendly Confines is scheduled for 1:20 p.m. CDT. Right-handers Yu Darvish (4-1, 1.80) of the Cubs and former Cubs prospect Dylan Cease (4-1, 3.16) of the White Sox are slated to pitch.

The #Cubs drop the first two games of the series to the White Sox.