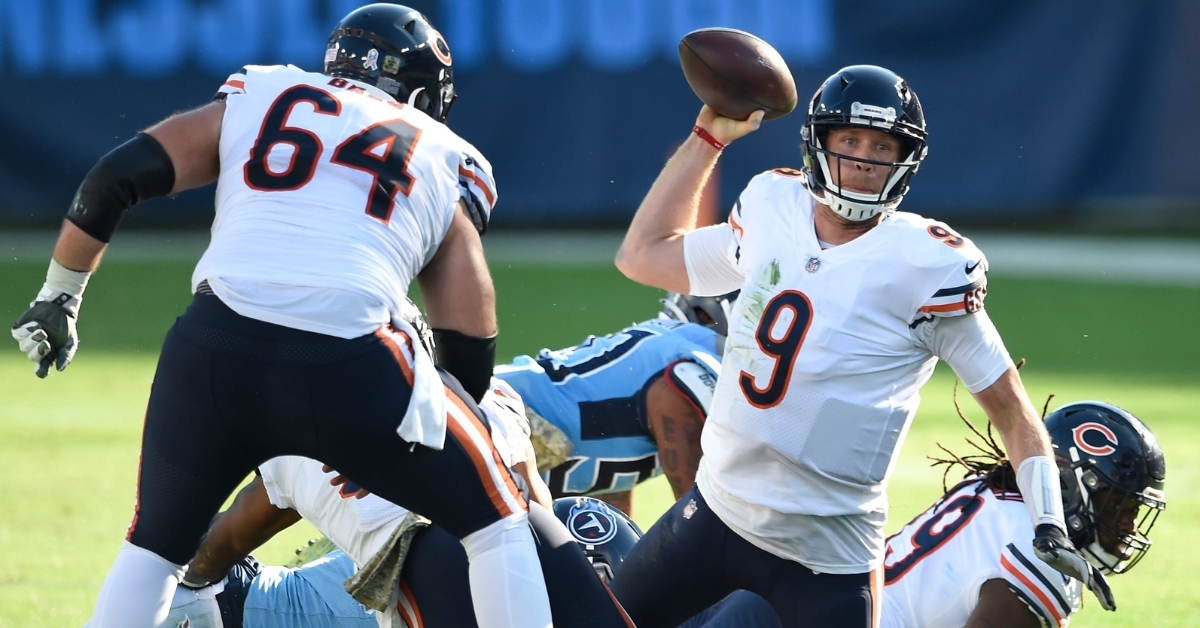 NASHVILLE, Tenn. — In a Week 9 contest with a final score not exactly indicative of how the game played out, the Chicago Bears (5-4) lost 24-17 to the Tennessee Titans (6-2). The Bears scored both of their touchdowns with under six minutes remaining in the game and did not score at all prior to the fourth quarter on Sunday.

A costly Chicago fumble and a lack of offensive production by the Bears through three quarters of play culminated in the Titans going up 17-0. The Bears' offense finally clicked after Tennessee took a 24-3 lead at Nissan Stadium, but it was a case of too little, too late. Tennessee snapped a two-game losing streak by way of the victory, while the Bears' losing skid extended to three games.

Titans, punt: The Titans went three-and-out to open the game. Ryan Tannehill was nearly picked off by Kyle Fuller on third down.

Bears, turnover on downs: The Bears' first drive ended as a turnover on downs in Titans territory. Foles and Jimmy Graham teamed up for a 24-yard pass after a play fake. On fourth-and-1 at the Tennessee 34-yard line, David Montgomery was stuffed at the line of scrimmage.

Bears, punt: Cordarrelle Patterson caught a five-yard pass and produced a two-yard run. Then, a Foles incompletion led to a punt.

Titans, field goal: Brown hauled in a pass over the middle, broke a tackle and cut across the field for a gain of 38 yards. Soon afterward, Anthony Firkser dropped a third-down pass that would have moved the chains if caught, and Stephen Gostkowski made a 40-yard field goal.

Titans, punt: Mario Edwards Jr. sacked Tannehill for a loss of six. Ryan Allen pinned the Bears deep but was forced to punt again due to a Titans penalty. He then came through with a 60-yard punt, and the Bears took over at their own 20.

Bears, punt: A short scramble by Foles was followed by a pair of incompletions.

Titans, punt: Roquan Smith sacked Tannehill for a loss on eight on third down.

Bears, punt: A fake punt panned out for the Bears. Montgomery received a direct snap and handed it off to Barkevious Mingo, who ran for 11 yards on fourth-and-6. On third-and-2, Montgomery failed to pick up any yardage on a rush up the gut.

Titans, touchdown: The Titans started the drive at their own 9-yard line, but Derrick Henry provided them with some breathing room in the rushing department. Brown picked up 17 yards on a pass over the middle. Firkser came through with a nine-yard reception on third-and-7. A few plays later, Tannehill threw a perfect deep ball to Brown, who was able to haul it in, despite being closely guarded. After making the catch, a diving Brown reached the football out over the goal line, resulting in a 40-yard touchdown.

Bears, punt: Graham picked up 14 yards with a catch and run on the first play of the possession. Foles was sacked for a loss of six after that, and the Bears wound up punting.

Titans, punt: Bilal Nichols wrapped up Tannehill for a sack at the 2-yard line. Forward progress prevented a safety from coming to fruition on the play. The Bears used their two remaining timeouts to set up a potential scoring drive before halftime. Dwayne Harris returned the punt 19 yards to the Titans' 48.

Bears, end of half: The Bears squandered their great field position by committing two penalties to start the drive. An incomplete pass from midfield marked the final play of the first half.

Bears, punt: A botched play resulted in a fumble recovered by the Bears for a three-yard loss on the first play from scrimmage out of the intermission. Foles then made up for it by connecting with Miller for a 34-yard pickup. Shortly thereafter, the Bears faced fourth-and-inches at the Tennessee 31, and a false start backed them up. With the offense remaining on the field, another false start then brought the punt unit out.

Titans, punt: Henry picked up a first down on the ground, but the Titans punted not long after that.

Bears, fumble return touchdown: The Bears' first efficient drive of the game ended in a turnover. Foles completed three straight passes, including a 22-yarder to Darnell Mooney, to begin the possession. Fresh off being sacked, Foles completed an 18-yard pass to Riley Ridley to convert on third-and-16. Following an intentional grounding call, a sack was waved off due to the Titans being offside. On third-and-13, Foles dumped off a pass to Montgomery, who proceeded to fumble. Desmond King II, who was acquired by the Titans earlier in the week, scooped up the loose ball and returned it 63 yards for a touchdown.

Landry with the answer! @HaroldLandry

Bears, field goal: Allen Robinson hauled in a 23-yard reception. Facing fourth-and-1 at the Tennessee 32, the Bears opted to go for it, and Montgomery kept the drive alive with a five-yard carry. The Bears reached the 4-yard line but could not punch it into the end zone. Foles was sacked for a loss of one on first-and-goal, and, on third-and-goal, he was nearly picked off on a tipped pass. Cairo Santos got Chicago on the scoreboard with a 22-yard field goal.

Titans, touchdown: Tennessee answered with a touchdown drive of its own. Henry broke free for a 26-yard carry that placed the Titans at midfield. Later, Jonnu Smith found plenty of room to run after making a catch and gained 30 yards. On the very next play, Tannehill found Smith wide open in the end zone for a two-yard score.

Bears, touchdown: Robinson pulled off an impressive leaping grab near the sideline for a gain of 27. Montgomery then caught a pass and collected 13 yards. He left the game with concussion-like symptoms later in the drive and did not return. A 12-yard reception by Miller was accompanied by a Titans face mask that moved the ball to the 6-yard line. Ryan Nall, who replaced Montgomery in the backfield, caught a short pass and scurried into the end zone for a six-yard score with 5:06 remaining. The touchdown was the first of Nall's career.

Titans, punt: The Bears' defense stepped up and forced a quick three-and-out.

Bears, fumble: After taking over at their own 39, the Bears immediately coughed up the football. Miller caught a short pass and, after making a cut, had the ball punched out. Jeffery Simmons, who played very well on the afternoon, recovered the fumble.

Titans, punt: Following the turnover, the Titans were unable to pick up a first down.

Bears, touchdown: Nall tallied 16 yards on a pass play that ushered in the two-minute warning. The Titans were penalized for roughing the passer and unnecessary roughness during the course of the drive, and Nall gained 12 yards on a screen pass. An 11-yard pass from Foles to Robinson set up an eight-yard touchdown pass from Foles to Jimmy Graham.

Titans, end of game: The Titans easily recovered the onside kick and then ran out the clock.

Up Next: In Week 10, the Bears will play on "Monday Night Football" for the second and final time this season. The Minnesota Vikings (3-5), who have won two consecutive games, will head to Soldier Field for the first meeting of the year between the NFC North foes. On the night of Monday, Nov. 16, the weather in Chicago is expected to be cold, partly cloudy and somewhat windy. The Vikings lead the all-time series against the Bears 60-56-2, but the Bears defeated the Vikings 21-19 when they last met to close out the 2019 regular season.