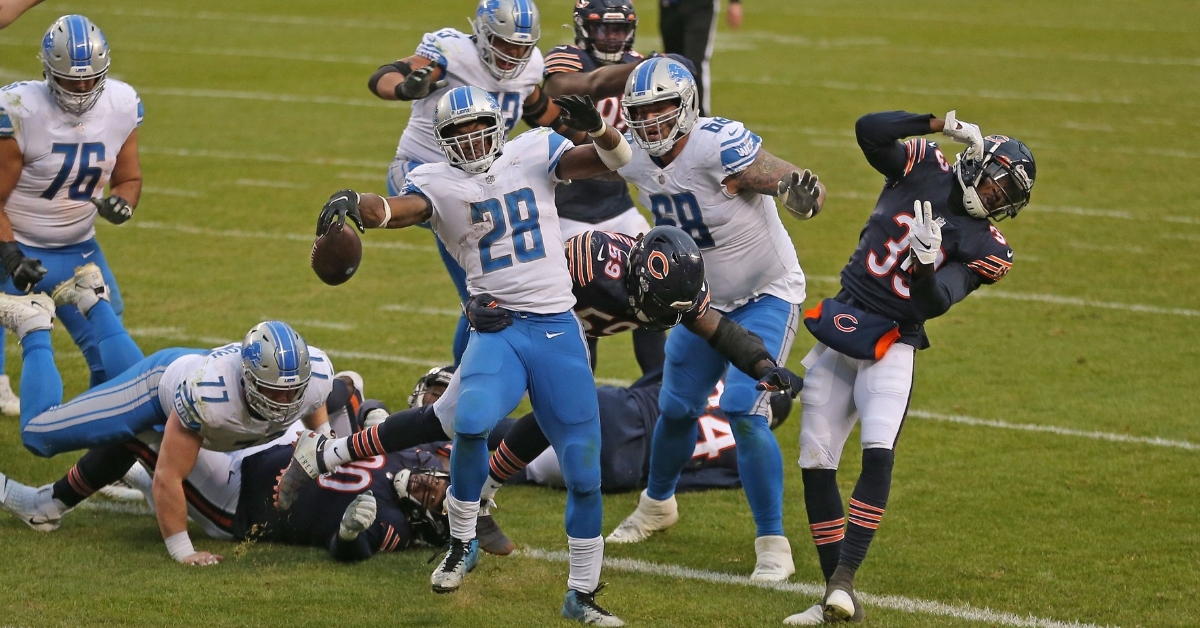 CHICAGO — In Week 1 of the 2020 NFL season, the Detroit Lions (5-7) collapsed at home and allowed the visiting Chicago Bears (5-7) to storm from behind in the fourth quarter and come away with a win. The tables turned in Week 13, with the Bears suffering a fourth-quarter letdown and losing at home to the Lions. Despite the Bears stringing together a much-improved offensive performance in the wake of their recent woeful showings on offense, Detroit came out on top.

The Lions scored two touchdowns in the final 2:18 of the game and pulled out a 34-30 victory at Soldier Field, thereby extending the Bears' losing streak to six games. Not long after the Lions pulled within four points of the Bears, Chicago quarterback Mitchell Trubisky coughed up the football as part of a strip sack. That resulted in a turnover, which culminated in a go-ahead score for the Lions. The Bears responded with a respectable drive, but they hit a wall and suffered a game-ending turnover on downs at Detroit's 20-yard line.

Bears, field goal: The Bears' offense started off with great field position after Cordarrelle Patterson returned the opening kickoff 45 yards to the Chicago 46. Trubisky completed a 16-yard pass to Allen Robinson, and David Montgomery picked up eight yards on the ground. Chicago ended up settling for a field goal, with Cairo Santos connecting on a 45-yarder.

Lions, turnover on downs: Matthew Stafford completed a pair of passes to Mohamed Sanu Sr. and Jamal Agnew that resulted in gains of 21 yards and 19 yards, respectively. The Lions went for it on fourth down from the Bears' 29, and Agnew was stuffed at the line of scrimmage by Buster Skrine.

Bears, touchdown: Following the turnover on downs, the Bears produced an efficient drive. Robinson hauled in a 17-yard pass, and Patterson picked up 12 yards on a rush. Patterson continued to make a mark with a 13-yard run, and Montgomery proceeded to run for eight yards after receiving a direct snap. Montgomery received a handoff on the next snap, and he stiff-armed a defender en route to powering his way into the end zone for a 13-yard touchdown. The point after attempt was blocked, marking Santos' first missed extra point of the season.

Lions, touchdown: The Lions answered with a touchdown drive of their own. Stafford completed a 15-yard pass to Marvin Jones Jr. and a 14-yard pass to Quintez Cephus. Adrian Peterson broke off a 15-yard run, and T.J. Hockenson tabbed a 14-yard reception. Peterson capped off the possession with a three-yard touchdown run, and Matt Prater missed the extra point after his first attempt, which was good, was waved off due to offsetting penalties. Prater's second attempt caromed off the right upright.

Bears, touchdown: Trubisky completed a pass over the middle to Robinson for a gain of 21. Darnell Mooney collected a 10-yard reception soon afterward. Javon Wims gained 13 yards on a pass play that moved the Bears into the red zone. A 10-yard run by Montgomery set up first-and-goal, and Patterson sprinted outside the tackle box and up the sideline for a five-yard touchdown carry.

.@ceeflashpee84 does it ALL!
RT to #ProBowlVote ?!

Lions, punt: Khalil Mack sacked Stafford, but it was nullified by illegal contact getting called on Skrine. The Lions punted after stalling out on the next set of downs.

Bears, punt: After taking over at their own 12, the Bears quickly picked up two first downs before coming to a halt and having to punt.

Lions, touchdown: What had all of the makings of a promising defensive stand for the Bears quickly unraveled. On third-and-12 at the Lions' 26, Jones caught a 25-yard pass from Stafford. On the very next play, Cephus broke free in the secondary, and Stafford completed a deep ball to him for a 49-yard touchdown.

Bears, touchdown: The Bears regained their double-digit lead in a hurry. A 10-yard reception by Robinson and a 15-yard reception by Miller advanced the ball into Lions territory. Miller picked up 19 yards on a pass play that placed the Bears in the red zone. Following a nine-yard Miller reception, Montgomery shed a few tackles and reached across the goal line for a four-yard rushing score.

Lions, end of half: Detroit reached the Chicago 47 but opted against sending Prater and his big leg onto the field to try a field goal of over 60 yards. Instead, Stafford threw two deep passes that both fell incomplete, with the second one running out the clock.

Lions, punt: Sanu caught a 15-yard pass to move the chains. The next set of downs ended with Bilal Nichols sacking Stafford on third-and-5.

Bears, punt: Cole Kmet snagged a 13-yard reception. A false start hindered the Bears, and the possession ended with a punt.

Lions, touchdown: Stafford began the drive with two completions to Jones. Hockenson made a couple of catches during the possession, including a 24-yarder. Jesse James made an athletic catch in the left side of the end zone for a nine-yard score.

Bears, touchdown: J.P. Holtz returned the kickoff and was injured on the play, suffering a shoulder injury that kept him out of the remainder of the game. Patterson reeled off a 13-yard run, and, on the next set of downs, Trubisky converted on third-and-short via a keeper. Early in the fourth quarter, Mooney picked up 21 yards with a reception, and, on a third-down play, Patterson lunged for a first down to keep the drive alive. Fully extending his arm toward the line to gain, Patterson moved the sticks on a four-yard receiving play. A few snaps later, Kmet caught a short pass and barreled into the end zone, with his momentum carrying him into a tunnel beyond the field of play. The 11-yard touchdown reception marked the Bears' final scoring play of the day.

Lions, interception: Under duress, Stafford forced a risky pass that Nichols picked off and returned to the Detroit 46. Not long before that, Stafford and Danny Amendola linked up for a gain of 23.

BIG MAN INT!!@BNichols98 gets his paws on one.

Bears, punt: A holding call moved the Bears back on a run play that would have otherwise resulted in a first down. The Bears wound up punting from near midfield.

Lions, touchdown: Following a 14-yard pass to Hockenson, Stafford completed two consecutive lengthy passes to Amendola. Hockenson went on to gain 13 yards on a catch that set up a 25-yard touchdown reception by Jones.

Bears, fumble: With Prater doing an excellent job of avoiding kicking to Patterson, Mooney produced a short kickoff return, and the Bears took over at the 11. After Detroit used its first timeout at the 1:54 mark, Trubisky had the ball jarred from his grasp by Romeo Okwara. The fumble was recovered by John Penisini at the 7.

Lions, touchdown: A two-yard carry by Peterson set up a five-yard touchdown run by Peterson, who bulldozed his way through defenders and into the end zone.

Bears, turnover on downs: After the Lions took the lead for the first time in the contest, the Bears began their final offensive drive at their own 25 with 1:37 remaining. Montgomery racked up 16 yards on a short pass play, and a horse collar tackle tacked on 15 yards, moving Chicago into plus territory. A few plays later, Montgomery tallied a 14-yard reception. Eventually, the Bears faced fourth-and-1 at the Lions' 20, and Montgomery was unable to pick up the much-needed yard on a carry that resulted in no gain. The ruling was upheld following a replay review, and the blocked extra point from the first quarter proved very costly in the end.

Lions, end of game: Stafford kneeled, giving interim head coach Darrell Bevell a win in his first game at the helm. Matt Patricia, the previous head coach, was fired by the Lions following their Week 12 loss. As for the Bears, they have now lost six straight games in a season for the first time since 2002.

Up Next: In Week 14, the Bears will look to get off the schneid when they host the Houston Texans (4-8) at Soldier Field on Sunday, Dec. 13. The Bears have never beaten the Texans, with Houston leading the all-time series 4-0 and having defeated the Bears 23-14 when the teams last met in 2016. Chicago assuredly hopes that winless streak ends on what should be a cloudy, cold, windy afternoon in Chi-Town. The opening kickoff is scheduled for noon CST.