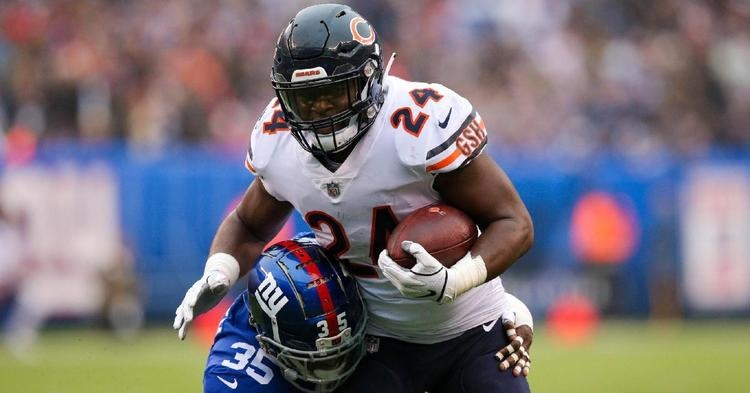 For the first time since 2010, the Chicago Bears have lofty expectations. After a 12-4 season backed by the highest-scoring defense in the league, the Bears are looking for the offense to improve from a mediocre season. The key to their improvement may not be through their hopeful franchise quarterback; rather the key may be in the rushing game.

Last season, the Bears finished 11th in rushing yards with 1938 yards and tied for seventh in rushing touchdowns with 16. While getting yards on the ground seemed not to be a problem for the Bears, their effectiveness held them back. The Bears finished tied for the sixth-most rushing attempts despite having the seventh efficiency at 4.1 yards per rushing attempt (Y/A). The Bears also lost four fumbles, tying them for the sixth-most in the league.

Of the starting running backs, no one was criticized more than Jordan Howard. The former Pro Bowler had his worst professional season in his young career. Through his first two seasons, Howard averaged 1218 rushing yards with 4.7 Y/A. These numbers plummeted to a still respectable 935 yards, finishing 11th in the league, and a not so alright 3.7 Y/A, finishing 39th in the league. Despite a strong finish to the season, the Bears traded Howard to the Eagles, leaving the running game to the exciting Tarik Cohen and two new faces.

Cohen will likely see similar production as he did last year. While he may not be a bell-cow running back, Cohen’s 1169 scrimmage yards and eight total touchdowns led the Bears. Hid versatility and explosiveness make him an essential part of the offense, but most of his value comes as a receiver. As for the Bears looking to take the most carries, third-round pick David Montgomery and veteran Mike Davis are the frontrunners.

Montgomery is an exciting rookie who has already impressed in his limited preseason thus far. In three rushing attempts, Montgomery gained 16 yards (5.3 Y/A) and a touchdown. He got another three receptions for 30 receiving yards, including a 20 yard first down screen reception, where the former Iowa State product showed his overall value.

Start your morning with some David Montgomery pic.twitter.com/eU3T4LfVzh

At Iowa State, Montgomery averaged 1181 rushing yards and 12 touchdowns through his sophomore and junior season. With a mediocre offensive line, Montgomery was able to average 4.6 Y/A and break over 185 tackles over those two years. With his seductive ability to break tackles and gain tough yards as a runner and receiver, Montgomery is the talk of Chicago as he looks to solidify a starting role on a hopeful playoff team.

The other running back looking to get significant carries is Mike Davis. The former San Francisco 49er and Seattle Seahawk has seen his role expand in every year he’s been in the league. As a high usage back up in Seattle, Davis was able to gain 514 rushing yards with a 4.6 Y/A and four touchdowns. Davis also has some value as a receiver with 59 career receptions and 408 yards through four seasons.

While he may not see the 112 carries he got last year, Davis looks to be a good backup and depth option at the position. He can also fit into a game plan to give Montgomery or Cohen rest as rushers. His upside in this position adds more versatility to the rushing game as a whole.

The seventh-round pick from Florida Atlantic University Kerrith Whyte looks to also be an option in the backfield similar to Taquon Mizzel’s role from last year, but his up and down performances in the preseason may cost him a lot of opportunities in the regular season.

The Bears rushing attack lacked last season as their primary rusher, Jordan Howard, had an incredibly inefficient year. This shouldn’t discourage fans from trusting the offensive line, which may be as strong as its been in years. The line is anchored by 2018 Pro Bowlers Cody Whitehair and Charles Leno Jr. on the left side, with 2018 second-round pick James Daniels at center. On the right side is three-time Pro Bowler Kyle Long and veteran Bobby Massie.

Family shot — the #Bears in the Pro Bowl : pic.twitter.com/lhOesqadsA

Last year the Bears saw the right side of their offensive line produce the seventh most explosive run plays, classified as ten or more yards, as well as the 17th most on the left side. When running behind the center, the Bears were painfully inefficient, but hope moving James Daniels from left guard to center will alleviate that.

With experience and promising youth on the offensive line, the Bears look to upgrade their running game from within. While the development of Mitchell Trubisky is vital to the success of the offense, having an efficient rushing attack will only make life easier for the Bears.