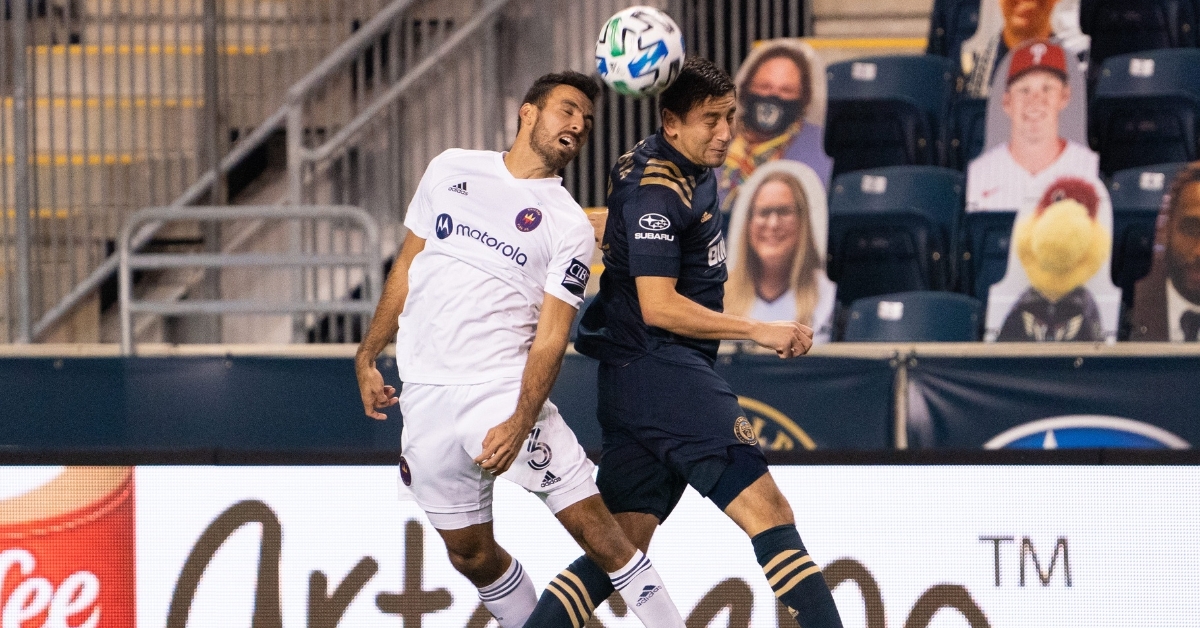 Already down a goal, the Fire managed to tie things up at the half before conceding a second-half goal. That goal proved to be the difference as the Fire battled but came up on the short end of a 2-1 decision. Philadelphia clinched a playoff spot with the win while the Fire's postseason hopes took a significant hit.

In a battle with both Inter Miami CF and DC United for the final playoff spot, every game is crucial from here on out. Fortunately, the Fire have a game in hand on both teams, giving them an extra shot at points. Wednesday would have been a massive opportunity for them to position themselves with a win better or, at the very least, earn a point to move into the playoff picture.

The early stages of the first half saw Alvaro Medran put up the game's first great attempt in the seventh minute only to have his shot miss wide. The rest of the first 20 minutes seemed to be evenly matched, but the Fire were getting the good looks on goal with Robert Beric getting denied by Andre Blake in the 20th minute.

Another Beric attempt two minutes later went wide, but that seemed to wake the Union offense up. Sergio Santos was looking for a shot on goal in the 24th minute, but the Fire defense stood tall and stepped in front of the would-be shot for the block. The game drastically changed two minutes later as Calvo had a handball in the penalty area, giving the Union a free-kick. Kacper Przybylko took care of it by beating Bobby Shuttleworth for the 1-0 Union

Giving a team like Philadelphia free goals is never a good thing, and the Union offense began to barrage Shuttleworth in goal. Shots from Przybylko, Jack Elliot, Santos, and Raymon Gaddis all got through as Shuttleworth continued to keep things close. Calvo continued to be the center of attention in the first half as his rough conduct in the 36th minute earned a red card and forced the Fire to play a man down the rest of the night.

Most teams would hang their head in a situation like that, but not the Fire, as they used this adversity to fuel a late half run. Ignacio Aliseda got a good look on goal in the 42nd minute to be denied by Blake yet again. Fortunately, Beric was at the right place at the right time and buried the follow-up shot to tie the game up 1-1. That score would hold up until the half as the Fire continued to battle.

Knowing they would be a man down for the entire second half, the Fire needed to come out aggressive in hopes of earning a point. That aggressiveness nearly paid off 53 minutes in when Beric had another great attempt off the Przemyslaw Frankowski attempt only to miss it wide. A few minutes later, Aliseda tried his luck, but Blake wasn't having any of it as the game remained tied 1-1.

Speaking of Beric, he had another look in the 64th minute, but the Union defense rose the challenge to block the shot-creating a counterattack the other way. Oliver Mbazio found Cory Burke close range with the defense on their heels, and Burke delivered the header for the 2-1 Union lead.

Shots from Burke and Przybylko a few minutes later were kept at bay by Shuttleworth, but it was at this time where you could see the Fire starting to show signs of fatigue. In need of a late goal, Madran controlled the ball and looked for a perfect cross into the penalty area. He delivered just that as Beric rose for a header only to see his attempt go just wide of the far post keeping things 2-1.

The Fire continued to keep the Union's pressure across the final 10 minutes as it looked like Philadelphia took their feet off the gas. With extra time winding down, the Fire looked to design one more offensive set in hopes of tying things late. They had their chance in the 93rd minute, but both Fabian Herbers and Gaston Gimenez saw their attempts blocked as the Union pick up the 2-1 win.

With the win, Philadelphia not only clinched a playoff spot, but their 44 points put them in the top spot in the East. The Fire remain at 21 points, but with Miami losing, they remain tied in the points side of things for that final spot with three games to go. The fire will be back on the pitch this weekend when they travel to Nashville on Saturday. With 28 points, Nashville clinched a playoff spot last night.