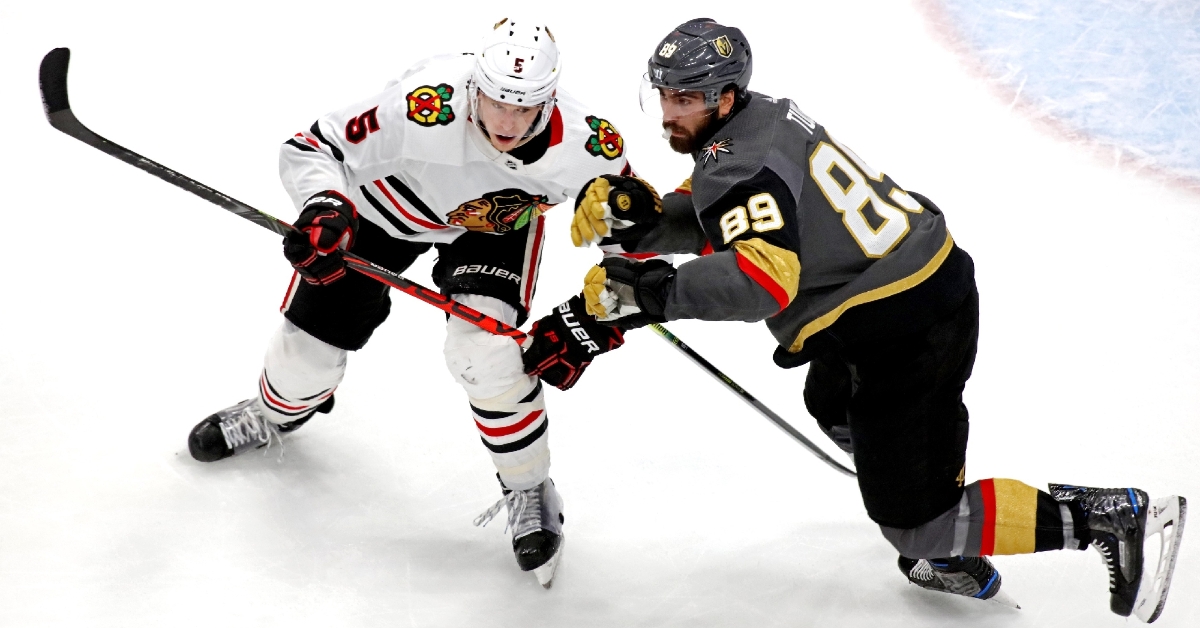 Blackhawks are out of the playoffs (Gerry Thomas - USA Today Sports)

With their backs against the wall in game four, the Blackhawks were saved by Corey Crawford as his performance showed us why he had been a two-time Stanley Cup winner. With the win or go home mindset still in place, it was an all or nothing game for Chicago as a win Tuesday would keep the series going.

Despite another intense first period that saw the Blackhawks take the lead, Chicago found themselves in another battle, which has been the case all postseason. However, this series didn't go their way as a third period Vegas goal proved to be the difference as the Golden Knights downed the Blackhawks 4-3 to win the series 4-1.

The trend of the Blackhawks getting pounded on goal continued once again as Crawford nearly saw 40 shots on goal. In the nine postseason games, Crawford averaged to see 36 shots on goal with six games of being tested with 40 or more. Even with the shots heavily in the Vegas favor once again, the Blackhawks worried more about quality instead of quantity, which paid off in the first period.

With the score tied midway through the first, Chicago was greeted to a Jonathan Toews sighting. After being held in check much of this series after a strong qualifying round, Toews picked up his fifth goal of the postseason giving the Blackhawks a 1-0 lead. As the first period was winding down, the Blackhawks continued to control things on the ice, which helped pave the way for another goal. It was time for Alex DeBrincat to come through once again as his second goal of the postseason doubled the Blackhawks lead at 2-0.

That two-goal lead was short-lived as the Golden Knights continue to find ways to score late in periods. Approaching 30 seconds remaining in the opening frame, Vegas began to show more signs of life as Max Pacioretty drilled one home for his first cutting the lead to 2-1 after one period of play. Vegas continued to use that late period momentum to dray even in the second as Mark Stone tied things up 2-2 less than a minute into the second period.

As both teams were back to even, the early portion of the second period was frantic, with both sides beginning to open their play. That led to the Blackhawks retaking the lead four minutes as Patrick Kane took the Drake Caggiula assist for his second of the postseason making it 3-2 Blackhawks. Not to be outdone, the Golden Knights responded when Alec Martinez capitalized on a Chicago shorthand situation for his first to bring things even 3-3.

Given what we saw early in the second, you got a sense that this was going to be a dog fight as the Blackhawks played for their postseason lives, while Vegas continued to answer. We were dead wrong on that scenario as both teams went scoreless the final 13 minutes of the second setting the stage for what looked to be an exciting third period.

Unfortunately, that excitement turned to frustration with the Blackhawks coming out flat and giving the Golden Knights another quick goal to start a period. Less than two minutes later, Alex Tuch took the Shea Theodore and Jonathan Marchessault pass and skate into the Blackhawks end. After it looked as if Crawford made the initial save, Tuch somehow got the puck between his legs and the net for his fourth goal giving the Golden Knights the 4-3 lead.

With plenty of time left, the Blackhawks needed to give it their all or would indeed be heading home for the offseason. Despite their best efforts, the Blackhawks were only able to put up 26 shots on Robin Lehrer, who stopped 23 of those 26. That included a flawless third as he settled in nicely after a shaky start. Down to their final two minutes, it was time for the Blackhawks to pull Crawford to get that extra skater on the ice. With several last-ditch efforts on goal, the Blackhawks were unable to get it done as the Golden Knights hold on for the 4-3 win ending the Chicago season in the quarterfinals.

MVP: One can make a case that Crawford was the overall MVP of this series, considering how many shots he faced and how many saves he made to keep things close. Even though he registered just one assist in the loss, Brandon Saad is my MVP. His four shots on goal led the team, and he was active on the offensive end all night. Unfortunately, he couldn't put one home.

Chicago Cubs lineup vs. Reds at Field of Dreams: Madrigal at leadoff, Suzuki at cleanup