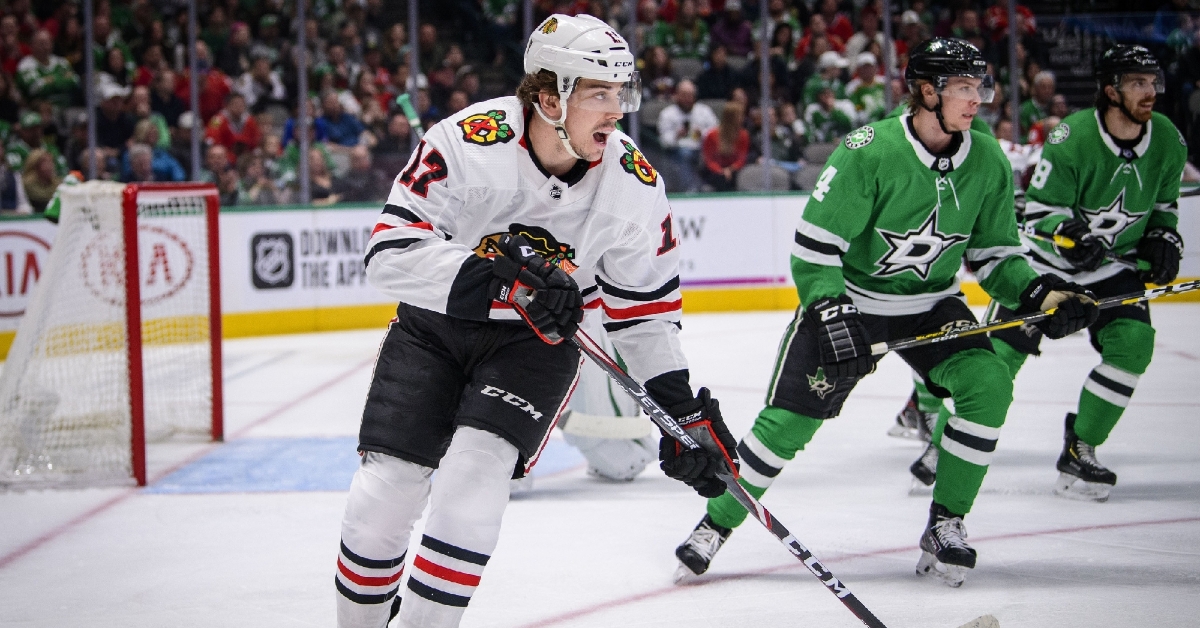 It has been evident since the offseason started that Blackhawks GM Stan Bowman has a rebuild on his mind at this point. With Corey Crawford not tendered and Brandon Saad traded along with Olli Maatta, the rebuild mode is in full go as the Blackhawks are retooling their roster on the fly. One player, the Hawks, need to decide on is Dylan Strome as he remains unsigned.

Most Blackhawks fans are enormous fans of Strome and would love the team to sign him to an extension. With the season just over a month away and Strome still left unsigned should the Blackhawks consider trading him at this point while his value is high. As things sit right now, the Blackhawks only have Strome left to sign and sit with just over five million in total cap space.

Even if Strome wanted a two-year deal, he would be asking somewhere in the range of 2-4 million per season, leaving the Blackhawks with room to play. Part of the reason he is unsigned deals with some of their offseason pickups like Lucas Wallmark, Mattias Janmark, and Kirby Dach as they are looked to have significant roles this season.

Wallmark is a natural center, while Janmark can play both the center and wing positions. The Blackhawks also have a log jam of six players who can play either the wing or center position making things difficult for Strome. Strome is a center, and unlike the rest of his teammates, he is limited to that spot due to his skating technique.

With Saad now out of the picture, Jonathan Toews and Dominik Kubalik line is missing some of their firepower, particularly the right-wing position. Would a trade with the Vegas Golden Knights once again be an ideal fit? The Blackhawks could essentially send Strome and a future draft pick to Vegas in exchange for Right Winger Alex Tuch.

This deal makes a lot of sense for the Blackhawks because it allows them to fill the right-wing position of need by acquiring someone stuck behind both Mark Stone and Reilly Smith in Vegas. Tuch is an immense power forward, and if he were on any other team would immediately be a top-six player. Like many players this season, Tuch had somewhat of a down year scoring just 17 points in 42 games. He did, however, respond in the postseason putting up 12 points across their 20 playoff games.

Tuch had a terrific 2018-19 campaign, in which he netted 52 points across 74 regular-season games. He is the perfect winger to pair with both Toews and Kubalik as he provides a great shot and great energy and skill to a position of need for Chicago. Why this deal makes sense for Vegas is a no brainer.

With Paul Stastny traded away, the Golden Knights need a center. Strome is not only a center but is an excellent second-line center. Not only would Strome not cost a ton in financials, but it would help Vegas out in the long run as they were unable to trade Marc-Andre Fleury this offseason. Adding a player like Strome could make the Golden Knights a tough team to play against as they could throw so many skilled lineups at teams.

Strome being unsigned is a huge question mark as no one knows what the Blackhawks plan is for him. A trade like this could benefit both sides by acquiring players to fill positions of need. Other pieces like picks or prospects may have to be included for this deal to happen, but it will be centered around those two names if it indeed happens.