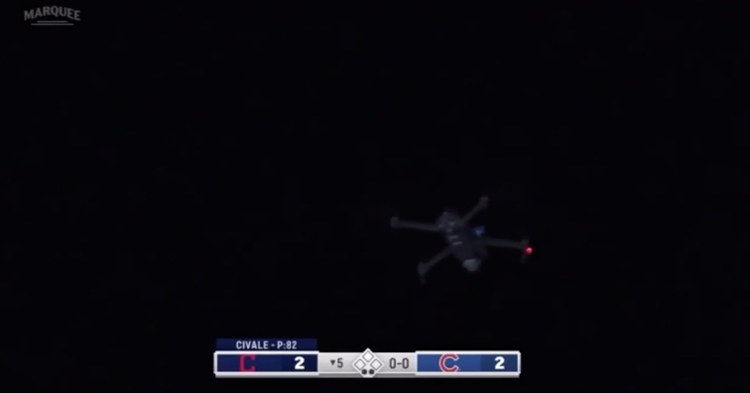 A pesky drone caused a seven-minute delay in the Cubs-Indians game at Wrigley Field on Wednesday night.

CHICAGO — With no fans present at MLB ballparks this season, drone delays have been occasional hindrances, with troublemakers flying their remote-controlled flying devices over the diamond at various venues in order to get a better view of the game. Wrigley Field became the site of a drone delay for the first time on Wednesday.

With the Chicago Cubs and the Cleveland Indians tied at 2-2 in the bottom of the fifth, a drone hovered over the field, causing a delay. Due to a city ordinance in Chicago, flying a drone over the Friendly Confines is illegal, so the mischievous drone operator might get caught in a legal bind if caught. Maneuvering up and down above the playing surface, the drone, which even landed on the outfield grass at one point, served as a short-lived annoyance before play resumed a little over seven minutes later.

Our first drone delay of the season, and, well, ever. pic.twitter.com/uJR6oSX8yf

The @Indians have their first drone delay of 2020! pic.twitter.com/7hNSHLj44O

Francisco Lindor & Jose Ramirez hid behind the umps during a drone delay ??

"You bring the bat out and crack it in half,see how it flies."