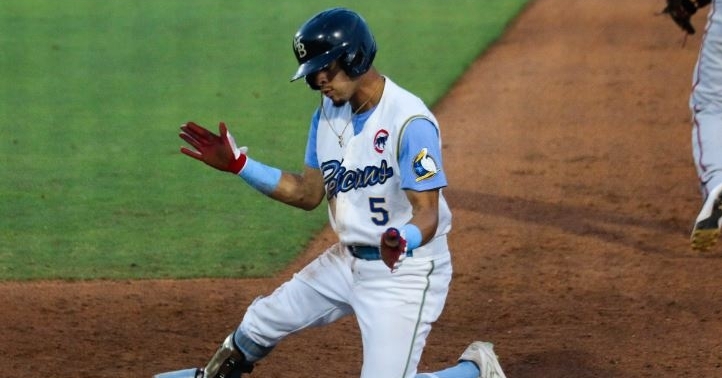 Pagan hit .367 with three homers in June (Photo via Pelicans)

Pagán, who turns 22 on July 8, hit .367 (29-for-79) with five doubles, two triples, three home runs, 27 RBI, a .474 on-base percentage and a 1.069 OPS in 23 games in June for Myrtle Beach. His 27 RBI in June were the most among Cubs minor leaguers, while his .367 average was the second highest. The left-handed hitting outfielder raised his season average from .233 to .292 during the month, which included eight multi-hit games and five three-hit efforts. On June 5 vs. Delmarva, Pagán went 3-for-3 with a home run and a career high-tying five RBI.

Palencia, 22, went 1-2 with a 3.63 ERA (9 ER/22.1 IP), 28 strikeouts, a 0.99 WHIP and a .207 opponent average (17-for-82) in five June starts for South Bend. The right-handed pitcher twice tied a season high with seven strikeouts, June 4 at Dayton and June 22 vs. Peoria. He walked five batters while his 28 strikeouts were tied for the fourth-most among Cubs minor leaguers. Palencia finished the month by tossing 9.2-straight scoreless innings during his final two starts.

The five-foot, 11-inch Palencia entered the 2022 season ranked as the Cubs No. 25 prospect according to MLB Pipeline. He has made 27 career minor league appearances (26 starts) in parts of two professional seasons, going 2-4 with a 4.73 ERA (48 ER/91.1 IP) and 113 strikeouts. The San Carlos, Venezuela native was originally signed by the Oakland Athletics as an international free agent, February 13, 2020. He was acquired by the Cubs July 26, 2021, with outfielder Greg Deichmann for left-handed pitcher Andrew Chafin.