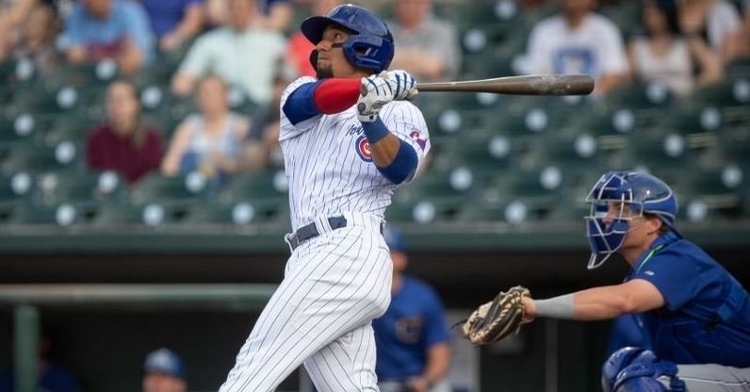 I think we can safely assume that this will be an entertaining and exciting minor league season. After already posting a pair of no-hitters and seeing every team virtually get hot at the same time, get on out to the ballparks this summer.

This week has been all about winning games, as the organization hasn't lost more than one game per night this week. Looking to make it 4-4 this week in terms of posting one loss or less, the Cubs saw their system continue their winning ways going 3-1 for the fourth time twice this week.

The Cubs are feeling a sense of relief this season as several of the star players from Omaha are now in the bigs. Due to that, Iowa has been looking to capitalize this week and has done so in a big way. Their most recent game saw them come away with another victory, with this one coming via a walk-off.

Caleb Killian continued to do his thing and has firmly cemented himself as the ace of this staff. Despite yet to last more than four innings, Killian has posted a 1.57 ERA and allowed just one run on Friday with six punchouts. It is only a matter of time before he makes the bigs should he keep this up.

With Killian setting the tone on the mound, the Cubs offense set the tone at the plate in the first inning. Nelson Maldonado keeps on hitting as his RBI double put the Cubs in front 1-0. Later that inning, it was Robel Garcia once again as he connected for another homer to make things 4-0. Garcia has now homered in four straight games and can't be stopped right now.

ALL HE DOES IS HIT RO-BOMBS???? Make it five home runs in four games for Robel Garcia. pic.twitter.com/NrIrNDtbAp

Killian made it to the fifth for the first time this season, but after failing to record, an out was charged with his lone run as Vinnie Pasquantino worked a bases-loaded walk. Still holding a 4-1 lead in the seventh, Omaha started to see their offense come to life as they took it to Aneuris Rosario.

On the strength of a Passentino three-run shot, Omaha managed to draw even before the Clay Dungan safety squeeze put them in front 5-4. Thankfully Jared Young was able to grab that momentum right back as he tied things up with a homer in the bottom half of the seventh as these two teams headed to extras.

In that extra frame, the Cubs got the last laugh as Nelson Velazquez came through with an RBI single and delivered the walk-off win for his team.

That's a walk-off winner! Nelson Velazquez is your @EMCInsurance Player of the Game going 3-for-4 including this walk-off single. pic.twitter.com/P9jbqBK9Fh

The Smokies continue to roll right along on this homestand as they have clinched the series with two games left to play. With Manuel Espinoza facing off against Caleb Sampen, Espinoza got the upper hand as he allowed just one unearned run in four innings of work before turning things over to Blake Whitney and Wyatt Short.

That run came in the third inning as a costly throwing error gave the Biscuits their lone lead 1-0. Wasting no time in the bottom half, Harrison Wenson tied things up with his second homer of the season before the suddenly scorching Bryce Ball picked up another RBI hit to give the Smokies the lead. The next inning saw Wenson homer for a second time, and just like that, you had a 4-1 Smokies lead.

With Whitney now on in relief, the Biscuits used a pair of long balls to draw, even with Brett Wisley connecting for a two-run shot in the fifth and Kameron Misner adding a solo shot in the sixth. Looking to cash in during their half of the eighth, Yonathan Perlaza gave the fans something to cheer about as his fourth homer proved to be the difference in a 5-4 win. Wenson was one of five hitters to record two hits as he led the way with three RBIs. Darius Hill, Andy Weber, Ball, and Perlaza had multiple as Chase Strumpf was the lone player without a hit.

Since this 12-game homestand started, the Cubs have done nothing, but win, going 9-1 thus far. Coming off their first loss in a week on Thursday, the offense was in full swing Friday as the Cubs dominated the Tin Caps in every facet.

Making another start was 2021 first-round pick Jordan Wicks who continues to go through the motions. Despite lasting 4 2/3 and failing to get the win, Wicks was solid, allowing two runs on three hits to go with five strikeouts. He handed things off to Brad Depperman and Hunter Bigge as they allowed just two hits and struck out eight the rest of the way.

Both runs off Wick came in the first inning as Robert Hassell homered for the second time in this series. The long ball is starting to become an issue for Wicks as that is something he would love to figure out. South Bend not only had the answer in the bottom of the first using an error and an Owen Caissie single to tie things up, but ended the game with 11 unanswered runs.

Seven of those runs came across the sixth and seventh innings when Yohendrick Pinango took over. Leading 5-2 after the Luis Verdugo RBI single, Pinango went deep for his first of the day putting South Bend in front 7-2. In his next plate appearance, which came one inning later, Pinango unloaded for a grand slam as he capped off his day with six RBIs in the 11-2 win.

What a night on Friday for Yohendrick Pinango!

2 monstrous @hoosierlottery home runs (including a grand slam), 6 RBI, and a big smile trotting around the bases ?? pic.twitter.com/G0oCcPJlhn

Despite being down 3-1 in their series so far, this has been a fun series as these are the two best teams in the Carolina League by far. On Friday, Luis Devers took a hard-luck loss as he gave the Pelicans 4 1/3 innings of work and was charged with two runs (one earned).

The problem for Myrtle Beach was a lack of offense as Antonio Jimenez set the tone on what would be a 10 strikeout night and no earned runs allowed. Devers did little favors early as a passed ball gave the Riverdogs a 1-0 lead in the first.

Fortunately for him, the Pelicans were able to bounce back in the bottom of the second as an error helped set up the Juan Mora RBI groundout. However, that would be all the offense for the Pelicans as the Riverdogs scored the game's final three runs, with Freddvil Chavez picking up a fourth-inning sacrifice fly and Carson Williams adding a two-run double.

The win moves Charleston to 21-10 while the Pelicans fall one game back of first at 20-11. Mora, James Triantos, Kevin Alcantara, and Kevin Made were just a few hitters to come away with a hit.

Top Nelson Maldonado News
Top Chicago Sports News of the Week
Partner of ChicagoBearsHQ.com, ChicagoBullsHQ.com, CubsHQ.com, and TigerNet.com
ChicagoSportsHQ is an independent site and is not affiliated in any way with Chicago Professional Sports Teams.