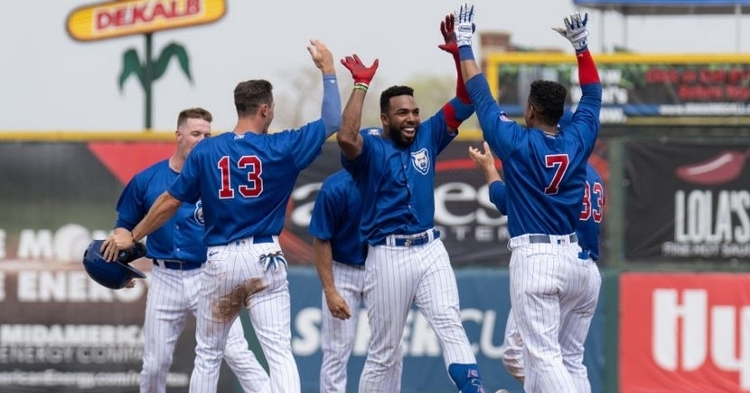 It is becoming a broken record for how much success the Cubs minor league system is having, which continued on Wednesday. Not only did the Cubs go 3-1 on the docket for the second consecutive night, but it marked the third time in the last six days they have accomplished that feat.

Throw in the second organizational no-hitter of the season, and there was plenty of excitement to go around. Fans should be proud and happy with what they see and how this could bolster the Cubs' future.

For the first time since early in the season, the Iowa Cubs are back above .500. They accomplished that feat against their nemesis from 2021, using a walk-off win against the Storm Chasers to get it done.

Matt Dermody was on the bump, and once again, he was touched up, but battled through it to give his team a chance. All you ask for is a chance when you have guys like Bryan Hudson, Brendan Little, and Cayne Ueckert waiting in the wings.

A large chunk of the action came in the fourth inning when seven total runs were scored. Considering how the first three innings saw no runs come across, this was a long time building. Freddy Fermin gave Omaha the 1-0 lead with an RBI double and then came home on the Gabriel Cancel single. With a passed ball making things 3-0, JaCoby Jones used another RBI hit to give the Storm Chasers a 4-0 lead.

Looking to trim a little bit off of that lead, the Cubs responded in a big way as Nelson Maldonado picked up his first homer to make things 4-2.

Tyler Payne continues to see the ball well and added an RBI single to bring the Cubs within 4-3. Speaking of someone seeing the ball well, Robel Garcia is scorching hot as he went deep for the third time in his last two days to make things 4-4.

The man can't be stopped. Robel Garcia hits his third home run in the past two days to tie the game. ???? pic.twitter.com/wfDlqWZAKF

With Omaha back in front, it was time for Maldonado to come through again as his RBI double put Iowa on top for the first time, 6-5. The Storm Chasers wouldn't go away and used the Dairon Blanco homer to pull even in the ninth. Iowa would end up with the last laugh as Narciso Crook came a way with an RBI single to lift the Cubs to a 7-6 walk-off win.

I don't want to take anything away from Iowa and their win, but the real story of the night was in AA. What started with Peyton Remy giving the Smokies six hitless innings with eight punchouts turned into a collaborative effort as Danis Correa, and Eury Ramos capped off the no-hitter for the Smokies.

Not only did the Smokies pick up another no-hitter, but the offense also came out swinging, with Darius Hill and Bryce Ball picking up first-inning homers to build an early 3-0 lead. That would be more than enough offense as the Smokies pitching staff struck out 13 and walked three.

Looking to add to their lead in the third, Ball picked up his third RBI of the day, extending the lead to 4-0. Chase Strumpf capped off the scoring with an RBI as the Smokies took that 5-0 lead and ran with it the rest of the way. Ball was one of four players with multiple hits, joining the recently promoted Alexander Canario, Andy Weber, and Strumpf. Ball also collected three RBIs in the win.

IT'S A NO HITTER! Peyton Remy, Danis Correa, and Eury Ramos combine for the first Smokies NO HITTER since 2013! #Cubs #SmokiesBaseball #CubTogether #ItsDifferentHere pic.twitter.com/P2kFkwBl14

There is a reason why they call it home sweet home, and right now, the Cubs are doing some serious home cooking. Although not the easiest or prettiest wins, the Cubs continued to do their best at home and battled to another hard-fought 6-5 win.

Even with the bullpen nearly letting this one get away late, you have to applaud Manuel Espinoza's effort on the mound. He went five innings, but he allowed two runs, with only one coming as an earned run. Apart from Eduarniel Nunez, who was touched up for three runs, the Cubs bullpen was strong and did what they had to do to secure the win.

Facing off against Jackson Wolf, the Cubs wanted to make sure they delivered an early lead. With the score sitting 0-0 in the third, Fabian Pertuz ended that as his RBI single gave the Cubs the lead for good 2-0. Cole Roederer followed that up with his first RBI with South Bend and helped extend the lead to 3-0.

The next few innings saw the Tin Caps close the cap to 3-2 as an RBI groundout from Angel Solarte in the fourth put Fort Wayne on the board and then saw a fifth-inning error to another run. Expecting the Tin Caps to come at them once more, Bradlee Beesley did his part to bust the game wide open as his RBI triple made things 4-2. Beesley scored on the Matt Mervis single as the Cubs were leading late.

The seventh inning is when the Tin Caps put the most pressure on as they started to get after Nunez. What began with Joshua Mears sacrifice fly ended with singles from Jarryd Dale and Solarte as the Tin Caps pulled even with South Bend.

Still in the seventh, it was the Pertuz coming through in the clutch as his RBI groundout gave the Cubs the lead and proved to be the winning run in a 6-5 victory. Roederer picked up his first two hits with South Bend and joined Mervis on a multi-hit day. Pertuz led the way in RBIs as he recorded three of them in the win.

For the first time this season, it seems as if the Pelicans have gone into a bit of a rough patch, dropping their second straight game. However, it isn't like they are losing to bad teams as Charleston has a slightly better record than the Pelicans and continue to show everyone why.

Coming off by far his best outing of the season, Richard Gallardo was back on the bump, took the loss on the evening, Gallardo was tagged for three earned runs in four innings of work as the Pelicans offense couldn't bail him out.

Gallardo allowed all the runs in one inning as the Riverdogs jumped on him during the second inning. What started with an error leading to the game's first run finished with a Luis Leon double and the Gionti Turner sacrifice fly as the Riverdogs were up 3-0. Little did they know it would be all the offense they would need against this high-powered attack.

The lone run for Myrtle Beach came in the fourth inning when BJ Murray JR worked a bases-loaded walk. That would be it offensively for Myrtle Beach as the Riverdogs tagged on a pair of runs later in the game to take game two of the series.

Top Bryan Hudson News
Top Chicago Sports News of the Week
Partner of ChicagoBearsHQ.com, ChicagoBullsHQ.com, CubsHQ.com, and TigerNet.com
ChicagoSportsHQ is an independent site and is not affiliated in any way with Chicago Professional Sports Teams.