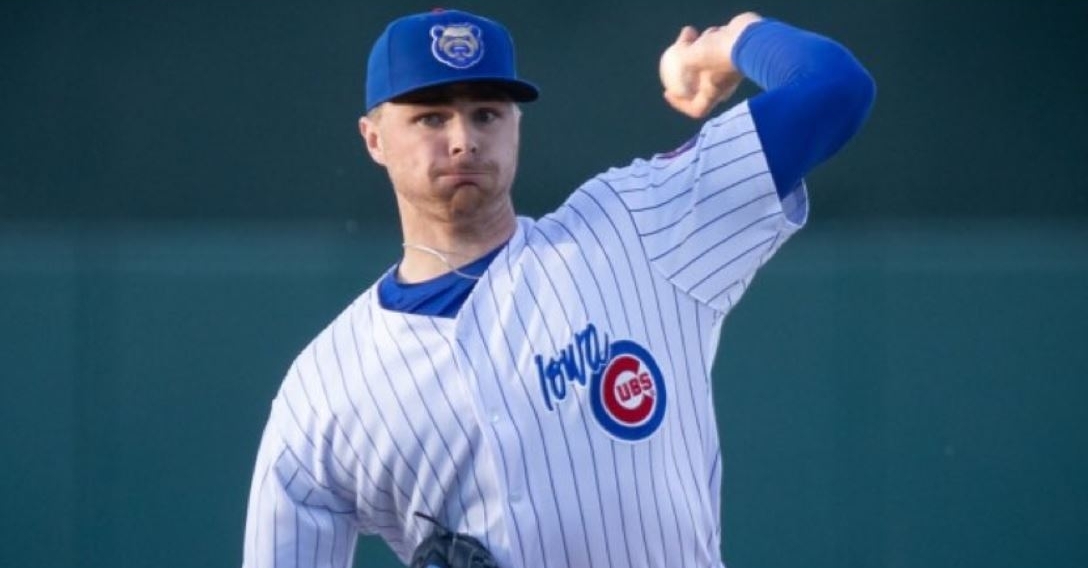 Things haven't gone too well the past few days for the Cubs Minor League system, but they still had a chance to end the week on a high note. Despite suffering another losing record on Sunday, the organization managed to go 2-3, but was part of much more competitive games.

With a chance to take the series on Sunday, the Cubs received a fine pitching performance from a trio of pitchers, but the offense couldn't back them up. Javier Assad made his AAA debut, giving the Cubs three innings of one-run ball with three strikeouts. He was relieved by Daniel Norris and Sean Newcomb as they combined to allow one unearned run in the final five innings with eight strikeouts.

Sometimes all it takes is one run, or in this case, one player as Carter Bins, did all the damage for the Indians. His homer in the second was not only the go-ahead run, but the game-winning run as the Cubs failed to score. Bins added a bases-loaded walk in the fourth for the final run. Iowa had three hits on the afternoon, with Nick Madrigal, Darius Hill, and Jackson Frazier grabbing those hits.

In the makeup of Saturday's postponement, fans were treated to a good old-fashioned pitcher duel which the Barons ended up winning. Walker Powell continues to battle some command issues since his AA promotion, but gave the Smokies four innings of one-run ball.

He was relieved by Bailey Horn and Jeremiah Estrada as a late-game unearned run proved to be the difference. For the Barons, it was all about Scott Blewett and his five-inning performance as he held the Smokies to just two hits in the win.

It may have taken four innings for someone to break through, but that someone was Birmingham, with Yoelqui Cespedes putting them in front for good 1-0 with a double. Cespedes was part of the second run in the sixth as an errant pickoff throw allowed him to score, which was the game's winning run. The only offense the Smokies would have came in the final inning when Chase Strumpf connected for his 14th homer.

As if losing the way the Smokies did in their makeup game wasn't challenging enough, how about allowing five runs in the final inning to suffer a walk-off defeat? That is precisely what happened as the Smokies took a doubleheader sweep on Sunday.

After a long rough patch that seemed to last the entire season, Peyton Remy is starting to bounce back as he allowed three runs (two earned) in four innings of work. He did his part, but Danis Correa didn't, as he allowed the five runs in the seventh to take the loss.

The Smokies wasted no time grabbing the lead with the reigning Southern League player of the month, Jake Slaughter going deep for the solo shot in the first. Not only would the Barons answer with an error in the first and third, but mix those with the Moises Castillo double in the fifth, and the Smokies found themselves in a 3-1 hole.

That deficit changed quickly as the Smokies bats erupted in the fourth. What started with a Delvin Zinn bunt RBI single was paired with a wild pitch, and just like that, it was 3-3. The Yonathan Perlaza double shortly after put the Smokies in front 5-3 before the Matt Mervis double capped off the five-run frame with the Smokies up 6-3.

Tennessee would add another run in the sixth off the Slaughter double, but the Barons saved their best efforts for last. Down to their final three outs, a Jose Rodriguez double and Tyler Neslony single pulled the Barons to within 7-6. That was until Raudy Read saved the best for last as he walked off the Smokies with a two-run shot handing them a crushing 8-7 loss. Perlaza picked up three more hits to lead the way, with Slaughter adding two.

After the Timber Rattlers had their way with the Cubs the previous two games, South Bend said enough is enough and put together a solid team win. It all started with Daniel Palencia on the mound as the June pitcher of the month allowed just two runs in four innings while adding seven punchouts.

Following his departure saw the combination of Riley Martin, Michael McAvene, Zac Leigh, and Eduarniel Nunez take care of business while the Cubs offense took care of the rest. It didn't take long for the Cubs to grab the lead as they played long ball in the first with Pete Crow-Armstrong and Jake Washer delivering solo shots.

South Bend wasn't done having their offense lead the way as Yohendrick Pinango connected for a double in the third to make things 3-0, which was followed by the Jonathan Sierra sacrifice fly extending the advantage to 4-0. Comfortably in front, the Timber Rattlers pulled within 4-2 in the fourth as Joe Grey Jr picked up the lone hit off Palencia by connecting for a home.

That would be as close as Wisconsin would get with South Bend taking on two runs in the seventh off the Pinango fielder's choice and Washer single to win 6-2. Crow-Armstrong is finally adjusting to High-A pitching as he went 3-3 with a walk. Washer and Sierra added multi-hit efforts in the win.

The best way to respond to an embarrassing defeat is to get back on the field and take care of business. That is what the Pelicans did on Sunday as they salvaged a series tie with Columbia. Although Porter Hodge gutted it out through 4 2/3, he didn't last long enough to grab that win. That went to Tyler Santana, who is now 7-0 in relief this season.

Hodge got off to a rough start as his wild pitch in the first allowed the Fireflies to grab the lead before the Gary Camarillo sacrifice fly in the second doubled the Columbia lead 2-0. Outside of that, Hodge was good, but did have to battle through command issues.

He gave the Pelicans offense a chance to come back, and they started to do that in the third when a throwing error gave Myrtle Beach their first run of the night. Another error followed that in the fourth, and just like that, things were tied 2-2.

When you give a team like the Pelicans as many chances as the Fireflies did, it was only a matter of time until something happened. That something came in the sixth and seventh innings when the Pelicans pushed across five runs to put the game away.

Three of those runs came in the sixth when Matt Warkentin delivered the go-ahead single ahead of the game-winning Malcolm Quintero double. Jacob Wetzel added a sacrifice fly in that inning, which saw the Pelicans grab a 5-2 lead. Warkentin would add to his strong game in the seventh by connecting for an RBI double that capped off the Myrtle Beach scoring with the Pelicans in front 7-2 before winning 7-3.

Warkentin was one of three players to have multiple hits as he led the way with three RBIs. Ezequiel Pagan and Quintero joined him as they provided six of the team's nine hits.

Back in Myrtle Beach on Tuesday night against Fayetteville.#MBPelicans pic.twitter.com/YMgZK5O4Hx