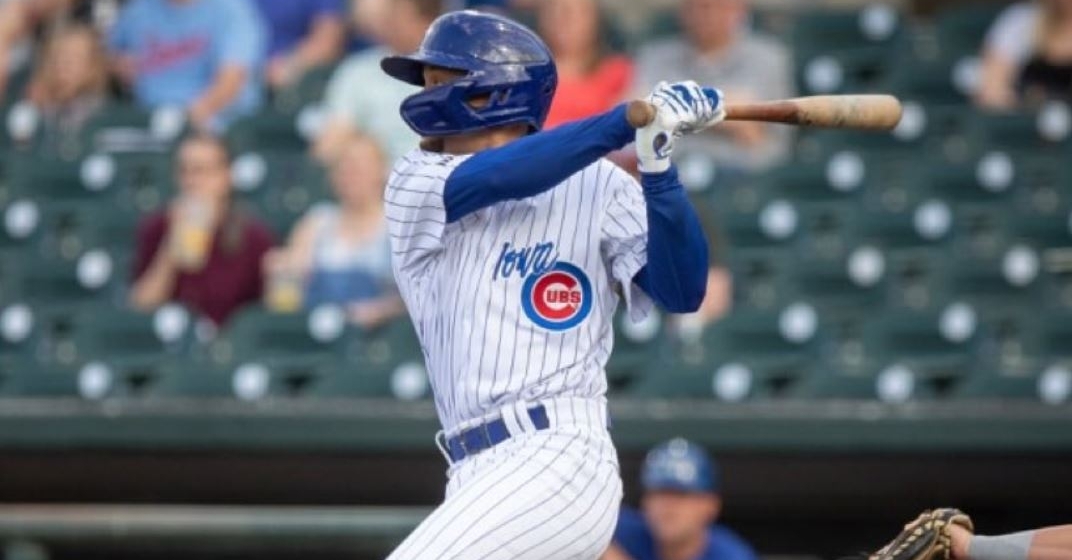 Wednesday was another great night on the diamond for the Cubs minor league system, which is becoming a common trend in recent weeks. Even with the South Bend Cubs having their game rained out, or should I say stormed out, there were four more games for fans to follow.

Two of those games resulted in wins, with the Myrtle Beach Pelicans taking the lone loss in what was a 2-2 night for the organization. One of the two teams that came away with a win is playing their best ball of the season and is starting to make a case as the best team in the division for the second half.

For as inconsistent as the Iowa Cubs have been this season, they do provide the fans with some exciting games, and with a doubleheader on Wednesday, it rang true. Game one was a regularly scheduled game, saw the Mud Hens jump out early only to have the Cubs rally fall short.

Brandon Liebrandt was not happy with his performance allowing five runs on 10 hits in just 3 1/3. Once the bullpen entered, they pitched well, including Wyatt Short, who threw two perfect innings with two strikeouts.

Most of the damage against Liebrandt came in the second inning when Jack Lopez connected for the three-run shot to make things 3-0.

Brandon Davis added an RBI single in the third, with John Valente picking up a solo shot in the fourth to extend the lead to 5-0.

That was when the Cubs started to make their comeback with John Hicks going deep for the third time in two games to make things 5-2, with Nelson Maldonado adding a solo shot to make things 5-3. Narcisco Crook continued the comeback effort with an RBI single in the fifth, but that would be it in what was a 5-4 win for Toledo.

Got it done in game two. pic.twitter.com/WR1wddqlaO

In game two of the day, which was a make-up for April 17, it was all Iowa as they picked up a nice win. This was the game to pay attention to as Wade Miley made another rehab start as he works his way back to the majors.

Miley wasn't great, going just 2 1/3 and allowing all three runs as Brendon Little and Ben Leeper pitched the remaining 4 2/3 innings keeping Toledo scoreless over that time. Trailing 1-0 in the bottom of the first, Andrelton Simmons tied things up as he connected for his first homer of the season.

Despite his struggles on the mound, Miley was backed by plenty of offensive support as Iowa took a 4-1 lead in the second off of solo shots from Trent Giambrone and Levi Jordan, with Alfonso Rivas adding an RBI single.

Levi Jordan makes it back-to-back solo home runs and brings our lead to 3-1 over Toledo. pic.twitter.com/hrtV4ryHIC

Trent Giambrone gives us the lead with this solo shot! pic.twitter.com/0kIA8j8I7P

Toledo continued to keep things close in the third, with Josh Lester going deep for No. 17, pulling the Mud Hens within 4-3.

That would be the last of their offense as Iowa used some late-inning noise to pull away. After Darius Hill picked up an RBI single in the fifth, the Cubs pushed across three more runs in the sixth, with Rivas and Hill picking up RBI singles mixed with an error to win 8-3.

The Smokies continue to establish themselves as one of the best teams in the second half as they remain in first place. One day after letting one nearly get away, the Smokies made sure that didn't happen again as they doubled up the first-half champs 6-3.

Chris Clarke took the ball in this one and earned his fifth win of the season. Over his five innings, Clarke was very good, allowing just two runs to go with seven punchouts. CD Pelham and Danis Correa took over from there as each of them worked two innings and came away with eight strikeouts.

The Smokies didn't waste any time grabbing the lead, with Yonathan Perlaza going deep in the first to make things 1-0.

Rocket City answered with a Livan Soto double in the third to tie things up before the Smokies took the lead for good in the fifth. For the second time in three at-bats, it was Perlaza going deep as his 17th homer and the second of the game put the Smokies up 3-1.

Now one from each side of the plate pic.twitter.com/k57UzjicJW

Leading 3-2 in the seventh, Tennessee put the game away with a big inning as Jake Slaughter opened the scoring with an RBI single ahead of the Alexander Canario RBI groundout. Bryce Ball added an RBI triple later in the inning to cap off the three-run frame with the Smokies in front 6-2. Torii Hunter Jr grabbed a solo shot in the bottom of the seventh for the game's final run as the Smokies take a 2-0 series lead 6-3.

Perlaza had a massive day from the leadoff spot, going 4-5 with two homers and three RBIs to lead the offense. Slaughter added three hits, with Luis Vazquez chipping in with two.

Remember the name: Yonathan Perlaza goes 4-5 with 2 home runs as the Smokies take the win on Wednesday in Madison. #Cubs #SmokiesBaseball #FlyTheW pic.twitter.com/vWufXhV0mg

Tonight’s game ?? the @SBCubs has been postponed due to rain ??

Tickets Saturday will be good for both games. pic.twitter.com/FPwhH2En16

Sparked by a trio of big innings for the Hillcats, this was a night to forget for the Pelicans as they were dominated 13-5. Score aside, this was a close game until late as eight of the Lynchburg runs came after the sixth inning. Luke Little took the ball and suffered the loss after allowing four runs and three earned in just two innings.

Things were not so bad for Little in the early stages, with Juan Mora giving the Pelicans a 1-0 lead before a wild pitch made things 2-0 after one inning.

The first inning is for triples. pic.twitter.com/RJRDWQhJ6c

That score held until the third when Lynchburg had their first three big innings. Singles by Isaiah Greene and Lexer Sadly led to two runs with a sacrifice fly, and an error gave Lynchburg a 4-2 lead.

Wilfri Peralta extended that lead to 5-2 with a single in the fifth, only to have the Kevin Alcantara groundout keep things close 5-3 after six. On the strength of homers from Junior Sanquintin and Joe Donovan, that 5-3 game became an 8-3 lead, and the Hillcats were not done as they brought home five more runs in the eighth to make things 13-3.

The Pelicans did score a pair of runs in the eighth inning, but it was not going to be enough in the 13-5 loss. Ezequiel Pagan led the Pelicans offense with three hits as five other players had one.

Top Wyatt Short News
Top Chicago Sports News of the Week
Partner of ChicagoBearsHQ.com, ChicagoBullsHQ.com, CubsHQ.com, and TigerNet.com
ChicagoSportsHQ is an independent site and is not affiliated in any way with Chicago Professional Sports Teams.