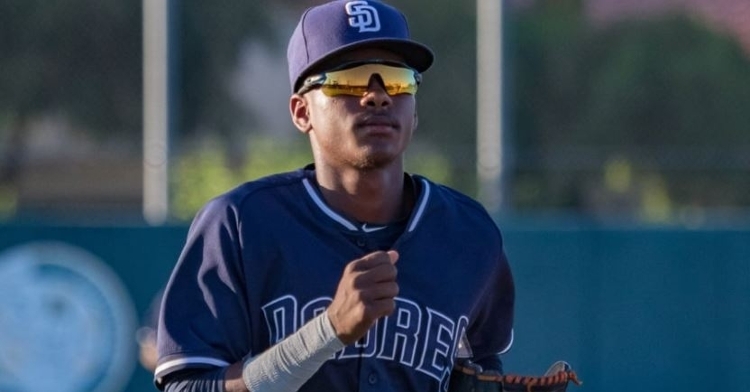 More than a year after the Cubs traded Yu Darvish and Victor Caratini to the San Diego Padres, you still have some fans who are not sold on that deal. Most of them understood the reasoning behind it, but to get Zach Davies and four prospects in return is where the questioning comes. Darvish was coming off a CY Young caliber season, and Caratini emerged as a solid backup catcher who was the personal catcher for Darvish.

Most fans were ok with Darvish leaving, considering his up and down career with the Cubs, but losing Caratini hurt, especially when you look at how many different backup catchers the Cubs used in 2021. The Davies portion of that trade was a complete failure as he went on to have his worst season as a pro and will now try and latch onto another team. The main part of that deal is yet to be determined as the Cubs received four high-level prospects from the Padres.

Reggie Preciado and Owen Caissie appear to be the cream of the crop among those prospects, but the other two also have solid futures and should not be overlooked. The one name that everyone was the most excited about was Yeison Santana, but he hasn't lived up to his billing quite yet. At 21 years old, the 2017 International Free Agent pickup was the oldest among the prospects and had one of the highest upsides. He was a top 15 prospect in the Padres system and was No. 17 with the Cubs until late in the season when he fell out of the top 30.

Santana was one of 15 players signed by the Padres during the International period that summer and signed for close to 300,000. A natural shortstop by trade, Santana quickly rose to the Padres most promising prospect, which is why the Cubs wanted him included in that deal. Although extremely raw at the plate at this stage in his career, Santana has shown plenty of potential and projects to be an outstanding hitter when all is said and done.

One year after being drafted, the Padres sent him to the Dominican Summer League, where he showed plenty of promise. Across 36 games that summer, Santana hit .258 with no homers and 25 RBIs, but logged one double and five triples. Perhaps the most significant thing to take away from that season was his 33BB/30K which is unheard of for a teenager of any skillset. That performance saw Santana earn a mini promotion where he was sent stateside to play in the Arizona League for the 2019 season.

Unlike the Dominican League, where he saw some minor struggles, Santana started to make a name for himself during a 41 game stretch that season. Not only did he see his average rise to .346, but with three homers and 30 RBIs, Santana showed everyone that there was some power in that bat, even if limited for this stage in his career. His patience also continued to be impressive, taking 23 walks and striking out 38 times.

That season alone landed him in the Padres top 30 prospect list, and heading into 2020, he had some of the biggest upside of anyone in the system. Then came COVID, as his 2020 season was wiped away despite seeing some action in the fall Instructional League. That was followed by a trade to the Cubs as his days with San Diego were over, and a new chapter was set to begin. Hoping for even better in 2021, the Cubs sent him to Myrtle Beach to start the season, where he endured his share of struggles.

In 20 games with the Pelicans, Santana hit just a .147 with no homers and one RBI. He also took nine walks and struck out 28 times as his year off affected him. Instead of watching him struggle, the Cubs sent him back to the ACL, where he looked much better the second half of the season. In 32 games with the ACL Cubs, Santana started to look like the player of old, hitting .292 with one homer and 15 RBIs.

Santana is a selective hitter, but he is a aggressive hitter, advanced for players his age. Although the power numbers haven't shown up, make a mistake in the zone, and he has proven he can do damage with those pitches. That is all you can ask for from a young player. He has a knack for producing elite bat speed, patience, and using the barrel to make solid contact that gives the Cubs hope that more power will follow. Add in his incredible knowledge of the strike zone, and Santana will continue to be a difficult man to strike out.

In the field, Santana is a great defensive player and has all the makings of an everyday shortstop in this league. He is athletic with smooth reactions and possesses an above-average and accurate throwing arm. Santana also has the confidence that makes him believe he can make all the plays, which is crucial for that position. He may not have had the year that Preciado and Caissie had in 2021, but he is still a vital piece to the Cubs future.