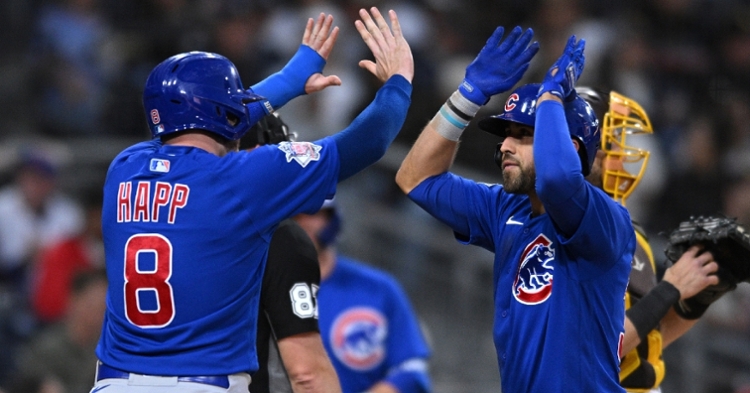 SAN DIEGO - It is hard to believe that this Chicago Cubs (11-19) was once 6-4 on the season and in first place in the NL Central. That was a long time ago, and to show you how bad things have gotten, this team hasn't won a series since early in the year.

Looking to change that against the San Diego Padres (20-12) at Petco Park on Wednesday, Cubs fans were pleasantly surprised as Keegan Thompson made his first start of the season. You could argue that Thompson has been their best pitcher this season, especially when you look at his work out of the pen.

Although he only lasted four innings, Thompson continued to do what he has done all season, allowing just two runs on five hits in those innings. That was a much better line than Padres starter Nick Martinez who was charged with five runs despite striking out eight hitters in four innings.

Like most of this series, the Cubs and Padres were locked into a back, and forth battle that saw the Cubs grab the lead late and then hold on for the 7-5 win and series victory. One of the hottest hitters on the planet right now is Willson Contreras, and he continued that by going the opposite way for his 99th career homer and 1-0 lead. That marked the 14th opposite-field hit for Contreras, which leads the team.

The bottom of the first saw a strange yet scary moment for the Cubs as Jurickson Profar connected for the one-out triple, setting himself up in a good spot. On that play, Nico Hoerner collided with an umpire in the outfield and was eventually lifted from the game in favor of Ilderamo Vargas.

Following a walk to Manny Machado, Eric Hosmer came through with an RBI single up the middle before Thompson induced an inning-ending double play. Later, one inning saw the Padres grab the lead with Luke Voit taking Thompson deep to put San Diego on top 2-1.

Going on three innings without a run scored, the Cubs used the next two innings to catch fire and eventually chased Martinez in the process. Contreras was in the middle of that again, leading off the fourth inning with a walk and advancing to second on a wild pitch. That proved extremely costly for Martinez as Patrick Wisdom tied things up with an RBI single.

Following another walk to Alfonso Rivas, Frank Schwindel came through with one of his biggest hits of the season as his RBI double put the Cubs back in front 4-2. Schwindel would come around to score on the Jason Heyward RBI single as the Cubs capped off a four-run fourth by leading 5-2.

Thompson may not have qualified for the win, but his outing continued to show the Cubs and their fans that he has a future in the rotation as Chris Martin and the bullpen took over in the fifth. Scott Effross was on to pitch the sixth, and, despite struggling a little bit, he limited the damage with the Cubs still leading 5-3 at that point.

Effross was followed by Mychal Givens, who was looking to get into a groove after not being used much the past week. What started with a strikeout to Machado turned sour quick as Givens allowed a Hosmer homer to pull the Padres within 5-4. Two batters later, the long ball was still an issue, with Voit going deep for the second time in the game, bringing things back to even 5-5.

In the eighth inning, the Cubs put the game away for good as Luis Garcia was now on the bump for San Diego. Contreras continued to see the ball like a beach ball as he led the inning off with a single. Two batters later saw the Cubs with the bases loaded as Ian Happ worked a walk with Wisdom following suit with a single.

Looking to cash in their golden opportunity, Rivas continued to come through in front of his hometown fans as his RBI single kept the line moving and gave the Cubs a 7-5 lead. The Cubs could have gotten more out of that inning, but a double play off the bat of Vargas killed that rally and ended the threat with the Cubs in front 7-5.

With David Robertson currently on the IL, Rowan Wick will handle the closer duties as he was called on for the six-out save. Despite dealing with traffic in the eighth, Wick made the pitches needed to escape the jam and then returned to pitch the ninth.

A lead-off single off the bat of Hosmer had the Padres in business, but once again, Wick would get out of the inning without allowing a run, securing his second save of the season in the 7-5 win. The Cubs had nine hits as three players finished with two hits. Despite a slow start, Rafael Ortega delivered two hits as his average has crept up to .234. Wisdom and Contreras also had multi-hit efforts as Contreras has seen his average skyrocket to .304.

Top Keegan Thompson News
Top Chicago Sports News of the Week
Partner of ChicagoBearsHQ.com, ChicagoBullsHQ.com, CubsHQ.com, and TigerNet.com
ChicagoSportsHQ is an independent site and is not affiliated in any way with Chicago Professional Sports Teams.