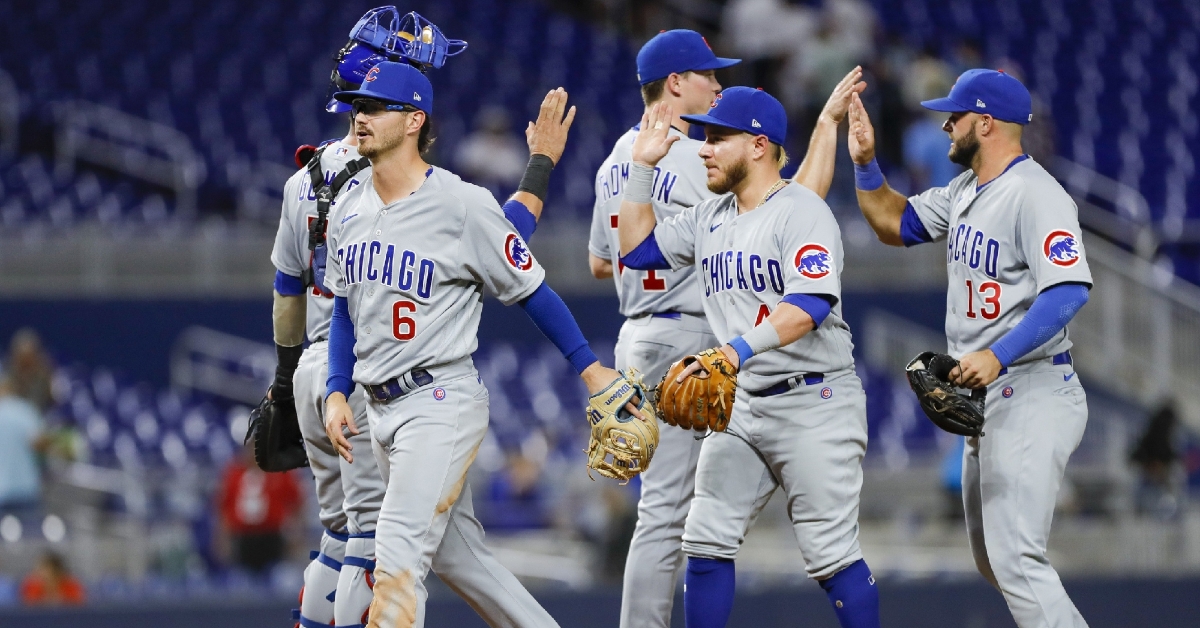 MIAMI - One thing fans have fallen in love with when it comes to David Ross and this year's Chicago Cubs (64-85) team is that they have no quit. Even while trailing the Miami Marlins (61-89) late in the game at Loan Depot Park and using a patchwork lineup to cover up the injuries this team has, the Cubs never gave up and continued to fight until the final out.

With Marcus Stroman and Keegan Thompson giving the Cubs nine strong innings with two walks and 13 strikeouts, the offense had to pick up the slack late as a three-run eighth inning led them to a 4-3 comeback win. That win was significant because the Cubs were doing something not many teams do: winning with small ball.

Facing Jesus Luzardo for the second time this season, the Cubs had a rough night offensively against him as he surrendered just one run on three hits in 6 2/3. What stood out, even more was just how dominant those innings were as he walked one and struck out 11. Fortunately for the Cubs, they had their road warrior on the mound as Stroman took the ball.

Looking to improve on his MLB-best 1.84 ERA away from Wrigley Field, Stroman got off to a strong start of his own before faltering in the fifth. In that inning, he allowed two homers, but that was all the offense the Marlins would have as they scratched across three runs on five hits off Stroman. He walked one and punched out seven before yielding to Thompson for the final three innings.

Expecting runs to be an issue all game, Luzardo made a statement early as he worked around a first-inning single to punchout the side. That was the only hit he would allow for quite some time, as Stroman was able to match him before allowing his first hit of the game in the third. It wasn't until the PJ Higgins double in the fifth that the Cubs tally another hit, but they usually left him stranded on the bases.

Once the Marlins got their first hit off of Stroman, it seemed like the contact was coming more frequently as they began to swing away in the fifth. With Bryan De La Cruz leading things off with a ground-rule double, Nick Fortes put Miami in front 2-0 as he went the opposite way for the game's first runs. Two batters later and the long ball victimized Stroman as Lewin Diaz went the opposite way to extend the lead to 3-0.

Stroman would finish off the fifth before taking care of business in the sixth, but the Cubs were in trouble when you look at how Luzardo was pitching. It is amazing what one hit can do for a team in terms of momentum, and with one swing in the seventh, Patrick Wisdom put the Cubs on the board as the solo homer was the jolt this offense needed.

Now on the board, Ross went to the pen where Thompson was called upon for his first action since coming off the IL. Like he was earlier in the season, Thompson was near perfect in relief, and the Marlins had no answers for him as he struck out six batters in three innings. Given the situation the Cubs lineup is in right now with the injuries, you have seen Ross play a lot more small ball, and it has worked out in his favor.

That was the case once again on Wednesday as Zach McKinstry, and Christopher Morel led off the eighth with a pair of walks to put the Cubs in business. Another perfect bunt from Esteban Quiroz not only moved the runners up 90 feet, but resulted in an error by the new pitcher Steven Okert as the Cubs were within 3-2. Not only that, but both remaining runners moved up 90 feet which were huge for this team.

That error was followed by a David Bote fielder's choice to tie the game up as Morel just slid in front of the tag at home. The next batter was Happ, and he too continued to play the small ball game as a sacrifice fly brought home the go-ahead run with the Cubs leading 4-3. Still holding that lead in the ninth, it was up to Thompson to keep it there as he was back out for his third inning of work.

Despite allowing a two-out double to Fortes, Thompson was filthy as he struck out the side to cap off his six strikeout evening and pushed the Cubs back into the win column 4-3. The Cubs had four hits in the game, but that is all they needed as Higgins, Happ, McKinstry, and Wisdom had those hits.