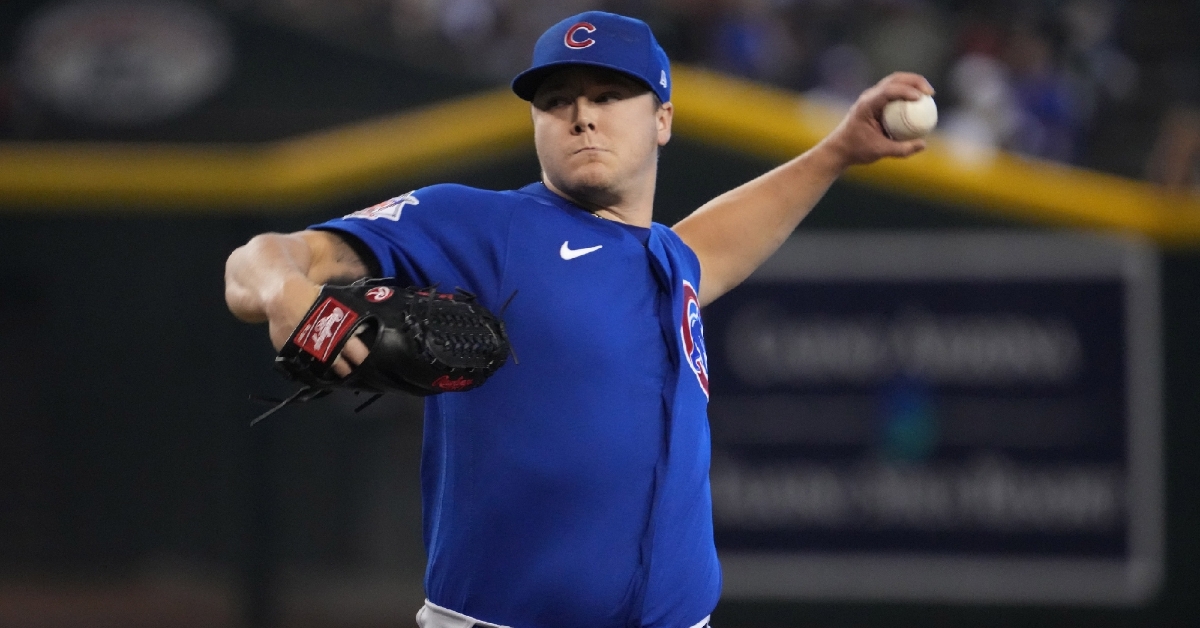 PHOENIX - After not winning a single series in over a month, the Chicago Cubs (13-20) had a great week going 4-2 and winning both series they played. The goal in baseball is to win a series, but to do that on the West Coast is a credit to how these guys played all week.

Justin Steele was returning to the mound to face the Arizona Diamondbacks (18-17) after missing two starts with a thumb injury as the Cubs rotation is slowly getting back to full strength. Despite coming away with a no-decision, Steele had a career day on the mound giving the Cubs six innings of two-run ball with only one run earned. He walked two, allowed three hits, but most importantly struck out double figures for the first time in his career, finishing with 10Ks.

The Cubs would need that kind of effort from him as the Diamondbacks have one of the best pitching staffs in the game. Humberto Castellanos opposed Steele, and despite going 5 1/3 innings, he was equally as challenging. Castellanos allowed two runs on five hits to go with five punchouts before it became a battle of the bullpens. Like the night before, the Cubs were able to capitalize in the ninth as the Frank Schwindel RBI single proved to be the difference in a 3-2 Cubs win.

One thing the Cubs did early in the season was score first, translating into more wins. They have done that more on this road trip, and oddly enough, more wins came from it. Rafael Ortega gave the Cubs the quick start they were hoping for as he led off the game with his first homer of the season for an early 1-0 lead.

Looking to answer in the bottom half of the first, Cooper Hummell led things off with his second triple of the series, only to be stranded at third to end the inning. Give Steele a ton of credit for working out of that jam as he set the tone from the start. Following that, Patrick Wisdom led the second inning off with his sixth homer to give the Cubs a 2-0 lead.

Singles from Schwindel and Ilderamo Vargas came later in the inning, but the Cubs were unable to come through with any more runs. That would prove costly for some time as the Cubs offense completely stalled out for seven innings. Despite that, Steele struck out five of the next six hitters he faced and had the Diamondbacks guessing.

His luck was starting to run out in the fourth inning as a leadoff walk to Jordan Luplow got things started before a Christian Walker single put a pair of runners on base. With two-down and on the verge of getting out of another jam, Daulton Varsho put the Diamondbacks on the board as his RBI single made it a 2-1 game. An error to the next hitter brought home another run, and just like that, the game was tied 2-2.

That was as tough as things would get for Steele as he managed to pitch the next two innings without damage getting through six innings for the first time this season. Despite the Cubs offense going cold after the second inning, it didn't come without traffic as the Cubs had plenty of chances to cash in.

Give the Diamondbacks plenty of credit as they made the pitches they needed to make to keep things tied. A leadoff double from Jonathan Villar in the seventh was a prime example of that as the Cubs were unable to bring him home. Following Steele and his outing, it was time for the Cubs to go to their pen with Chris Martin and Scott Effress the first two out.

Like both of them have done this season, both threw scoreless innings as the game went to the ninth tied 2-2. After the Mark Melancon meltdown on Saturday, the Diamondbacks went to Ian Kennedy on Sunday as he was called on to pitch the ninth.

The Cubs couldn't have asked for a better start to this inning as Wisdom opened things up with a leadoff double and then came around to score on the Schwindel flare to right to take a 3-2 lead. Schwindel would reach second later in that inning, but was left stranded there as the Cubs were three outs away from taking another series.

With Walker ripping a single off Effross to being the ninth, it was time for Rowan Wick to enter the game as he continues to fill in for David Robertson. Wick's outing didn't come without drama allowing a single to Pavin Smith, which put two runners on with no outs. After getting Varsho to pop up for the first out, Wick made the pitch he needed to make as he induced an inning-ending double play to finish off the Diamondbacks for the 3-2 win.

Wisdom and Schwindel led the way on offense as they picked up two hits with an RBI. Ortega, Seiya Suzuki, Villar, and Vargas added the rest of the hits as the Cubs picked up eight hits. Effross secured the win in relief and dropped his ERA to 1.05, while Wick picked up his fourth save and third on the trip.