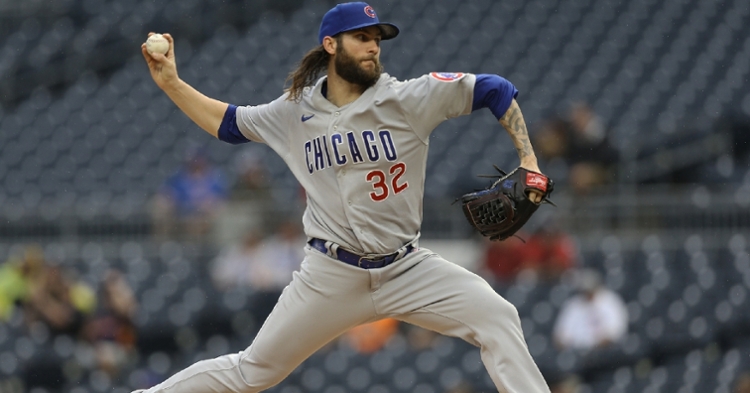 PITTSBURGH — After five seasons of wearing a Pittsburgh Pirates (18-30) uniform, Trevor Williams joined the Chicago Cubs (26-22) in the offseason. His struggling in his first two starts of the year against his former club, Williams pitched six innings of one-run ball on Wednesday. He struck out seven and earned the winning decision, with the Cubs controlling the action most of the way and winning 4-1 at PNC Park. The start of the game was delayed by approximately a half-hour due to rain.

Ben Gamel tripled off Williams with one out in the first but was left stranded. After getting called up earlier in the day, Rafael Ortega walked to begin the second inning, and David Bote then took Wil Crowe deep with a two-run homer that carried 413 feet out to straightaway center. After Eric Sogard singled, Williams came through with a base hit. Later in the frame, Sogard scored from third on an RBI single by Kris Bryant, which brought former Cub Duane Underwood Jr. in to pitch.

This is Kris Bryant's 57th hit at PNC Park, his most at any road ballpark.#CubTogether pic.twitter.com/hZqCjpGiJE

Underwood tossed 3 2/3 scoreless innings of relief, but Williams continued to flourish on the bump, preventing the Pirates from cutting into their deficit. Sogard doubled off Chris Stratton in the sixth, and Williams followed that up with his second single of the night. With two outs, Bryant hit and RBI base knock that once again plated Sogard from third. Kevin Newman led off the bottom half of the inning with a double and scored on an ensuing RBI single off the bat of Erik Gonzalez.

Tommy Nance relieved Williams between innings and pitched a scoreless seventh. Bote was walked by Chasen Shreve at the start of the eighth but was thrown out from behind the plate by Kevin Stallings while attempting to steal second. Sogard struck out right before Bote was gunned down, making it a "strike 'em out, throw 'em out" double play. Earlier in the game, Bryant, who started at first in place of a banged-up Anthony Rizzo, teamed up with Javier Baez for a nice 3-6-3 double play.

Dan Winkler and Andrew Chafin combined to keep the score at 4-1 in the bottom of the eighth, and Craig Kimbrel worked around a leadoff double by Gamel in the bottom of the ninth. Interestingly, Kimbrel intentionally balked with two outs for the first balk of his career in the frame, allowing Gamel to reach third. The balk was likely strategic and intended to prevent sign stealing in a game that was all but over. Kimbrel proceeded to tab a game-ending strikeout shortly thereafter, wrapping up the Cubs' 4-1 victory and moving into 11th place on the all-time saves list.

With tonight's save, Craig Kimbrel passed Troy Percival for 11th on the all-time saves list!#CubTogether pic.twitter.com/9AmTQOkk13

Top Trevor Williams News
Top Chicago Sports News of the Week
Partner of ChicagoBearsHQ.com, ChicagoBullsHQ.com, CubsHQ.com, and TigerNet.com
ChicagoSportsHQ is an independent site and is not affiliated in any way with Chicago Professional Sports Teams.