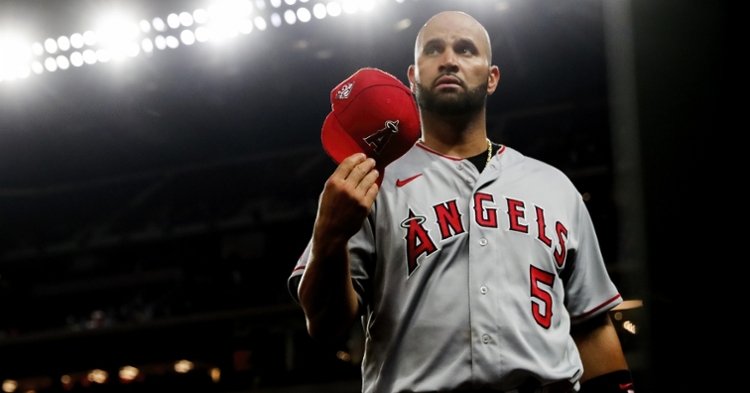 ANAHEIM, CA – The Angels announced today that the Club has designated INF/DH Albert Pujols for assignment.

“The Angels Organization proudly signed Albert Pujols in 2011, and are honored that he has worn an Angels jersey for nearly half of his Hall-of-Fame Career. Albert’s historical accomplishments, both on and off the field, serve as an inspiration to athletes everywhere, and his actions define what it means to be a true Superstar. Since his Rookie of the Year Season in 2001, Albert and his wife Deidre have generously given their time and resources to countless charities throughout the world. We are thankful to the entire Pujols Family,” said Angels owner Arte Moreno.

Some of Pujols most historic moments have come during his decade with the Halos. The future Hall of Famer connected for both his 500th and 600th career home runs donning an Angels uniform, becoming just the ninth member of the 600-home run Club. On May 4th, 2018, he reached the prestigious 3,000-hit plateau and joined Hank Aaron as the only players ever to amass 3,000 hits, 600 home runs and 600 doubles. In 1,181 career games with the Angels, Pujols tallied 1,180 hits, 214 doubles, 222 home runs and 783 RBI. He leaves the franchise tied for fourth in home runs, fifth in RBI, and ninth in hits.

The #Angels announced today that the Club has designated Albert Pujols for assignment. pic.twitter.com/SCRz78kXcf

According to source, #Angels slugger Albert Pujols was upset that he wasn't in lineup to face #Rays bulk LHP Ryan Yarbrough last night, and that the decision to bench him came from front office, not MGR Joe Maddon. Pujols was 6 for 9 with 2 HR, 2 2Bs, 7 RBIs vs. Yarbough.