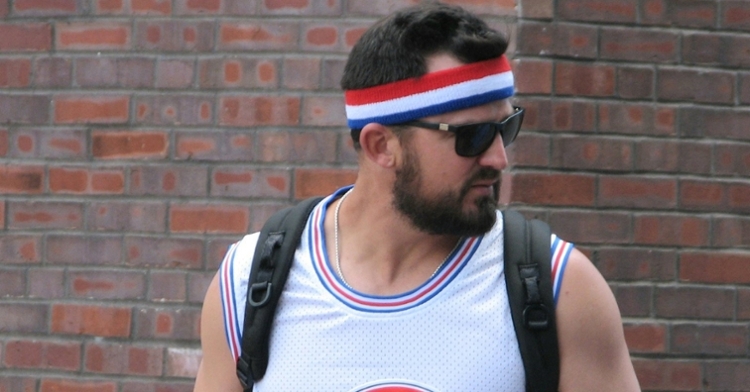 Rex Brothers went all out with his "Space Jam" attire, which even included a retro headband. (Credit: @sambernero on Twitter)

CHICAGO — Themed road trips have been a staple for the Chicago Cubs in recent seasons, as members of the club often wear outfits that tie in with certain themes prior to leaving the Windy City for an extended period of time. On Tuesday, the Cubs arrived at Wrigley Field sporting colorful get-ups in honor of the "Space Jam" movie franchise.

"Space Jam: A New Legacy," the sequel to the 1996 classic "Space Jam," is set to premiere in theaters on July 16, 2021, which might explain the Cubs' latest road trip theme. Following Tuesday's game against the Cleveland Indians, the Cubs will embark on a 10-game road trip that, beginning on Thursday, will feature 10 games in 11 days.

Starting pitcher Adbert Alzolay, third baseman David Bote, reliever Rex Brothers and manager David Ross were all photographed paying homage to Michael Jordan, Bugs Bunny and the rest of the Tune Squad. Brothers upped the ante by rocking a headband. Perhaps the vibrant threads will translate to flashy performances on the field throughout the road trip.