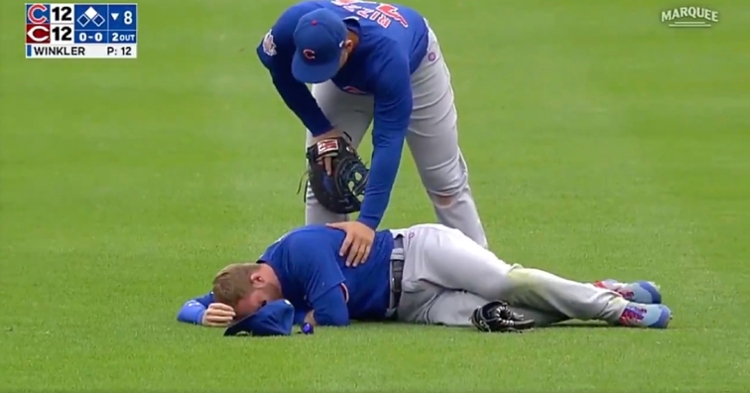 In a cruel turn of events, Ian Happ was forced to exit Sunday's game in the half-inning that followed his game-tying home run.

CINCINNATI — In the half-inning that followed him hitting a clutch game-tying home run with two outs on Sunday, Chicago Cubs center fielder Ian Happ was carted off the field at Great American Ball Park after colliding with second baseman Nico Hoerner in the field. Happ appeared to get kneed in the side by Hoerner as the two pursued a popup. He also suffered a bloody nose by sliding into Hoerner's right forearm.

Happ tied the Cincinnati Reds at 12-12 with a three-run jack in the top of the eighth. Then, in the bottom of the eighth, catcher Tyler Stephenson popped up behind second base. A charging Happ tried to dive out of the way but took a knee to the right side from Hoerner, who was fixated on the baseball and understandably not able to avoid colliding with Happ. After lying on the ground in pain, a visibly ailing Happ was eventually able to get to his feet and was carted off the field. For what it is worth, Hoerner made a great catch of the pop fly and was able to remain in the game.

Knee to the face? pic.twitter.com/0MuDJ8Nk23