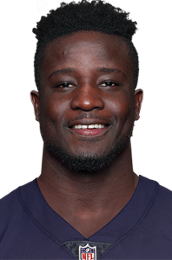 Played in 13 games with five starts
Recorded his most sacks since his 2015 campaign with 5.0; added 29 combined tackles, six tackles for loss, eight QB hits and one forced fumble while appearing in 13 games

Attaochu saw action in four contests with the Chargers, collecting six tackles (5 solo) during the season.

Selected by San Diego in the second round (50th overall) of the 2014 NFL Draft, Attaochu competed in 11 games as a rookie
Contributed eight tackles (6 solo) and two sacks (13 yds.) with one forced fumble as a rookie
Recorded three solo tackles, one sack (4 yds.) and one special-teams tackle in his NFL debut at Arizona (9/8)
Tallied two solo tackles and one sack (9 yds.) vs. Oak. (11/16)