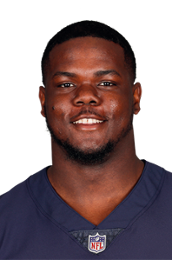 Finished his third NFL season in 2020 after being drafted in the fifth round (145th overall) in the 2018 draft
Has appeared in 43 games with 34 starts, recording 95 tackles, 8.0 sacks, 22 QBH and 1 INT
Appeared as a reserve in 2018 Wild Card playoff game vs. the Eagles and started in the 2020 Wild Card game at the Saints, recording seven tackles

Started every game along the defensive line for the first time in his career; finished second on the team with 5.0 sacks and 13 QBHs
Recorded a career-high seven total tackles, 1.0 sack (two half sacks) for minus-7.5 yards and a career-high three QBHs in the Week 15 win at the Vikings
Matched his season best four tackles in Week 10 vs. Minnesota
Recorded another four tackles, 1.0 sack and his his first career INT in Week 13 vs. the Lions
Recorded his fourth sack of the season the very next week in the win over the Titans
Recorded one TFL for minus-3 yards in Week 2 vs. the Giants
Recorded three tackles in Week 4 vs. Colts; also had 3 tackles and a QBH in Week 7 at the Rams
Recorded his first sack of the season in Week 6 at Carolina, sacking Teddy Bridgewater inside the 1-yard line
Posted his second sack of the season in Week 9 at Tennessee

Appeared in 13 games with 12 starts, recording 27 tackles, one fumble recovery and one TFL