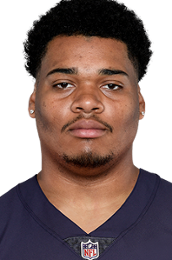 A fifth-year offensive lineman who has appeared in 45 games (26 starts), all with Denver from 2017-20 while also spending time competing on the club's practice squad
Appeared in 15 games, making 12 starts at right tackle in 2019 and seven starts in 2020
Played 12 games for Denver in 2018, starting the final seven contests at right guard

Played in nine games with seven starts at right tackle; also saw time as a reserve in Weeks 12-13 at NO and vs. Kansas City

Wilkinson played 12 games and started the final seven contests at right guard
Made his regular-season debut playing eight snaps at left tackle at NYJ (10/7)
Entered the game at right guard and played 40 snaps vs. Houston (11/4)
Made his first NFL start at right guard at LAC (11/18)

Wilkinson, who entered the NFL as a college free agent with Denver on May 12, played nine games as a rookie
Competed on Denver's practice squad for the first six weeks of the season before being signed to the active roster on Oct. 21