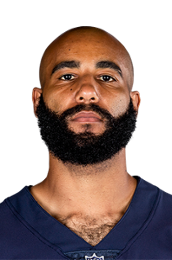 Completed his fifth NFL season in 2020; has appeared in 64 career games for the Bears, including two postseason contests
Has 32 special teams tackles, two forced fumbles and one fumble recovery in his career

Played in all 16 games on special teams and as a reserve in the defensive backfield; recorded eight tackles on defense and eight on special teams
Recovered a fumble on punt coverage deep in Packers territory in Week 17, leading to a Bears field goal
Recorded his first career INT late in the fourth quarter to seal the Week 6 victory at Carolina
Broke up the pass on the final play to help secure the Week 5 win over the Buccaneers; also had two tackles in that game

Appeared in 13 games as a reserve, recording four tackles and adds six tackles and one fumble recovery on special teams
Recorded one special team tackle in Wild Card playoff game vs. Philadelphia (1/6/19)

Appeared in 11 games after being promoted from practice squad on 9/19; inactive for games 11-13
Recorded 10 special teams tackles