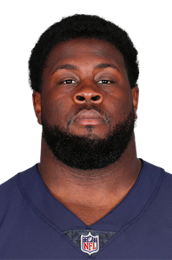 Voted a Pro Bowl alternate; started 15 games, recording 29 tackles, one sack and two TFLs
Recorded 1.0 sack on Eagles QB Carson Wentz in Week 9 at Philadelphia
Also had one TFL in a Thanksgiving Day win at the Lions

Started 16 games, recording 39 tackles, 3.0 sacks, five tackles for loss and one fumble recovery
Forced a safety by sacking Rams QB Jared Goff in the end zone in a Week 14 home win over the Rams on Sunday Night Football
Also recorded sacks on Seattle's Russell Wilson and Minnesota's Kirk Cousins in Weeks 2 and 17, respectively
Added four tackles and one tackle for loss in Wild Card playoff game vs. PHI (1/6/19)

Started 15 games, recording 44 tackles, 1.5 sacks, 1 fumble recovery and 3 TFLs
Recorded his first sack of the season in Week 2 at Tampa Bay; also had a half sack in a Week 7 win over the Panthers

Limited because of injury to six games with five starts, recording 24 tackles, 2.5 sacks, 2 TFLs and 1 pass breakup
Recorded a half sack in the opener at Houston while also picking up sacks in Week 10 at Tampa Bay and Week 14 at Detroit