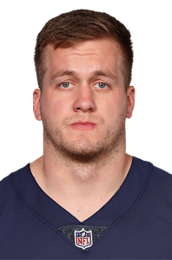 Has played in 31 career games with eight starts; has caught seven passes for 91 yards

Played in all 16 games with one start; started and lined up at fullback in the Week 1 win at Detroit
Saw action as a reserve and on special teams in every other game this season; recorded four special teams tackles, including two vs. Detroit in Week 13

Appeared in one game as a reserve for the Washington Redskins before being waived, then claimed by the Bears, inactive for Week 2
Appeared in 14 games (seven starts) for the Bears, catching seven passes for 91 yards
Caught a season-high three passes for 56 yards, including a 30-yarder, in the Week 14 win over the Cowboys