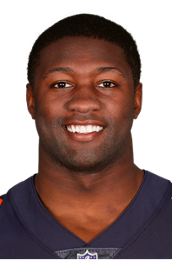 Finished his third NFL season in 2020 after being drafted in the first round (8th overall) in the 2018 draft
Has appeared in 44 career games (42 starts), totaling 361 tackles, 14 PDs, 4 INTs, 11.0 sacks and 31 TFLs
Has now recorded 100+ tackles in each of his first three seasons, becoming the first Chicago defender to have three straight seasons of 100-plus tackles, since Lance Briggs did so for six seasons (2004-2009)
His 139 tackles in 2020 ranked 4th most by a Bears defender in a season, since tackles were an official stat
His 107 tackles in 2018 ranked second all-time among Bears rookies
Recorded a sack on his first ever NFL snap in Week 1 of 2018 at Green Bay
Recorded seven tackles and an interception in Wild Card playoff game vs. PHI (1/6/19), making him just the sixth rookie in Bears history to record an interception in a postseason game
Has 17 career 10+ tackle games, the third most in Bears history since 1987

Finished second in the NFL with 98 solo tackles; and sixth in combined tackles (139) and was second in the NFL with 18 TFL, only behind T.J. Watt (23)
Finished the season as the only NFL defender to record over 100 tackles, 10 tackles for loss and have at least two sacks and interceptions. These totals have only been accomplished three times now since 2015.
Intercepted two passes in Week 16, becoming the first Chicago linebacker to have a multi-interception game since Lance Briggs in 2008; additionally, he is one of 15 defenders and the only LB to have a multi-interception game in 2020
Matched a career best two sacks in the Week 14 win vs. Houston; finished with 12 tackles and two sacks
Logged a season-high 14 tackles, matched a career-high with three TFL and added one sack in Week 10 vs. Minnesota
Logged a team-high 11 tackles vs. New Orleans and again the very next week at the Titans
Tallied 13 tackles (11 solo) and a career-high 3 TFL in Week 4 vs. the Colts
Had 12 tackles, one TFL and one PD in the Week 6 win at Carolina
Recorded seven tackles, including five solo and one TFL, in the Week 1 win in Detroit
Had eight tackles (seven solo) and one TFL in the Week 2 win over the Giants

Started 12 games in which he played, recording 100 tackles, two pass defenses, two sacks, one interception and five TFLs
Recorded career-highs with 16 tackles and 2.0 sacks on Thanksgiving at DET, joining Vinny Rey and Patrick Willis as the only platers to have 15+ tackles and two more sacks in a game since 1982
Recorded five double-digit tackle games
Intercepted Rams QB Jared Goff in Week 11
inactive for Week 4 vs. MIN; placed on Injured Reserve on 12/9

Appeared in 16 games (14 starts), recording team-high 122 tackles (two shy of the Bears rookie record), four passes defensed, one interception, five sacks and eight tackles-for-loss
Recorded a sack on his first ever NFL snap at GB
Recorded a season-high 13 tackles at Miami (10/14); tied that season-high at Buffalo (11/4)
107 tackles is second all-time among Bears rookies
Recorded seven tackles and an interception in Wild Card playoff game vs. PHI (1/6/19), making him just the sixth rookie in Bears history to record an interception in a postseason game