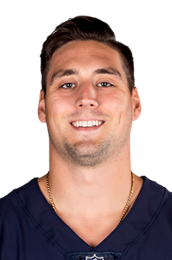 Running Back
B I O
PRO CAREER:

Finished his third NFL season in 2020 with the Bears; has played in 24 total games

Played in all 16 games, primarily on special teams; recorded eight catches for 67 yards and a score
Scored his first career touchdown in Week 9 at the Titans on a 6-yard pass from Nick Foles; also posted career highs with four catches for 35 yards in that game