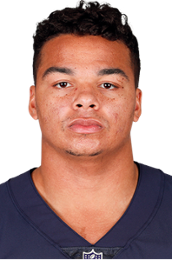 Has played in nine career games with seven starts at center in 2020
Spent his 2019 rookie season on the practice squad; elevated to the active roster in 2020 prior to Week 6 at the Panthers

Played in nine games with seven starts at center; received his first career start at center in the Week 8 overtime loss to the Saints; also started at center in the Wild Card playoff game at the Saints
Helped pave the way for the Bears to rush for a season-high 199 yards and two rushing scores in the Week 15 win at Minnesota
Helped the Bears rush for 140 yards and three rushing scores in Week 13 vs. Detroit and 169 yards and a score vs. Houston in Week 14
Spent Weeks 1-5 on the practice squad; called up to the active roster in Week 6
Played in a reserve roll at center for the injured Cody Whitehair in Week 7 at the Rams
Inactive with a knee injury for Weeks 9-10; came back Week 12 at Green Bay where he started once again at center