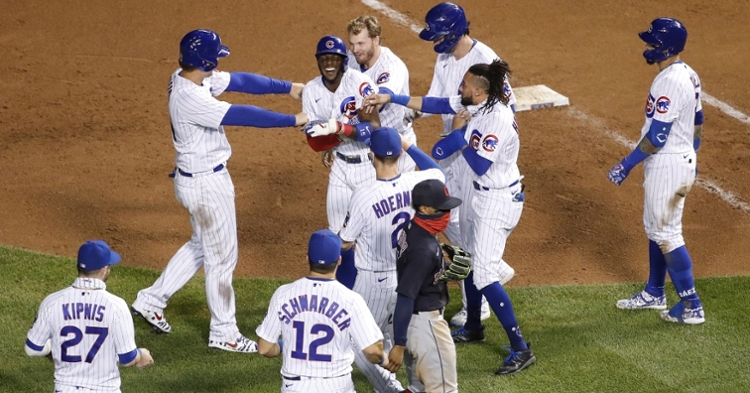 The one pitch that Cameron Maybin faced all night resulted in a hit by pitch that forced home the winning run. (Credit: Kamil Krzaczynski-USA TODAY Sports)

CHICAGO — Fitting with the recent theme of the Chicago Cubs (29-20) winning in dramatic fashion, the North Siders defeated the Cleveland Indians (26-22) via a walkoff hit by pitch on Tuesday. The opener of the two-game series at Wrigley Field saw the Indians tie the game at 5-5 via a clutch two-run homer in the top of the ninth, only to lose due to back-to-back HBPs in the bottom half of the same inning.

Yu Darvish started on the mound for the Cubs in the 6-5 victory and gave up three runs in a seven-inning outing, in which he struck out seven, walked one and was taken for nine hits. At the plate for Chicago, Anthony Rizzo went 3-for-4 and tabbed an RBI. He also tallied a clutch single that advanced the winning run into scoring position prior to the consecutive hit by pitches.

T1: Darvish used just 10 pitches in a quick top of the first.

B1: Carlos Carrasco started on the bump for the Indians. His first time out, he plunked Rizzo with a pitch but did not give up any runs.

T2: Tyler Naquin smacked a single to center but was left stranded.

B2: With a towering moonshot, Javier Baez lifted a 450-foot solo bomb out to center field.

T3: Josh Naylor led off with a double, and an ensuing throwing error committed by third baseman Kris Bryant scored him. Bryant fielded a bunt off the bat of Delino DeShields Jr. and made an errant throw to first. Naylor came home, and DeShields made it all the way to third. Francisco Lindor followed that with an RBI double. After advancing to third on a groundout, Lindor was gunned down at the plate by right fielder Jason Heyward when attempting to score on a flyout, thus ending the half-inning.

B3: Three groundouts made up an uneventful bottom of the third.

T4: A two-out single was all that the Indians mustered at the plate in the fourth.

B4: Willson Contreras hit a leadoff base knock, and Heyward walked with two outs. Playing against his former team, Jason Kipnis flied out to end the frame.

T5: DeShields doubled and came home on a Lindor single. Lindor went on to steal second with two away before Jose Ramirez grounded out.

That makes 2 runs batted in tonight for Frankie! #OurTribe pic.twitter.com/nAwcUcsp68

B5: Happ hit a one-out double and crossed the plate on an ensuing single by Bryant, who took second on the throw home. Rizzo clubbed an RBI double after that and reached third on a base hit by Contreras. Contreras was thrown out at second when attempting to stretch the single into a double, and Kyle Schwarber then flied out.

T6: Naquin, who finished the contest 4-for-4, remained hot with a two-out double but did not score. Prior to that, Rizzo made an amazing catch in foul territory after covering a lot of ground to reach the popup.

B6: Kipnis hustled to first on an infield single in a scoreless bottom half of the sixth.

T7: DeShields doubled off Darvish with one out. After Lindor was intentionally walked, former Cub Mike Freeman beat out a throw to first to prevent a potential double play from coming to fruition. Darvish kept the game tied by forcing Ramirez to hit an inning-ending lineout.

B7: Happ's leadoff single led to Happ getting thrown out on a steal attempt. The Cubs still managed to take the lead in the seventh, though. Bryant singled and reached third on a Rizzo base knock. Contreras brought Bryant home with a sacrifice fly before Schwarber struck out to usher in the eighth frame.

T8: With Rowan Wick pitching, a 6-4-3 double play followed a leadoff walk. Naquin singled with two outs, and Sandy Leon, who pinch hit for Roberto Perez, then struck out.

B8: Leon replacing Perez behind the plate proved critical, as Leon committed a crucial throwing error on a Baez steal attempt. Perez, who threw out Happ on his aforementioned steal attempt, is widely regarded as one of the best backstops in the league at throwing out base stealers, making Leon's substitution seem consequential when Baez made it all the way from first to home on one play. Leon's throw to second sailed into the outfield, and Baez scooted to third, where he was sent home by third base coach Will Venable. The throw to the plate was off the mark, and Baez slid across the dish safely.

Sunday: Javy scores from 2nd on a sac fly to left.

T9: Jeremy Jeffress blew the save in the top of the ninth. A few at-bats after walking Naylor, Jeffress was taken deep by Lindor, who jacked a 366-footer to left. The opposite-field two-run blast was followed by a walk of Freeman, but the Cubs then escaped the half-inning via a 4-6-3 double play.

B9: Oliver Perez entered to pitch the ninth for the Tribe, and he walked Bryant with one out. Rizzo nearly hit a walkoff home run in the next at-bat, lining a foul ball near the pole in right field. He ended up singling up the middle, placing runners on the corners. Nick Wittgren relieved Perez at that point and never settled into a rhythm, nearly hitting Contreras in the head with a pitch before beaning him in the hand with another one. Contreras was irked with Wittgren after getting plunked, but Wittgren clearly hit him unintentionally, as proven by the HBP dished out on the very next pitch. With the bases loaded, Cameron Maybin stepped into the batter's box as a pinch hitter and was dinged in the side, forcing Bryant across and gifting the Cubs a walkoff triumph by way of the fourth hit by pitch drawn by the North Siders on the evening.

Despite blowing his second save, Jeffress earned the winning decision, making him 4-1. Perez fell to 1-1 with the losing decision, and Wick earned his fifth hold. The string of recent dramatic Cubs victories includes a ninth-inning comeback on Saturday, a no-hitter on Sunday and Tuesday's walkoff. Chicago has now won 4-of-5 and sits five games atop the National League Central.

Up Next: The Cubs, who have won all three of their matchups with the Indians thus far this year, will go for a season sweep of the Tribe on Wednesday, Sept. 16. Chicago lefty Jon Lester (2-2, 5.05) and Cleveland righty Aaron Civale (3-5, 3.88) are slated to start on the hill. The first pitch will be thrown at 7:15 p.m. CDT on a clear, warm night in Chi-Town.