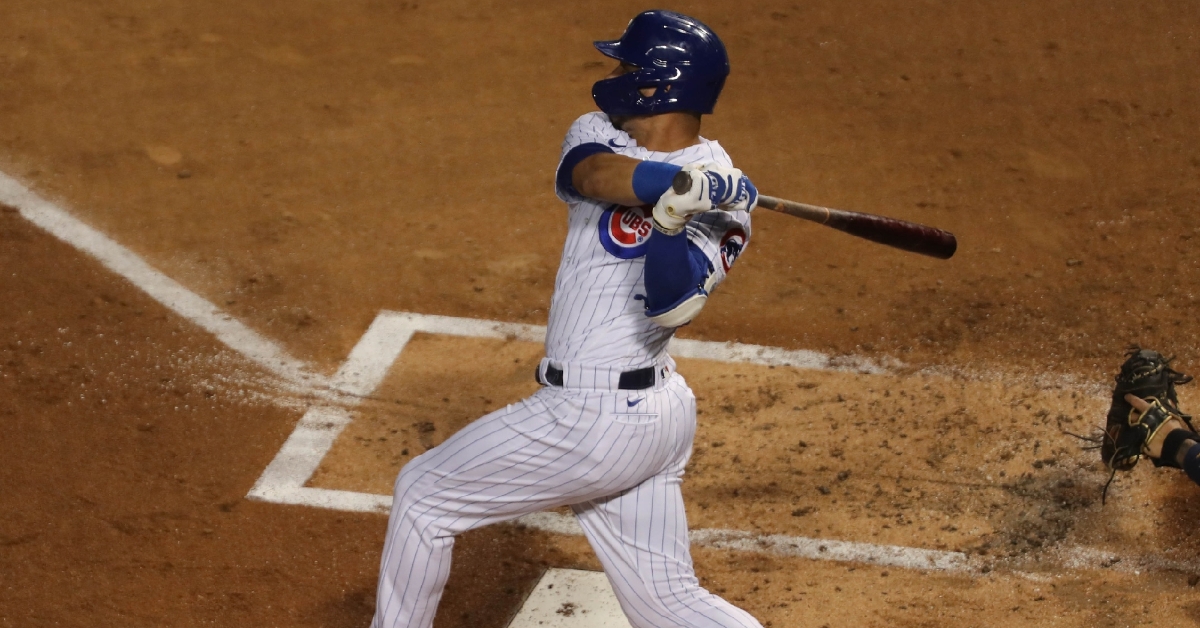 As a result of his great performance, Willson Contreras now has five home runs and 17 RBIs to his name. (Credit: Dennis Wierzbicki-USA TODAY Sports)

CHICAGO — Continuing on his collision course with the Cy Young Award, Yu Darvish produced a stellar seven-inning start for the Chicago Cubs (23-15) on Friday and was bolstered by a big night at the plate for Willson Contreras, who served as the Cubs' designated hitter. Contreras drove across all four of the Cubs' runs in the North Siders' 4-1 win over the rival St. Louis Cardinals (14-15).

The opener of a five-game set at Wrigley Field saw Contreras go 3-for-4 and hit a pair of clutch two-out singles and a 412-foot solo home run. Contreras outhit the entire St. Louis lineup, which mustered just two hits. Darvish struck out 11 and issued zero walks, while Cardinals starter Jack Flaherty threw 43 pitches in a grueling first frame and made it through just 2 2/3 innings on the mound.

B1: Ian Happ missed the contest due to a facial contusion, so Kyle Schwarber served as the leadoff man. After Schwarber struck out, Kris Bryant doubled, and Anthony Rizzo walked. Javier Baez then struck out, but Contreras kept the inning alive with a hard-fought nine-pitch at-bat, in which he tagged Flaherty for a two-run single. Victor Caratini left Baez and Contreras stranded via an inning-ending groundout.

T2: The Cardinals went down in order their second time up.

B2: Flaherty fared much better in the bottom of the second, fanning two batters as part of a scoreless frame.

B3: With two outs and runners on the corners, Contreras stepped up again with an RBI base knock that plated Baez. Baez originally reached on a fielder's choice before advancing to third on a single by Jason Heyward. After falling down 3-0, Flaherty was relieved, having thrown 69 pitches.

T4: Darvish breezed through the fourth.

T5: Striking out the side, Darvish remained perfect through five innings pitched.

B5: Chicago did not reach base in the fifth.

T6: Notorious Cub killer Matt Carpenter put an end to Darvish's bid for a perfect game by cranking a leadoff homer, which marked the 150th long ball of his career. Darvish collected three outs in a row after that.

B6: With one away, Contreras took Jake Woodford deep on a solo blast that neutralized Carpenter's dinger, giving "Big Willy" his first game with at least four RBIs since June of 2019. Maybin singled with two outs and made it to second on a wild pitch, but Jose Martinez struck out against his former team and left Maybin stranded.

T7: The Cardinals went three up, three down in the final inning of Darvish's masterpiece.

B7: Cardinals reliever Tyler Webb somehow failed to catch a routine popup off the bat of Rizzo. The error resulted in Webb being pulled with two outs and Rizzo on first. Baez singled after the pitching change before Heyward flied out.

T8: A Yadier Molina single was all that Rowan Wick gave up in the eighth.

B8: Caratini walked, and Nico Hoerner singled in a scoreless inning.

T9: Jeremy Jeffress earned the save by finishing off the Cardinals in the ninth. Following a one-out walk, Baez made a great play at second base, tagging the bag with the baseball after fielding a tricky grounder and firing to first to complete a game-ending 6-3 double play. The Cards failed to place a runner in scoring position the entire night.

In the wake of the win, Darvish, who struck out half of the batters he faced on the evening, now stands at 7-1 with a 1.44 ERA. Flaherty fell to 2-1 with the loss. Wick notched his fourth hold, and Jeffress picked up his fifth save.

.@faridyu struck out 11 of the 22 batters he faced tonight! ?? pic.twitter.com/dClv1Hdmks

Up Next: Because of the postponed series from the Cardinals' COVID-19 outbreak, Saturday, Sept. 5, will feature a doubleheader at the Friendly Confines. It marks the last remaining doubleheader currently scheduled for the Cubs. The first matchup will begin at 4:15 p.m. CDT on a warm, sunny afternoon in Chi-Town. In a pitching battle of young versus old, 25-year-old Cubs righty Adbert Alzolay (0-0, 0.00) will go toe to toe with 39-year-old Cardinals righty Adam Wainwright (3-0, 2.65).