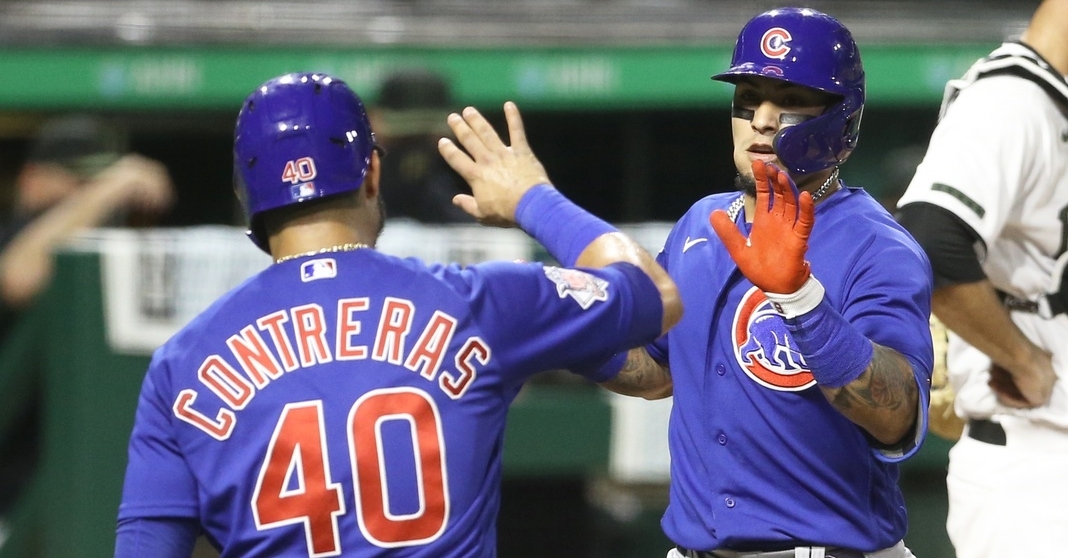 Javier Baez's epic three-run shot provided the Cubs with a lead that they did not relinquish. (Credit: Charles LeClaire-USA TODAY Sports)

PITTSBURGH — For the second straight night, the Chicago Cubs (22-14) scored eight runs in a win over the Pittsburgh Pirates (10-24), except, this time, the North Siders won comfortably. Tuesday's series opener was an 11-inning contest that saw the Cubs win 8-7, and Wednesday's matchup at PNC Park was an 8-2 Chicago victory.

A go-ahead three-run homer by Javier Baez in his 700th career game put the Cubs ahead 3-1 in the top of the fourth, and the Buccos trailed the rest of the way. A six-inning, six-strikeout performance on the mound by Kyle Hendricks paced the Cubs, who won their third straight and assured themselves of a series victory in the three-game set in the Steel City.

T1: Tuesday's contest featured an in-game rain delay that lasted a little over an hour, and the start of Wednesday's matchup was delayed by a little over an hour due to a pregame rain delay. Former Cubs pitcher Derek Holland was initially supposed to start for the Pirates, but Joe Musgrove, who was activated off the injured list earlier in the day, made the start. He gave up a leadoff double to Ian Happ right off the bat but kept the Cubs scoreless through one.

B1: Hendricks was taken for a two-out single but nothing else in a scoreless first.

T2: Musgrove struck out two in a 1-2-3 second. In his first at-bat since being activated off the injured list on Tuesday, Steven Souza Jr. struck out swinging.

B2: Colin Moran led off the bottom of the second with a 450-foot solo bomb that ended up in the Allegheny River. Gregory Polanco doubled a few at-bats later but was left stranded.

T3: The Cubs went down in order their third time up to bat.

B3: Adam Frazier drew a leadoff walk, but he was picked off and then tagged out on a futile steal attempt.

T4: A Willson Contreras single and an Anthony Rizzo double resulted in a pitching change. On his first pitch, reliever Nick Tropeano threw a splitter over the plate that Baez walloped out to left. The three-run jack sailed 443 feet. Later, Cameron Maybin, who was making his first start with the Cubs, doubled, and a walk of David Bote was followed by a catcher's interference drawn by Nico Hoerner. With the bases loaded, Happ fouled out to end the half-inning.

B4: Back-to-back two-out singles failed to lead to runs being scored.

T5: Holland was brought into the game at the start of the fifth, and he worked a three up, three down frame.

B5: Frazier reached on an infield single but did not advance beyond first base.

T6: Other than a leadoff walk of Souza, the top of the sixth was uneventful.

B6: In his final inning of work, Hendricks kept the Pirates off the bases.

T7: Hoerner hit a leadoff base knock against Holland and made it to third on a Contreras single. Heads-up baserunning enabled Contreras to reach second on the throw back to the infield. Rizzo then plated both baserunners with a two-run single hit up the middle. Holland balked, allowing Rizzo to take second, and Moran committed a fielding error on a ground ball off the bat of Baez. Neither Rizzo nor Baez scored, though, as Souza struck out, and Jose Martinez grounded out to end the half-inning.

B7: Ryan Tepera gave up a leadoff dinger to Anthony Alford that traveled 428 feet. Tepera recorded three straight outs after that. Hoerner made a great play to record the second out, as he pulled off a jump throw to first after fielding a chopper hit to second by the speedy Cole Tucker, who was outed in the nick of time.

T8: With two outs and two men on, Contreras barreled an RBI double to left-center. Then, Newman let a routine grounder hit by Rizzo roll under his glove, which permitted two runs to come home.

T9: Holland finished off his outing with a three up, three down ninth.

B9: After getting called up earlier in the day, Jason Adam pitched the ninth for the Cubs and wrapped up the victory. Hendricks was credited with the win, making him 4-4, and Musgrove was handed the loss, making him 0-4. Taking part in his 700th career game, all of which have been played in a Cubs uniform, Baez went 1-for-5 with one strikeout. After coming up clutch in multiple at-bats during his MLB debut on Tuesday, Pirates third baseman Ke'Bryan Hayes cooled off in his second big league appearance, going 0-for-4 and striking out three times.

Up Next: The Cubs will aim for a sweep of the Pirates in the Thursday, Sept. 3, series finale. As of now, the contest is slated for 12:35 p.m. CDT, but steady rainfall is highly likely in Pittsburgh during the early afternoon hours. Chicago's Alec Mills (3-2, 5.23) and Pittsburgh's JT Brubaker (0-0, 4.50) will start on the bump in a battle of right-handers.