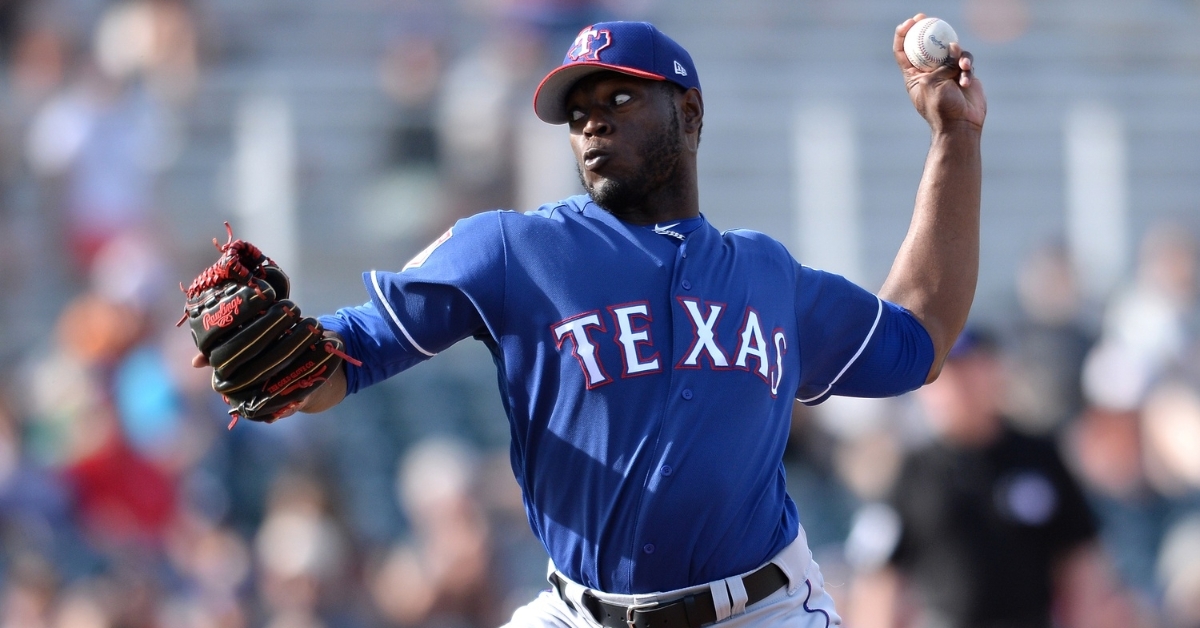 From all of us at CubsHQ, Happy Thanksgiving from our family to yours. May the turkey come out juicy, may the stuffing be moist, and may each of you and your families enjoy a happy, healthy, and safe Thanksgiving.

More than anything else, if you plan to “celebrate,” please drink responsibly.

The #Cubs today claimed LHP C.D. Pelham off waivers from the Rangers. pic.twitter.com/0ZoXDKxrjt

Much like the acquisition of Jharel Cotton from the A’s, I’m a little conflicted about this signing. Pelham’s 2019 results were horrific, but then again, he’s only 24 years old, and his fastball travels in the upper-90s. The Cubs will undoubtedly bury him in the roster in Des Moines and hope for the best, so all we can do is wait and see.

Robel Garcia: After a quick start and an even faster fade in 2019, Robel Garcia is taking on some winter work in the Dominican Republic.

After showing off his power in @MiLB and #MLB this year, #Cubs No. 26 prospect Robel Garcia is flexing his muscles in the @LIDOMRD.

Not much could have been expected from Garcia last year, as he transitioned from an Italian League to MLB. He started strong (offensively), but quickly found himself chasing bad pitches while trying to establish himself as a power hitter. His fielding was rough at the beginning, but Garcia was able to settle down some, making himself at least a viable option defensively (second base). Additional time in the sub-major league levels may prove to be what Garcia needs to continue growing.

Trade target? If the Cubs can’t be content with issuing the fifth spot in the rotation to either Tyler Chatwood or Alec Mills, Baltimore is reportedly working hard to find a trade partner to offload righty Dylan Bundy. Bundy is projected to earn $5.7M in arbitration this winter.

Bundy did experience some control problems in 2019, delivering seven wild pitches and beaning six men, but when you consider the fact that he faced 700 batters this past season, the numbers fall back in line.

"There's a reason I want to be here all offseason."

Days after his first @MLB season with the @Cubs ended, @nico_hoerner was back on The Farm working to finish his degree. #GoStanford #NextStartsNow pic.twitter.com/W3afLfOANs

Carl Edwards Jr.: After disappearing from the radar after being dealt to San Diego, Carl Edwards Jr. will now be wearing a Mariners’ uniform. Fortunately for Edwards, this is a major league deal, worth $950k guaranteed and an additional $500k in possible incentives.

I’m seeing a lot of these 10 year challenge posts. Here’s a 40 year challenge of me and Billy Williams. We still got it? #cubs #billywilliams #fergiejenkins #10yearchallenge pic.twitter.com/T0z3nCSdpx

Baseball Quotes: “Every pitch has a purpose. Sometimes he knows what he's going to throw two pitches ahead. I swear, he makes it look like guys are swinging foam bats against him.” -John Smoltz on Greg Maddux

Throwback to when Michael Jordan asked for Ken Griffey Jr's autograph, then gave him his jersey off his back ????
pic.twitter.com/Iw37TXuyrc

Brewers: While the Cubs were busy claiming CD Pelham from the Padres, the Brewers took their off-season to a new level yesterday, swinging a trade with the Friars for infielder Luis Urias and lefty starter Eric Lauer, while shipping right-handed starter Zach Davies and outfielder Trent Grisham to San Diego.

Davies had an impressive 2019, but the Crew is looking add left-handed depth to the rotation with Lauer while filling the void left by Moustakas with Urias. Moustakas offered coverage at both second and third, but not only does Urias add depth at short – something Moustakas can’t do – he’s also nine years younger than Moose.

Pirates: The Pirates have taken another step toward rebounding from a season which they’ll (unfortunately) not likely forget anytime soon. Yesterday, the team announced that Derek Shelton would replace Clint Hurdle as the team’s manager.

The Pirates have hired Derek Shelton as our 41st Manager of the organization.

Shelton has 15 years of coaching experience and spent the last two seasons as the bench coach of the Minnesota Twins. pic.twitter.com/nbm6Es4Qoc

Padres: In addition to the Cubs taking Pelham and the deal with the Brewers, the Padres have signed free-agent reliever, Drew Pomeranz.

D-Backs: Arizona has signed catcher Stephen Vogt to a guaranteed $3M deal, with the possibility for Vogt to make up to $7M for two years.

Stephen Vogt will receive a one-year deal worth $3 million, and a vesting option that could make the total deal worth $7 million, per a source.

Marlins: According to Derek Jeter, the Marlins will not shy away from pursuing free agents this winter.

Right-hander Kyle Gibson and the Texas Rangers are in agreement on a three-year, $30 million deal, sources tell ESPN.

It’s the first move in what’s expected to be a very busy winter for the Rangers as they head into their new stadium. They need pitching. Gibson is first step.