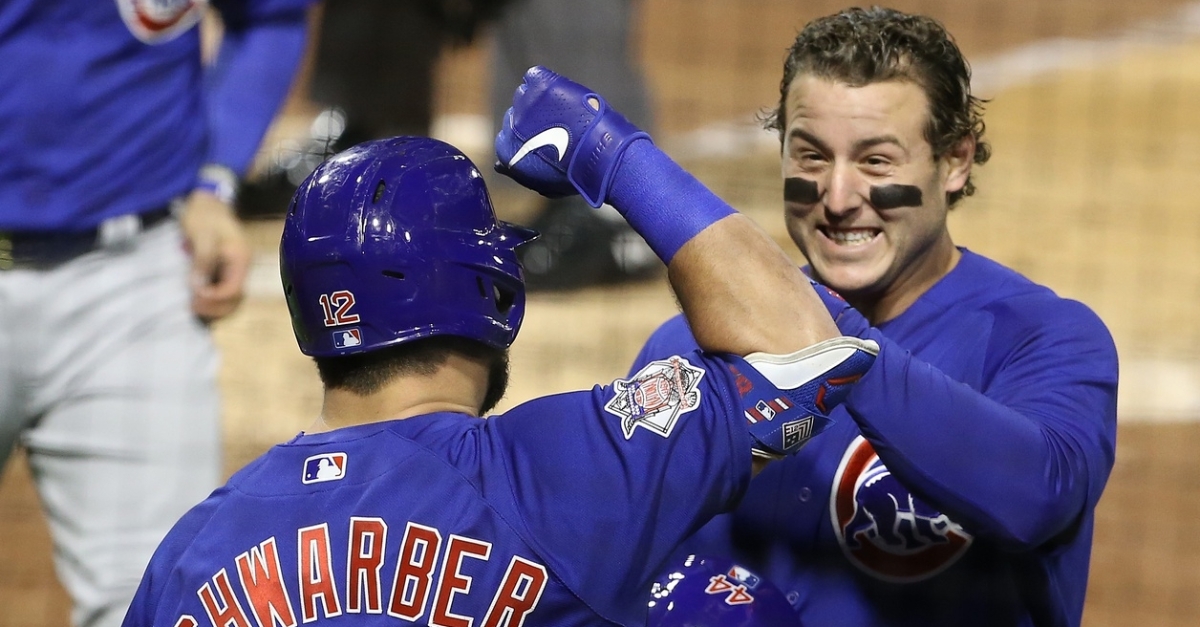 On the first day of fall, the Cubs fell to the Pirates but clinched a postseason berth, thereby extending their autumn run. (Credit: Charles LeClaire-USA TODAY Sports)

PITTSBURGH — A celebratory eighth inning transitioned into a disappointing ninth inning for the Chicago Cubs (32-23) on Tuesday. After failing to score a run through 7 2/3 innings the plate, the North Siders tied up the Pittsburgh Pirates (16-39) via a clutch two-run homer off the bat of Anthony Rizzo. Mere minutes later, a walkoff home run in a separate game clinched a postseason berth for the Cubs.

The Pirates prevented Chicago from experiencing an all-around perfect night, though, as Jacob Stallings smacked a walkoff solo bomb in the bottom of the ninth at PNC Park. Pittsburgh won game two of the four-game series by a final tally of 3-2. Rizzo's dinger, which marked the first Cubs home run in nine days, was the only extra-base hit that the Cubs were able to muster in the loss.

The #Cubs have officially clinched a spot in the postseason! #FlyTheW pic.twitter.com/O3q0lmr7Cm

With the Phillies loss to the Nationals, the @Cubs have clinched a postseason spot! pic.twitter.com/nNlEZeUwyV

T1: Steven Brault walked Ian Happ to begin the game. Willson Contreras struck out after that, and a "strike 'em out, throw 'em out" double play ended the half-inning, as Happ was thrown out attempting to steal second right after Rizzo struck out.

B1: Fresh off the injured list, Jose Quintana made his first start of the season after making two bullpen appearances earlier in the season. Quintana has dealt with multiple significant injury issues that have drastically affected his 2020 campaign. Working with a pitch count, Quintana was able to toss two innings of one-run ball on the evening, including a 1-2-3 first frame.

T2: The Cubs were sat down in order their second time up to the plate.

B2: Gregory Polanco hit a two-out single and reached second on a wild pitch. Quintana then gave up an RBI double to Erik Gonzalez that enabled Polanco to score standing up.

B3: Adbert Alzolay, who was called up on Monday, struck out a pair in a three up, three down third.

T4: Brault beaned Contreras and Rizzo on back-to-back pitches. Javier Baez then grounded into a 5-4-3 double play, and, with Contreras at third, Kyle Schwarber struck out.

B4: Alzolay kept the Buccos off the bases in another successful inning of work.

T5: Maybin collected an infield hit with one out, and Nico Hoerner reached via a two-out base on balls. Happ grounded out to leave both of them stranded.

B5: Alzolay walked Polanco to start the bottom half of the fifth. After striking out Gonzalez, Alzolay was taken for an RBI double hit by Adam Frazier. Polanco scored, and Frazier was thrown out attempting to stretch his double into a triple.

T6: Other than a one-out single by Rizzo, there was nothing doing for the Cubs in the sixth.

B6: With one away, Ke'Bryan Hayes singled, and Jose Osuna walked. Alzolay then forced Josh Bell to ground out, placing runners at second and third, and struck out Stallings to end the inning.

T7: Brault breezed through the top of the seven, which ended with Jose Martinez striking out swinging. Martinez has gone 0-for-19 with one walk since being acquired by the Cubs at the trade deadline.

B7: Kyle Ryan took the mound for the second game in a row, and he sat the Bucs down in short order in his sole inning pitched.

T8: Chris Stratton relieved Brault prior to the eighth and, after outing the first two batters he faced, issued a two-out walk of Contreras. Left-hander Sam Howard was brought in to face the left-handed Rizzo, but the pitching change did not work out for the Pirates, as Rizzo took Howard deep on a 367-foot jack. The two-run round-tripper hit into the right field corner marked Rizzo's 10th home run of the season and his first of the year off a lefty. Howard recovered and forced Baez to fly out in the next at-bat.

B8: Ryan Tepera collected two outs before walking Hayes and getting relieved by Andrew Chafin. Making his second appearance in a Cubs uniform, Chafin quickly drew a fielder's choice groundout to escape the inning.

B9: Chafin returned to the hill and struck out Bell to kick off the bottom of the ninth. The next at-bat proved to be the game's final plate appearance, however, with Chafin giving up a walkoff tater to Stallings. Stallings' 393-foot solo blast to left served as the first home run allowed by Chafin since he became a Cub.

Chafin received the loss, dropping him to 1-2 on the year, and Rodriguez moved to 3-2 overall by way of the win. Stratton tabbed his fourth hold, and Howard suffered his second blown save. With five contests left, the Cubs stand four games atop the National League Central.