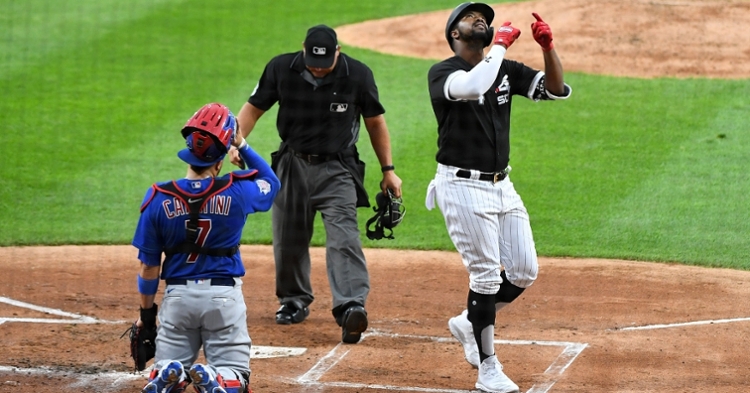 Eloy Jimenez crushed a grand slam in the bottom of the first, putting the White Sox ahead by five runs. (Credit: Mike Dinovo-USA TODAY Sports)

CHICAGO — A rough first inning for Chicago Cubs starting pitcher Yu Darvish provided the Chicago White Sox with a commanding lead that they did not relinquish. Former Cubs prospect Eloy Jimenez, who was traded to the White Sox for hurler Jose Quintana in 2017, smacked a first-inning grand slam that put the White Sox up 5-0. The South Siders went on to defeat the North Siders 5-3.

Playing the second of back-to-back exhibitions against one another as part of MLB's three-game "Summer Camp," the Chicago foes faced off at Guaranteed Rate Field on Monday evening. Darvish allowed the first five batters of the game to reach base, including Jimenez, resulting in the 5-0 tally. The Cubs were able to plate three runs in the seventh, thanks to a pair of errors, but the White Sox held on to go 2-0 in the home-and-home exhibition series.

B1: Darvish struggled out of the gate, giving up a leadoff double to Tim Anderson that was followed by an RBI single from Yoan Moncada. The first five White Sox batters all reached base, including Jimenez, who crushed a grand slam to put his club up by five.

T2: Kyle Schwarber led off with a single, but Steven Souza Jr. then grounded into a 4-6-3 double play. After that, Jason Heyward popped out.

T3: Keuchel drew three groundouts in a row for an easy outing.

B3: Darvish walked a batter with one out but enacted revenge on Jimenez by forcing him to hit into an inning-ending double play.

T4: Keuchel continued to dominate in the fourth, tabbing a pair of groundouts before striking Javier Baez out swinging.

B4: Souza misread a fly ball that hit off the top of his glove in left field, resulting in a two-bagger for Avisail Garcia. Darvish escaped the inning unscathed, though.

T5: Keuchel's dominance persisted, as the Cubs were sat down in order.

B5: Anderson hustled for an infield single, and Darvish was pulled having thrown 67 pitches. James Norwood entered in Darvish's wake and worked through the rest of the inning.

T6: Keuchel was removed after recording the first out. The Cubs proceeded to remain listless offensively.

B6: Ryan Tepera registered three straight outs in a relief stint for the North Siders.

T7: With Anderson out of the game, Danny Mendick manned shortstop for the White Sox and committed errors on back-to-back plays, spoiling two double play opportunities. That came after Kris Bryant knocked a leadoff single. Hernan Perez, who pinch ran for Bryant, scored on the second error. Schwarber drove home another run with an RBI single. Mendick was finally able to turn two soon after that, but a third run scored on the double play.

B7: Veteran reliever Jeremy Jeffress tossed a scoreless seventh for the Cubbies.

T8: A flyout and two lineouts prevented the Cubs from cutting any further into their deficit.

B8: Cubs closer Craig Kimbrel pitched the eighth and kept the White Sox in check.

T9: Young Cubs catcher Josh Phegley smacked a double to deep left field with two outs. Daniel Descalso then pushed him to third with a base knock, but White Sox closer Alex Colome ended the game by forcing Souza to fly out.

Up Next: After an off day on Tuesday, the Cubs will play their third and final exhibition of the summer. The Minnesota Twins will head to Chicago for a Wednesday, July 22, contest at Wrigley Field that will commence at 6:05 p.m. CDT.