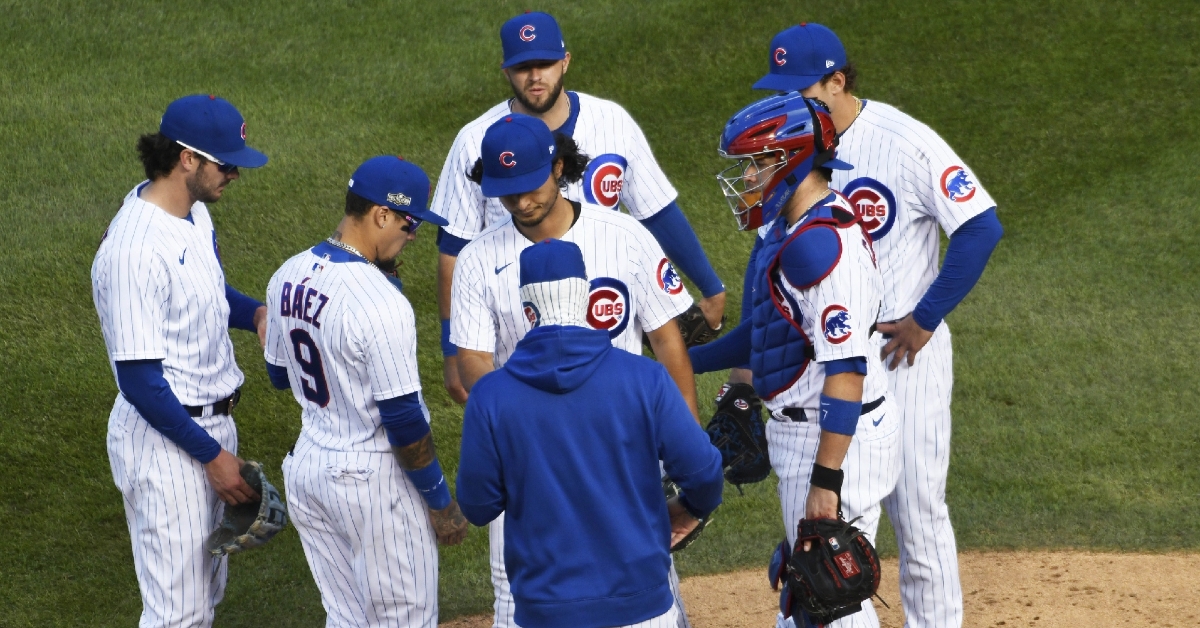 CHICAGO — Ending their season in impotent fashion, the Chicago Cubs (0-2) failed to score a run in Game 2 of their National League Wild Card Series versus the Miami Marlins (2-0) on Wednesday. Cubs ace Yu Darvish was superb until giving up a two-out home run in the top of the seventh. Fireballer Sixto Sanchez produced a scoreless outing on the mound, and the Cubs failed to turn things around at the plate after he was relieved.

Willson Contreras was gunned down at the plate, wasting the Cubs' best scoring opportunity of the afternoon at Wrigley Field, as the North Siders could have boasted a bases-loaded situation with one out in the bottom of the fourth. All in all, Chicago went 1-for-8 with runners in scoring position and left nine men stranded on base. The Marlins, who also defeated the Cubs in the 2003 National League Championship Series, improved to 7-0 all time in playoff series and advanced to the National League Division Series.

T1: Darvish made quick work of the Marlins in the top of the first, tallying a strikeout as part of a 1-2-3 inning.

B1: The Cubs went down in order their first time at the plate. Anthony Rizzo was rung up by home plate umpire Will Little on a strike-three call that he did not agree with. Sanchez recorded two strikeouts in the bottom of the first.

Sixto Sanchez is going to be a problem. #Marlins pic.twitter.com/AQqDIM7RO0

T2: Matt Joyce drew a two-out walk, with a Darvish cutter barely missing the zone on a full count. Darvish then forced Miguel Rojas to ground out, as David Bote fielded the grounder in the 3-4 hole and made a spinning throw to Rizzo at first for the out.

B2: After outing the first two batters of the bottom of the second, Sanchez let a pitch get away from him on an 0-2 count, and the 101-mph heater hit Jason Heyward in the leg. Heyward was not injured on the hit by pitch, and he took first base, only for Javy Baez to strike out swinging in the next at-bat.

B3: With two outs, Ian Happ notched the first hit of the game, sending an inside pitch to the opposite field for a bloop single. Rizzo lined out after that.

T4: Darvish worked himself out of a jam in the fourth. Jon Berti led off with a single, and Jesus Aguilar was hit by a pitch in the plate appearance that followed. Brian Anderson then swung at the first pitch and grounded into a routine 6-4-3 double play. With Berti at third, Darvish left him stranded by striking out Garrett Cooper on a wicked slider. Darvish was fired up as he walked off the mound.

Yu is pumped up. pic.twitter.com/KreIO4dVXy

B4: A questionable baserunning decision cost the Cubs. Sanchez struggled with his command in the bottom of the fourth, walking Contreras, who served as the Cubs' designated hitter, and Kyle Schwarber to begin the half-inning. Kris Bryant then lined out to second, and Contreras slid back to the bag in the nick of time, preventing him from being doubled off. Heyward smacked a broken-bat single to right, and Contreras attempted to score. Joyce gunned Contreras down, though, with catcher Chad Wallach extending to apply the tag. With runners on the corners, Baez flied out to usher in the fifth inning.

You're not E.T., and you can't go home. pic.twitter.com/M77ULYdsBo

T5: The Cubs returned the favor by gunning down a Marlins baserunner in the top of the fifth. With one out, Rojas drilled a shot that ricocheted off the wall in left-center. Schwarber, who started in left field, quickly fielded the ball and hurled a laser to Bote at second. Rojas was initially called safe, but a Cubs challenge revealed that Bote applied the tag right before Rojas touched the bag. Schwarber's outfield assist helped the game remain scoreless. Prior to that, Heyward made a great running catch in the right field corner, preventing Joyce from tabbing a leadoff hit.

B5: Continuing with their season-long hitting woes with the bases loaded, the Cubs were unable to score after Contreras was plunked to load the bases with two outs. Victor Caratini and Happ each singled to left with one out, and, following the two-out HBP of Contreras, Schwarber flied out to left and slammed his bat to the ground in frustration.

T6: Darvish worked a three up, three down sixth. He hustled to cover first base when Dickerson grounded out to first, catching the flip from Rizzo and stepping on the bag for the putout.

B6: Brad Boxberger relieved Sanchez prior to the bottom of the sixth. The Cubs did not reach base, hitting into two flyouts and one groundout.

T7: One swing of the bat changed the trajectory of Darvish's outing. With two outs, Cooper swung on a 2-2 count and made perfect contact on a hanging slider, depositing a 370-foot solo shot into the left field bleachers. Joyce followed that with a double to left-center that a diving Happ was not quite able to catch. Thereafter, Rojas was intentionally walked, and Darvish then got taken for an RBI single off the bat of Magneuris Sierra. The base hit was slapped through the infield and into right, and Lewis Brinson, who pinch ran for Joyce, scored. Craig Kimbrel relieved Darvish at that point and struck out Wallach to stop the bleeding.

COOP THERE IT IS pic.twitter.com/ugEm7LmT2C

B7: After Boxberger garnered the first out on a Bote flyout, Richard Bleier relieved him. Bleier's quick reflexes prevented him from getting drilled by a comebacker from pinch hitter Cameron Maybin that sported an exit velocity of 100 mph. Bleier blocked the line drive with his glove and quickly recovered, fielding the ball and firing a throw to first that Cooper was able to scoop up before Maybin reached the bag. Happ proceeded to hit a chopper up the middle that resulted in the third out.

T8: Kimbrel returned to the bump and walked Dickerson to kick off the eighth frame. Speedster Monte Harrison pinch ran for Dickerson and stole second without facing a throw from Contreras, who took over behind the plate in the wake of Maybin pinch hitting for Caratini. Berti drew a walk, but Aguilar then grounded into a 6-4-3 double play. With Harrison on third, Kimbrel struck out Anderson to end the half-inning.

B8: An interesting turn of events took place with Contreras in the batter's box and Yimi Garcia pitching. Contreras led the majors in HBPs during the regular season, and he drew two in the same plate appearance on Friday, with one of them being waved off. Little ruled that Contreras leaned into a pitch that hit his elbow guard, and Cubs manager David Ross came onto the field to discuss the decision with Little. Soon afterward, Contreras was again hit on the left elbow, and that particular hit by pitch counted. Contreras seemed to bark at both Garcia and the crew chief, who was the third base umpire in the contest, while walking up the baseline. Garcia kept the Cubs off the scoreboard, though, and Contreras continued to air his grievances while heading to the dugout.

Wilson Contreras does NOT like being hit by a pitch pic.twitter.com/YXTKkrWqXB

T9: Jeremy Jeffress toed the rubber in the top of the ninth and drew three groundouts in a row. Cooper began the inning by grounding back to Jeffress, who threw a dart to Rizzo for the out.

B9: Former Cub Brandon Kintzler came out of the bullpen with a save on the line. Heyward led off with an opposite-field double. "J-Hey" drove a two-bagger to left, and Baez then stepped up to the plate. After fouling a pitch off his calf, "Javy" looked at strike three. Bote struck out in a similar manner, watching strike three hit the catcher's mitt. Bote disagreed with the strike-three call, however, and he argued with Little about it before retreating to the dugout. With the Cubs sacrificing their usage of a designated hitter by placing Contreras behind the ditch, Jason Kipnis pinch hit in the pitcher's spot in the batting order and struck out swinging to end the Cubs' season.