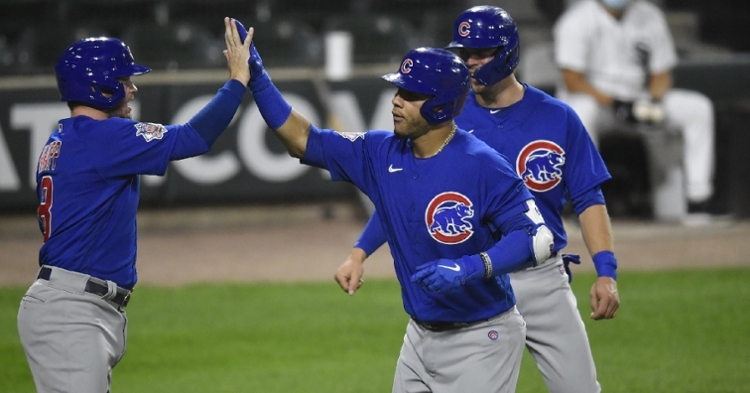 As difficult as it is to believe, the Cubs offense woke up from another prolonged slump to put up 25 runs against the Sox in three games. That helped the Cubs win two of three against the South Siders to split the Cross-Town series this year.

From a record standpoint, the Cubs finished 34-26, which was good enough to earn a division championship. The White Sox have not played well to finish the season, but still won 35 games this season and earned a playoff spot of their own despite taking third in the AL Central. I know this is just one series, but when the offense struggled as much as it did for most of September, this could be the series they need to jump-start them ahead of the postseason.

Here are some takeaways from the weekend.

Bring on the Fish: For the third time in the last five years and the first time since 2017, the Cubs are the kings of the NL Central. Say what you want about their play the final month of the season as many felt they backed into the playoffs and didn't earn it. When four teams from your division make up 50% of the National League field, maybe your division is tougher than most thought or that everyone is equally as balanced from the top down.

The Cubs helped their postseason cause by starting the season 13-3. From that point on, Chicago went two games under .500, but their big early division lead proved to be the deciding factor. At 34-26, the Cubs earned the No. 3 seed in the National League and will host the wild card series at Wrigley. Anything can happen postseason, but with the Marlins as the sixth seed, this could be the best possible matchup for the Cubs as they avoid teams like the Reds and Cardinals in a best of three.

White Sox continue to pound lefties: Jon Lester entered his final regular-season start on a role. He looked like postseason Lester once again as he posted a sub 2.00 ERA across his last three outings. That was until he faced off against the Southsiders, where Lester continued to be victimized by that lineup.

For the second time this season, the White Sox pounded Lester chasing him before the fifth inning. This shouldn't surprise anyone as the White Sox have the best lineup when it comes to hitting lefties. The start we saw from Lester was to be expected against this team, and nothing should be taken from it. It was a bad matchup going in, and the White Sox exploited the matchup early and often.

The Cubs are thankful they don't have to see the White Sox more than they do because this is a very dangerous lineup. The White Sox certainly didn't help themselves over the final two weeks of the season, but all it takes is two games where they offense gets hot and who knows what could happen postseason. Should the Cubs see them again in the postseason, expect them to avoid as many lefties as possible.

As of last Thursday, the White Sox had just taken 3 of 4 from the Twins and were up 3.0 games in the AL Central.

Their odds to win the division were over 90 percent.

Chicago is going to finish the season by losing 7 of 8. (And the division.)

Kris Bryant and the offense awaken: I guess the best way to irritate Kris Bryant is to criticize his game. That seemed to work this weekend as he returned from a four-game absence to hit two homers and drove in 6 runs this weekend. The same thing can be said about the Cubs offense as they pounded across 25 runs in this three-game set, including 10 on both Friday and Saturday.

The Cubs offense has taken their fair share of criticism this season as one again, the inconsistent production is puzzling. It isn't just one game here or there, but instead, it seems like this team goes two weeks where they can't do anything before having a few games where it looks like 2016 all over.

Three games certainly isn't going to make a difference, and fans shouldn't expect this weekend's series to wake up the bats suddenly. However, it was nice to see this team remember who they are and what makes them so successful. This is a team predicated on taking walks, driving the ball the other way, and slugging opponents to death. For some reason, that has gone away for most of the season but returned this weekend at the perfect time.

Kris Bryant is on a warpath. pic.twitter.com/cCYJpM9Hpk

Young arms show future is bright: While the offense took center stage this weekend, Cubs fans got a glimpse of the Cubs pitching future as the bright arms took center stage Sunday. For the second straight outing, Adbert Alzolay showcased his new slider and flat out dominated with it. Before getting sent back to South Bend earlier this month, Alzolay was a three-pitch pitcher who couldn't put hitters away consistently.

Now, he is a four-pitch pitcher, and his newly discovered slider is nasty. Alzolay was not only auditioning for a spot on the postseason roster but for a possible start in the Cubs postseason rotation depending on how deep they go. I think he has at least earned one crack at it, and the Cubs may have found someone to replace one of their departing starters next season.

However, a rookie stole the show on Sunday, although his results were not so great. I am talking about the Cubs top prospect in Brailyn Marquez as he made his major league debut. Fans have been calling for him all season, but Theo continued to say he was not ready and needed some work. After working on his secondary pitches to pair with that big heater, the Cubs added Marquez to the postseason roster and felt the need to see him in action yesterday.

While the results were not the greatest, you could see the potential Marquez has. He has what I like to call easy velocity as his heater sat in the 97-99 range without much effort. His changeup looks greatly improved, and his slider has the potential to be a good number three pitch. Nerves got in the way yesterday, and Marquez struggled to throw strikes.

The Brailyn Marquez arsenal told by the best 3 pitches of his MLB debut. This is the video that answers the question of why he’s a top prospect. pic.twitter.com/pk3MWu9NcF

The performance he showed yesterday showed he might not be ready to contribute on the postseason roster this season and showed he will be a significant part of the Cubs future. Chicago hasn't done a great job developing pitchers recently, but yesterday showed that help is on the way sooner rather than later.